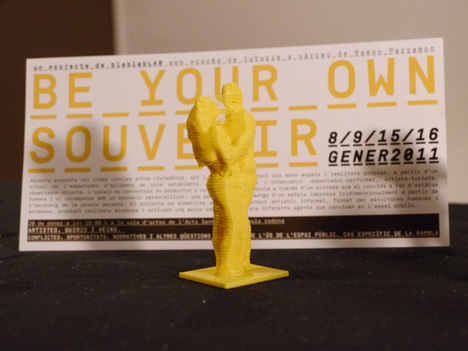 Earlier this year, Barcelona's blablabLab piloted an attraction called "Be Your Own Souvenir" on Las Ramblas, the main tourist thoroughfare in the city they call home. It's essentially the 'Souvenir Penny' 2.0: lucky tourists posed for three Kinect sensors to generate a full-body scan, which is translated into a 3D-printed figurine of said tourist. 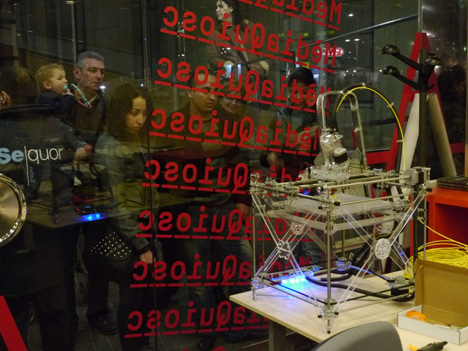 For two weekends in January, "Be Your Own Souvenir" demonstrated the potential for new technology to invert the relationship between artist and audience: "spectator-performer, artist-tourist, observer-object." The user becomes the producer as well as the consumer through a system that invites him/her to perform as a human statue, with a free personal souvenir as a reward: a small figure of him/herself printed three-dimensionally from a volumetric reconstruction of the person generated by the use of three structured light scanners (kinect)... The project mimics the informal artistic context of this popular street, human sculptures and craftsmen, bringing diverse realities and enabling greater empathy between the agents that cohabit in the public space.

Video after the jump:

Inside the black box:All the software used in this project is free and open. Custom software has been developed using openFrameworks and openKinect in order to produce a tunable full 360 degree point cloud. Using a midi controller, the three differents input pointclouds (3 Kinects) can be adjusted in space and resolution. The resulting combined point cloud is processed by Meshlab to produce a mesh reconstruction. Skeinforge takes the mesh, previously cleaned up through Blender, and outputs a gcode file, which can feed a cnc machine (Rapman 3.1). 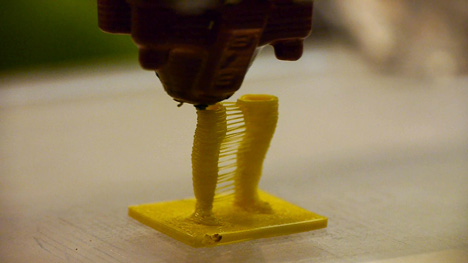 Unfortunately, the Rapman represents a decidedly un-scalable limiting factor: it takes about 10 minutes to actually print the figurine... not quite instant gratification. 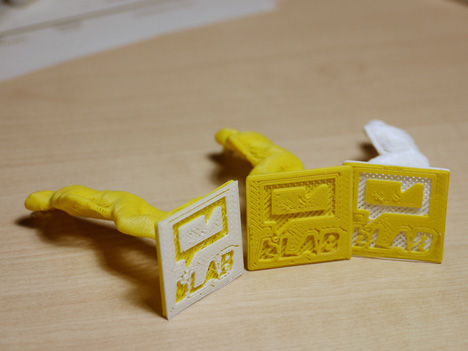 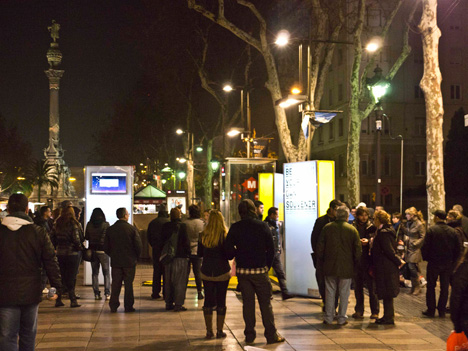 Shapeways had the opportunity to talk to blablabLab about a month ago; it's definitely worth perusing for more details about the project, especially since there is a forgivable lack of details on blablabLab's project page. (To their credit, they do have more information on the Vimeo page, as well as images on their Flickr.)