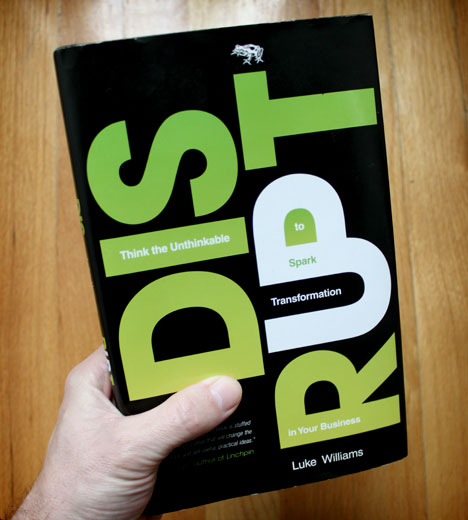 Luke Williams' new book Disrupt opens with a quote from Jerry Garcia, so you know it's going to be different: "We do not merely want to be the best of the best. We want to be the only ones who do what we do." That said, Williams' core thesis is not a new one: The only way for a business to succeed is to cultivate disruptive innovation, even if it disrupts their existing business.

The strategy of incremental improvement used by most major companies is virtually guaranteed to paint them into a corner because real change happens not only in increments but also in sudden fits and starts. Williams refers to the late Stephen J. Gould's idea of punctuated equilibrium and he's right. Much like Steven Johnson's recent book Where Good Ideas Come From which would serve as a nice companion, Disrupt observes that innovation continues at a gradual pace and builds upon the work of others, but once sufficient structures are in place (often from other fields) to enable innovation, change happens disruptively and is virtually assured. 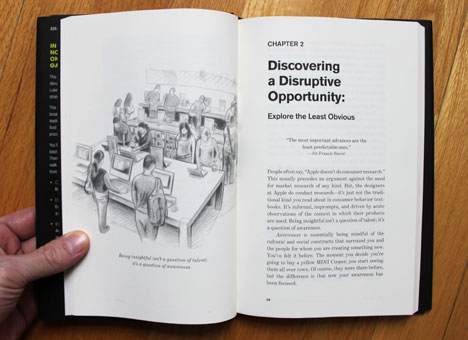 Like most other business books on the shelf, Williams uses examples drawn from today's business world along with his experiences consulting at frog. Usually after an assortment of anecdotes the reader is left with a set of scattered conclusions and no easy means for putting those conclusions into use. In Disrupt, Williams not only connects his mode of thinking to entrepreneurs who have successfully turned disruptive ideas into profitable businesses, but he also leaves readers with future references and templates for executing his methods. If Disrupt represents a disruption to the way of doing business, it does so not by aggressively changing the nature of a business book, but instead by clearly enumerating the tools that entrepreneurs need to craft their own disruptive hypothesis. Clayton Christensen first coined the term "disruptive technology" in his classic The Innovators' Dilemma and then built a lengthy career elaborating the concept at Harvard Business School, among others. It is best encapsulated by the classic Henry Ford quip, "If I'd asked the public what they wanted they would have said a faster horse." The public rarely questions the status quo, but if a company wants to succeed wildly, it must. Not questioning the current way of doing things is the fastest route to cultural irrelevance. Williams frames Christiansen's advice as thinking the unthinkable, and then walks the entrepreneur from an apparently absurd question, "what would happen if..." all of the way to a viable business.

Disrupt is unquestionably not about brainstrorming. As Williams himself puts it, "most idea-generation methods focus on quantity not quality." What's needed after idea generation is a process to winnow the bloom of ideas down into a useful conclusion. Our time reading innovation books at Core77 has led us to the same conclusion: Traditional brainstorming and many business books completely neglect to explain what to do with the ideas they generate. 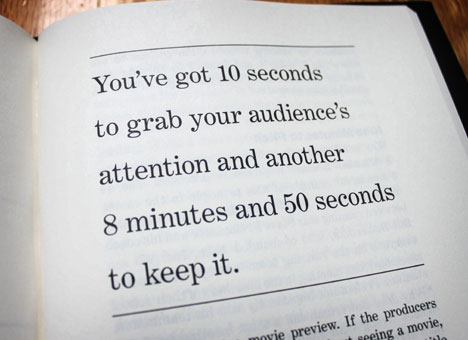 In his explanations, Williams follows the methods he suggests by accompanying his text with pencil illustrations of a variety of ideas ("sticky notes") all the way down to the final clean visuals of the product. He breaks the innovation process into several components organized my chapter (1) Craft a disruptive hypothesis like, "what if...," (2) Discover the opportunity, (3) Generate a disruptive idea by letting your mind run free, (4) Shape a solution to the problem by narrowing your ideas, and finally (5) Write the story required to make a disruptive pitch. 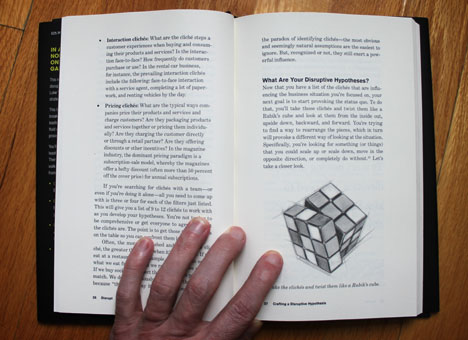 Williams uses storytelling to explain the narrative to those who have not yet reached the disruptive hypothesis on their own: "A [label] that allows [users] to [benefit] by [method]" and then he explains how to make a disruptive pitch (for money, press or simply to convey an idea). He instructs his readership on how to craft a perfect presentation section by section with slides to illustrate the story behind their ideas. Especially with disruptive innovations, storytelling is essential and as Williams illustrates, quite teachable. And then, at the end, he finally disrupts the traditional business book narrative by leaving nearly a quarter of the book to extensive bulletized end notes that encapsulate the heart of each of his methodologies. While we have not followed his advice (yet) on starting a disruptive business, we imagine that someone somewhere will craft a disruptive hypothesis because of them.