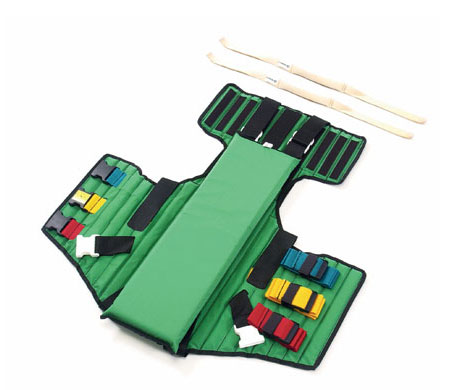 Back in my ambulance days, the first time I'd seen a KED (Kendrick Extrication Device, pictured above) outside of training was when a tractor trailer had gone off the road and crashed into a barrier. The KED is basically an airplane-shaped piece of fabric lined with splints. The EMT clambered up to the cabin of the truck, strapped the KED around the driver like a vest, and we extricated him from the cabin. The idea behind the KED is that after suffering a violent trauma, the patient's torso is essentially a bag full of broken bones, and you don't want bone shards cutting into their organs. You strap a KED around them to minimize any internal jostling while you're extricating them from a tricky space like the cabin of a vehicle.

Keeping an accident victim as immobile as possible during transport is a twofold design problem. First you need a stiffening device to serve as an exoskeleton for the patient, and secondly you need to design a way to move everything (which the KED doesn't have, being limited in its application). A gurney has wheels and can be moved by a single orderly: A stretcher has handles on either side and can be carried by two people. A newer device that we didn't have when I was driving the ambulance is something called the Paraslyde, a combination sled/stretcher made from corrugated sheets of plastic 8mm thick. 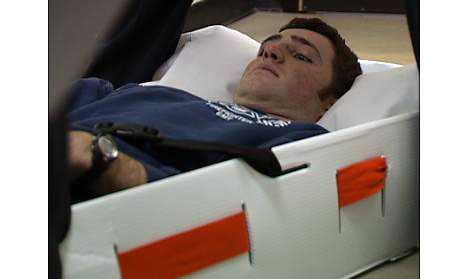 Like the KED, the Paraslyde is limited in its application. It's designed to be purchased in large numbers and used for mass evacuations where you've got a lot of people to evacuate and not so many people to carry them out. The Paraslyde is relatively lightweight and stores flat, and when it comes time to use the thing, a series of straps and the corrugations in the plastic give it the structure needed to keep the patient's body rigid. In a pinch a single person can drag the thing across a floor—not ideal, but conditions in emergencies so rarely are—and it's also designed to be slid (carefully!) down a stairwell.