Festival of Ideas for the New City: The Networked City 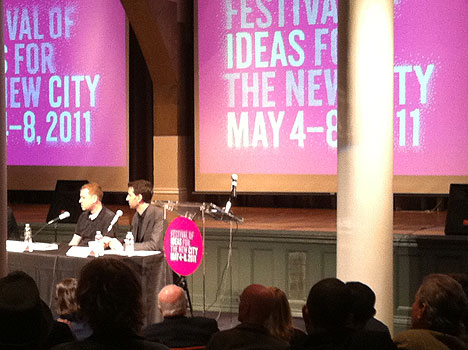 QR codes, the little black and white squares that embed links to digital information, are fast becoming part of the advertising landscape.

In France, the company QuiVidi, an audience measurement company, uses computer vision technology and marketing specialists to run profiles that captures information about the race, age, and gender of a people and length of time spent viewing digitally embedded advertisements in public spaces.

People willingly disclose checking into a public venues in exchange for loyalty discounts a la Foursquare or Facebook.

Welcome to the rise of the networked city: cities that, for better or worse, are going to document, survey, continuously count and extrapolate data accumulated by human behavior in urban environments.

There was a divide between the panel discussants: between those who championed a more decentralized understanding of existing networks and those who were interested in a more centralized understanding existing networks. As Jeremijenko, whose project The Environment Health Clinic leverages a decentralized approach to networks, suggests: "There [always seems to be] a gap between what one knows and what needs to be done."The gross commercialization and centralization of networks that move away from civic understanding of networks in cities was addressed in Adam Greenfield's presentation.

Greenfield brings up an interesting point regarding existing networks in cities, and the need for the citizen to become aware and more involved in the policies that shape the forms of these so-called public networks. Greenfield, the principle of UrbanScale, a company that aims to bring user experience design principles to solve design problems in urban environments, spoke about the need to think clearly about the morality of the object in the urban space, and the need for a theory of jurisprudence to help us better guide us in "the use of power and knowledge that resides in discrete objects".

But perhaps its a little ironic that after this talk, I realized that I couldn't even find an accessible public network to connect my laptop to, except through my mobile carrier which I pay for monthly access for.

The digital divide—in all its guises—presses on in the Networked City.

Festival of Ideas for the New City: The Networked City