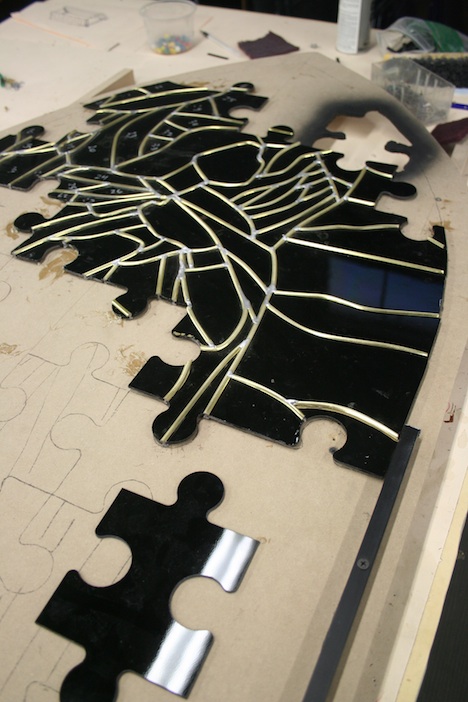 Brad Ascalon met Tobias Wong through the New York design scene in the early aughts. "I met him at the Haute Green show but I already knew his work and was mesmerized by what he did and how he went about doing it," Ascalon explains. Fast-forward a couple of years and the group with no name began meeting; an informal gathering of nine New York City-based designers to share ideas and maybe a couple of drinks. Tobias Wong was part of this group and although they had attempted a previous group exhibition, BrokenOff BrokenOff will be their first group project—a tribute to their beloved friend and colleague.

Core77: For the show all of you are taking one of Tobias' pieces and using it as a starting point and an inspiration for your own work. Why did you choose the "Mirror Puzzle?"

Brad Ascalon: What speaks to me about that piece is that it reflects the environment. It is not a static image. It is not something that you create, you put aside, and that's the end of it. To me, it's this notion that physical representation is only part of something, of an idea. The fact that there is no static image but a changing image solidifies that idea. It is never final. 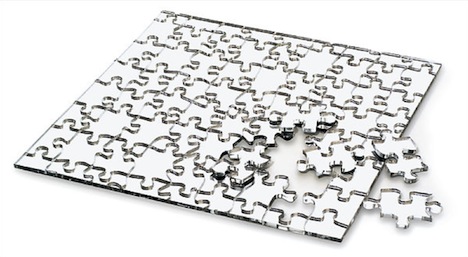 Thinking about Tobi and that piece: the legacy that he left in design will be echoed for a long time. We see it in young designers today, particularly here in the United States. The show itself signifies the impact that he has had on so many designers. In my piece I acknowledged the fact that he is no longer with us, physically, but the influence and impact he has had is going to be all around that room, in New York, in Brooklyn. It is felt.

The basic idea [for the piece] is referencing Tobi's ["Mirror Puzzle"] and doing so in this way where the jigsaw pieces start to cover up something—this angel. And Tobi loved riffing off of other designers and making it his own. So, in that spirit the angel that you see behind the jigsaw pieces is actually taken from what is believed to be a late 19th century Louis Comfort Tiffany stain-glass window.

The jigsaw pieces are treated like mosaic tile but they are all water-jet cut black opaque glass. The angel is treated in traditional stain-glass fashion. Using brass cane is a nod to Tobi's infatuation with gold-plating. The one piece that is missing is what continues on; it is that side of Tobi that will continue to inspire, continue to shine a light on not only the room but the people in it. 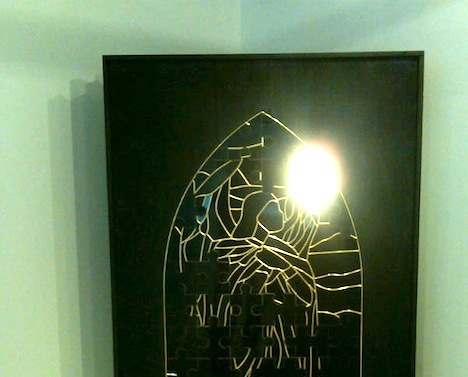 The piece is going to be created in a very standardized wood crate construction light box painted black, like a very standard shipping crate—that is what the light box is going to be made from. That is a nod to the idea that Tobi was really good at creating this dialogue between the high-end and the exquisite, the street and the lower-end.

Can you tell us a little bit more about the space this piece was constructed in?

This piece was constructed at my father's art studio. He has a 5,000 square foot studio and production facility outside of Philadelphia, and the studio is 30-something years old. He has been doing this his whole life. He specialized primarily in stain-glass windows, mosaics, metal sculpture. And so I grew up in this environment. After school, in high school, I would come there and that was my after-school job. 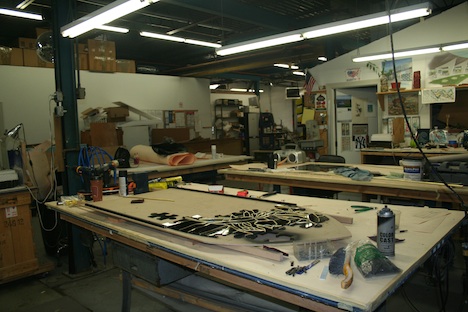 And I learned stained-glass and mosaic, I learned all of these processes, welding, etc. from a very early age. He has an old-school kind of mentality when it comes to production and the possibilities of the crafts themselves. What I like to do is push a little bit. Doing what [my father] does, but in a more progressive fashion. This mixture of mosaic and stained-glass, the fact that it is all black glass, is something that he didn't believe could possibly work. He thought, "You are never going to see the image." The old-school mentality. And I just kept saying, "Wait, wait, wait and see." And finally when we finished it, I proved him wrong. It is really important to me to continue, at least with some aspects of my work, continue that lineage that he, and his father before him, were part of. And just take it into a new light, a new format and a new style. 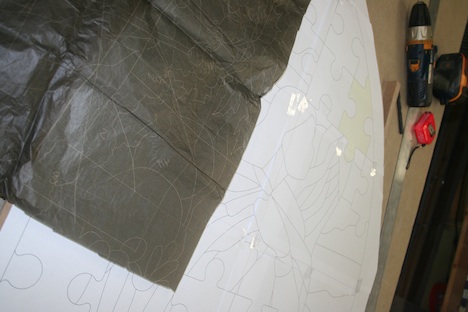 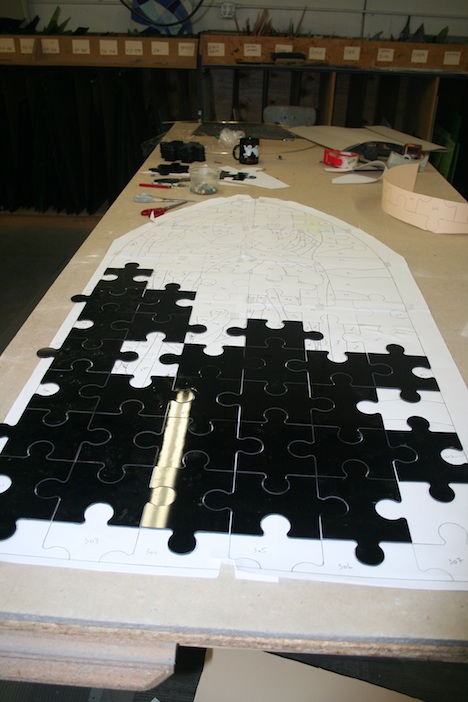 Using traditional methods, the piece is printed full-scale. Carbon paper is used to retrace lines onto oak tag paper. The oak tag sheets, in turn, are used to cut the glass to size. 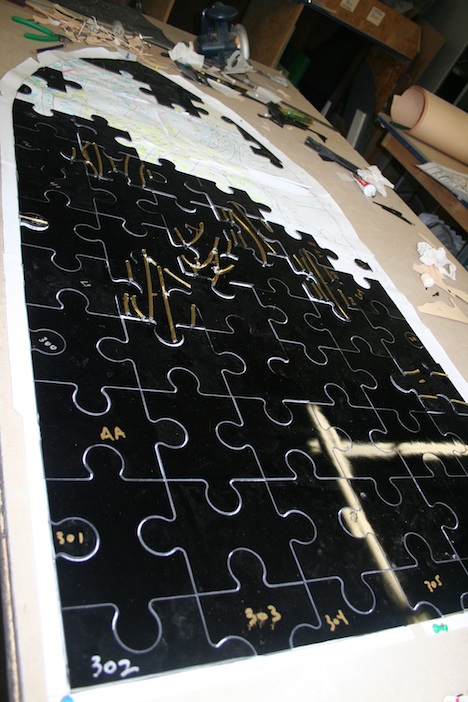 Brass lead. The visual illusion is that these jigsaw pieces are covering up the angel and only in certain spots is the angel revealed. 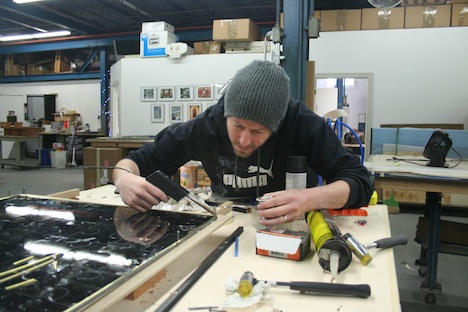 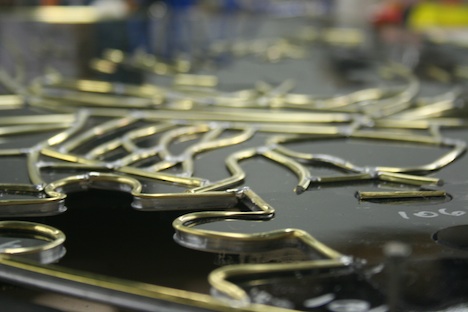 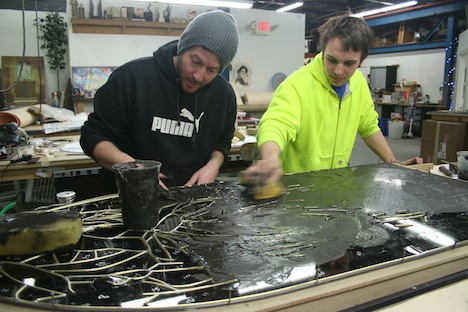 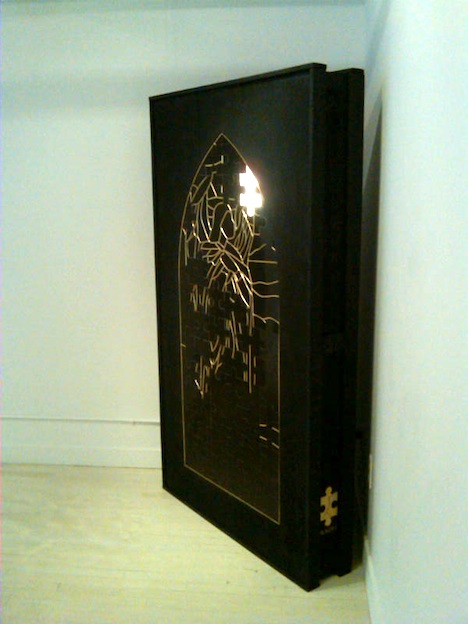 » Marc Thorpe, "Call Me or Copy Me"
» David Weeks, "There is Something About Giving Into Your Desires"
» Josee Lepage, "Times of New York"
» Frederick McSwain, "Die"