BrokenOff BrokenOff: David Weeks, "There is Something About Giving Into Your Desires" 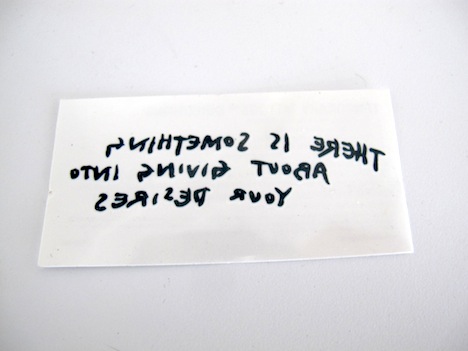 As designers working in New York City, David Weeks and Tobias Wong had met on and off through industry gatherings like the International Contemporary Furniture Fair (ICFF) and local New York exhibitions and events. In preparation for this week's opening of BrokenOff BrokenOff, Weeks shares memories of his first encounter with Wong over a vodka cocktail and the myth behind the inspiration for his tribute piece, "There is Something About Giving Into Your Desires."

David Weeks: When I would first read about [Tobias Wong], they'd write about him like "the bad boy" or some sort of enfant terrible. And then once you've met him you're like, "oh, he's just a really smart, funny guy." Although we had met on and off at the ICFF and other things, my first real memory of him was when he did [Wrong Store, 2007] that storefront that wasn't really a storefront. Then he had a little vodka dispenser on his belt and he's squirting these funny cocktails. I think that was one of the first times I put it all together. And I loved it. It's like he's thumbing his finger at the industry, which is so rare, and frankly, I don't know anybody else that does it. He'll be missed for that for sure, but I think that was the first time I put him, his work, on the level of sense of humor and charm. 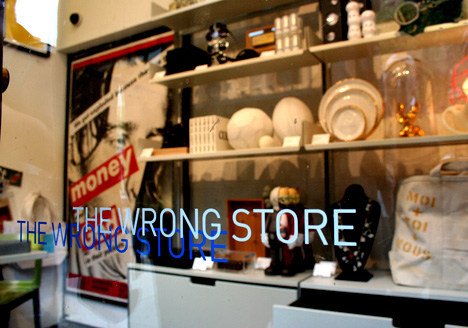 I think we had the same sense of humor on a lot of the different things—not taking this whole thing that seriously. [Tobias] did such a good job at meshing art and New York-style sarcasm and satire into his work. But then, [objects] like the Kevlar rose [Ballistic Rose, 2008] is so elegant. That piece was so perfect; it had the humor. It had everything. When he hit his mark, he was dead on. It was such a nice thing. He's fantastic and almost a sole voice for the design industry here in the US.

And then eventually we were both part of the group Marc Thorpe organized. I had the opportunity to finally get to know him somewhat over the last year, which was such a treat, an unexpected bonus. Tobi on the last meeting, he was totally running that meeting, He was like Truman Capote with these big glasses on—and hardcore, like really belligerent, but in a really funny way. 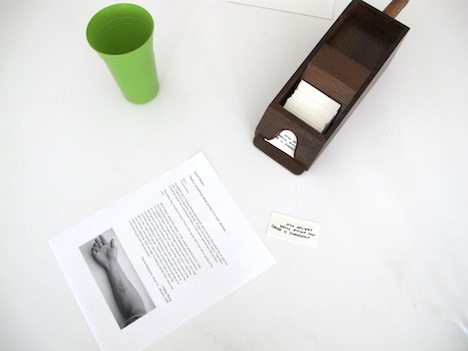 Core77: Can you tell me a little bit about your process for choosing a piece of Tobias' to start off with for the show?

The tattoo that Jenny Holzer wrote on his arm; I thought it was just such a compelling story. And just everything about it: "Wait, he had the wherewithal to have a pen on him?" or think, "Oh, can I get an autograph?" To ask, "Could you write something on my arm?" and to pick the spot for it perfectly right there in the middle of his forearm, to make it permanent to top it off and then have it be such a great quote. Was Jenny Holzer so on that day that she just had that [phrase] right in her back pocket? And he was just so on that he knew exactly where to put it and keep it. So, that's the thing I was compelled by. It just led to such a visceral kind of statement, and it's that nice thing between design and art. Jenny Holzer's comment is all about desire and consumerism.Then the effort was to find a quote that would compliment [Holzer's] quote and make it a temporary tattoo so everyone could have that same sort of experience as they left the opening. I found a quote from [Tobias] in Theme Magazine which was about the iPhone. It's so funny because it's about him standing in line and kind of resenting the fact that he was in line in the first place, but then giving into his own desires. Which goes back to the Jenny Holzer thing, PROTECT ME FROM WHAT I WANT. So, it's kind of a nice answer to the same question. 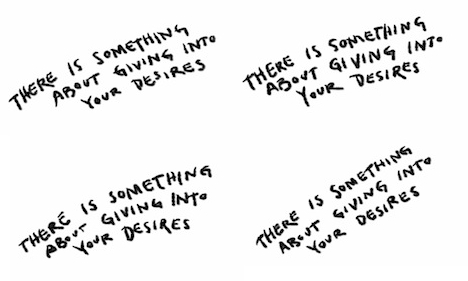 This is called a Dealer Shoe, but I like the fact that it's based on gambling. I basically just wrote it over and over and over again until I felt like it was close enough to Jenny Holzer's handwriting. I so appreciated the immediacy of his idea from his point of view in the first place.

Do you think that he had that planned?

I don't know. No one's ever confirmed that or denied that. I never got an explanation from him. A friend said he totally knew what he was doing. He knew she'd be there. He asked her to write that. I mean, I don't know if any of the thing is true or...

It's all part of the mythology.

There's this thing that says, "As legend has it," because in my mind it was just this great moment where he just walked in, she knew something, she sized him up and wrote exactly the perfect thing for his forearm.

BrokenOff BrokenOff: David Weeks, "There is Something About Giving Into Your Desires"