Bamboo bikes have apparently been documented as early as 1894, but there seems to be a recent surge of interest in the concept, which takes the sustainable appeal of cycling to the next level. The Bamboo Bike Studio (BBS) was founded by Marty Odlin, Justin Aguinaldo, and Sean Murray in 2008. Located in Brooklyn, NY, the BBS teaches workshops on bamboo bike building. We had a chance to talk to them about where they come from and where they're headed.

Core77: What exactly is the Bamboo Bike Studio?

Marty Odlin: The Bamboo Bike Studio is a collaborative workshop for bicycle design and bicycle making. We have shops in Brooklyn and San Francisco, we are opening in Toronto this summer, and have launched a build-at-home or build-at-school kit. It is built around the idea of giving access to the bike making to as many people as possible. We are a social venture, and have set up the world's first mass production bamboo bicycle factory to provide low-cost bicycles to local markets in Kumasi, Ghana. We have also taught dozens of high school students how to build a frame from scratch. 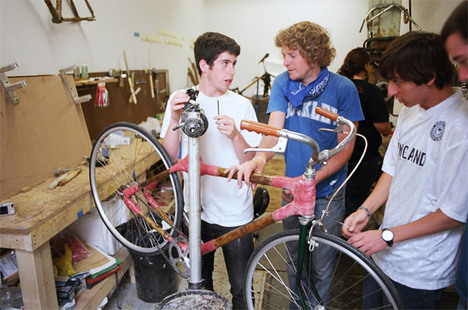 Where did the concept come from?

The concept for the Bamboo Bike Studio grew directly out of my experiences as a product designer at K2 Sports. I had an incredible experience getting products made, pulling together a diverse supply chain, traveling around China and Korea, seeing the factory floors. When it came time to ship the products back to the States, we stuffed everything in cardboard boxes and containers and just stripped all this value, all the stories and experiences of the makers, out of the product. On the other side of the ocean, the marketing group had to work doubly hard to try to put value back in. It just seemed like a system that left a lot of value for the customer on the table.

At the same time, I was looking to get back into fabrication (I am a lifelong maker and fixer). I had a really bad experience at a bike shop with the typical bike snob, and it seemed so silly to me that someone could make me feel so terrible when I could make all the stuff that they were selling. So as a personal F-you to this guy, I decided to build my own bike. I needed to prototype and bamboo seemed like a cheap way to iterate. After my first bike, a good friend of mine asked if I could show him how to make one... and Bamboo Bike Studio was born. 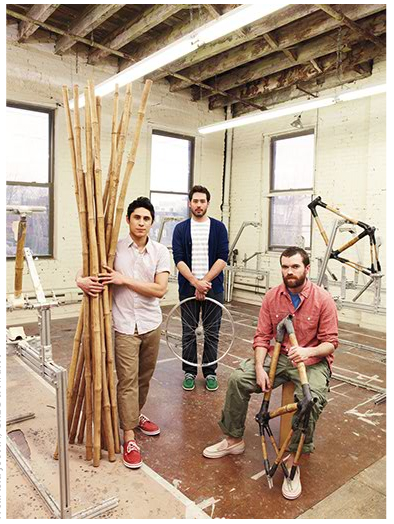 Bamboo as a sustainable material is the butt of many design jokes—why is bamboo the actual best solution for sustainable bicycles?

Bamboo, as a material, is great for bikes. It is strong, lightweight and dampens far more vibration than steel or carbon. It is simply more comfortable. It is also easier to work with, so it facilitates people building their first bike in a weekend—which is not possible with steel.

Developed countries have enough stuff. Giving people more stuff, even more "sustainable stuff" doesn't make anyone happier. The idea of the designer as driver of consumption is a tired and corrosive idea. We need to evolve past that into facilitating meaningful experiences. If you build a bike, you feel differently about yourself and your bike. It is a totally different thing than replacing a material here or there with something "less bad." Our mission is to make producers out of all. We want to give greater access to the experience of designing and making. 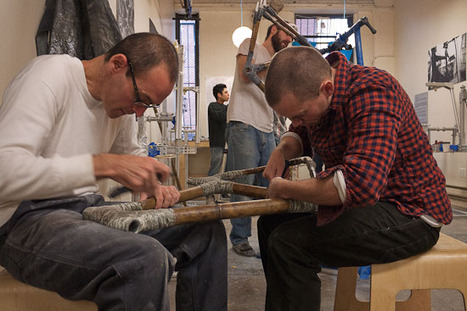 How do your workshop studios operate? What kind of audience are you seeing?

The workshops start with people sending us their measurements. We help them to design their bikes over phone and email (or in person if they are local) prior to the start of the workshop. We get all the materials together through our suppliers. People are able to walk right in and get to work. The workshop moves rather quickly. Between 16 and 24 hours of work later, people are riding out on their bike. It's a whirlwind experience, totally exhausting, but really rewarding. Workshop participants become our friends and we still keep in touch with many of them. We've had high school students, 75 year-old ladies, roofers, loggers, Navy lieutenants, Iraq War veterans, Bankers, Yoga instructors, organic chefs, and more. 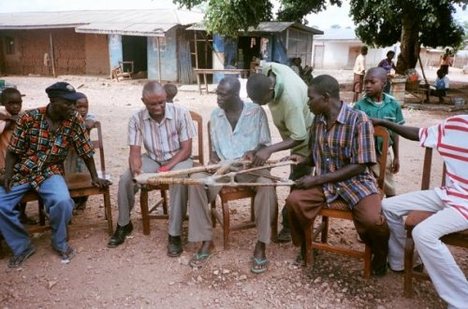 What was the process for opening your factory in Ghana? What kind of partnership would you like to see in the long run? Plans for expansion?

The Ghana project was an unbelievably drawn out process. We learned a lot, struggled a bit, and eventually succeeded.

The goal was a cheaper bike than Chinese imports, so we were hoping to get around $55/bike (we ended up at $70). It was literally thousands of hours of logistics and sourcing to even make sure it was possible. Then we had to make bikes that could hold up to the rigors of our target market and build them fast enough to reach our economies of scale.

I started working as a volunteer in 2007. The development of the technology really kicked into gear once I met Sean Murray and Justin Aguinaldo, as we just started cranking out bike after bike after bike, learning by doing and improvement. I think we've made over 100 test bikes, trying out a new trick or two on each one.

We built and rebuilt dozens of special tools to make the job quicker and easier.

Then it was a matter of securing the money, working with investors and local partners, building the factory in Brooklyn, packing it into a container, getting it through customs, building the factory again in Ghana, training the workers, and on and on. It was the most difficult thing I've ever been involved with, but really rewarding to see the potential of this technology start to be realized on such a scale.

We'll definitely be opening more factories. We have a few irons in the fire, and are always on the lookout for good partners. 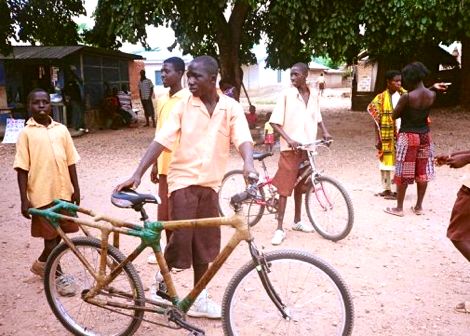 How can someone get involved in the project?

Every employee and member of our team starts as a volunteer, working off their first frame with 80 hours of work. Once they've built a bike or two, they can move on to jobs unrelated to bike making. If people prove themselves committed and talented, we do everything we can to find them a role in the organization. There is no application process, just trial by fire (or sweeping floors and cleaning jigs).

Building something useful is a very human thing to do. It feels good.