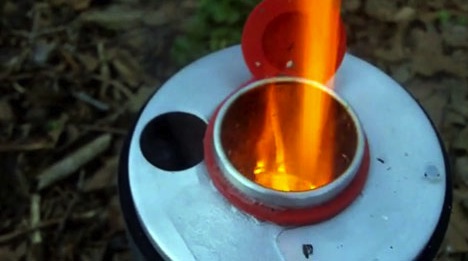 Yesterday's post on Devin Montgomery's (successfully*) Kickstarted Backcountry Boiler, and its seeming similarity to other chimney kettles, has kicked up the veritable shitstorm of comments, e-mails and debate on the nature of product evolution versus copying. Montgomery himself took severe issue with our wording, pointing out that our implication was that Kelly Kettles owns the chimney kettle idea (they do not) and that we accused him of unethical behavior, which he cheerfully debunked. Our apologies!

To set the record straight, Montgomery took the time to write in to Core77 and specifically describe what places his project in the evolutionary category:

[Yesterday's post] suggests that the Backcountry Boiler is a modified Kelly Kettle, or worse a "copy," and it simply is not. It is the state-of-the-art chimney kettle, an entire class of products of which the Kelly Kettle is only one (albeit the best marketed one).

Montgomery goes on to list a host of other chimney-kettle-producing companies, then gets down to the nitty gritty: What, exactly, his design brings to the table.

What I did was create the first chimney kettle that one could practically carry around with them, and you can ask anyone who has used both the one of the first batch of the Backcountry Boilers and any other chimney kettle how immense the difference is. This improvement didn't happen by accident. It happened by a lot of thoughtful design.

The story of the Backcountry Boiler isn't one of the similarities it has to one brand of what had become essentially a commoditized product. It is about how a graduate student, working in his spare time, learned the fundamentals of both industrial design and a metal-working process called metal spinning to revolutionize a category of product that had been stalled for decades, making something that was not only marginally better than its predecessors, but such a leap forward that it opened it up to a whole new range of uses.

I encourage...further research [on] the history of the chimney kettle, and even better, to read my blog [which details] how I developed the Backcountry Boiler after the first prototype. If you do that, I think you will find that rather than "raising thorny questions" about what can be done on Kickstarter, it exemplifies the very best of what it can do.