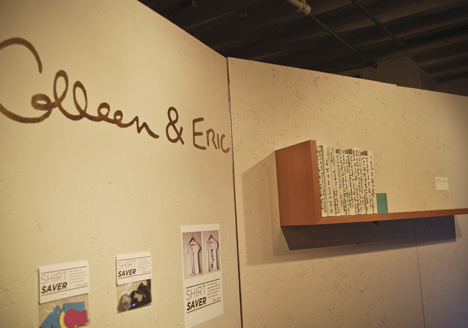 At Wanted Design last weekend, Brooklyn-based design duo Colleen&Eric debuted a few of their new pieces. Both industrial design graduates of Pratt Institute, Colleen and Eric work out of their studio in Bushwick, and showcased their work at ICFF for the first time last year. The "Hold on Tight" bookshelf was a hit, which used an aluminum cube and wingnut as a sliding bookend, as were the "Shirt Savers," little design-y appliques to rescue your shirt from indelible stains. 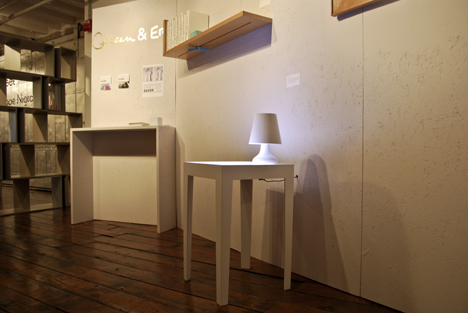 The "Opposite Day Table" had a clever element of interaction—the table acts as the producer of light, while the lamp itself becomes the light switch. By rotating the lamp, one can control the dimming of the table. When we asked the designers about the construction of the piece, Eric mentioned their use of Medex, a material similar to MDF but isn't water-soluble. He even took the time to explain by drawing a sketch in my notebook, shown below. It's so great when design fairs serve as a venue for getting to know and understand designers, as opposed to lines and lines of inaccessibly slick booths for us to stand and merely gawk at.