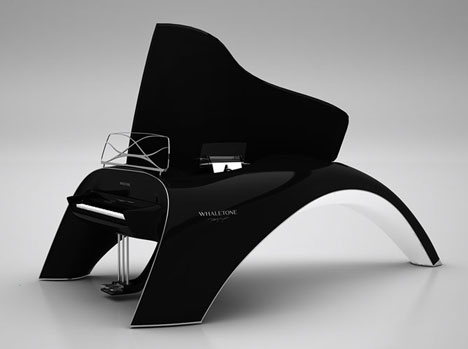 Redesigning a grand piano is pretty ballsy. The form factor and overall lines are pretty firmly entrenched, and the types of people who'll pony up for one aren't known for their embrace of radical redesigns. Then there's the challenge of trying to break the lines already seared in your head from viewing an object with such an established form. 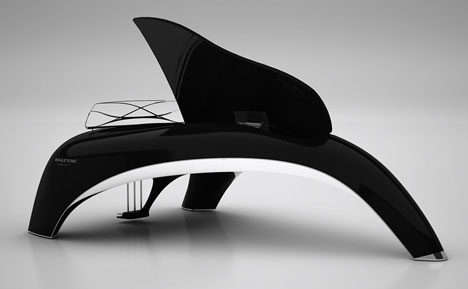 Still, I do believe Polish designer Robert Majkut has pulled it off with his Whaletone Piano. Using the unlikely inspiration of an imprecise dream he had after a daytime whale viewing, Majkut set to work:I realized how little had changed in this instrument over so many years. Intrigued with this discovery, I began to chase the dim picture trapped in my memory [of the dream]. At first, my mind lead me astray, struggling with habits, experience, intuition and beliefs. It took me a long time to sketch the form, which came across as something vaguely imitating the vision concealed in my mind. And then, one day, while working on this concept already a bit obsessively, my mind unlocked and my hand drew the piano from my dream. I immediately recognized it. I instantly knew I got it.

Monumental—like a whale emerging from the water, slow—like the movement of a giant. Charming, majestic, delicate and melodious, like romantic calls of coquetting whales...

I knew it called for being made.

From that moment on, I have known that in the depths of our minds there are ready-made, complete, good ideas. Concepts, forms, choices that are beyond our comprehension until we release them. This is one of them—Whaletone—my version of a singing whale.