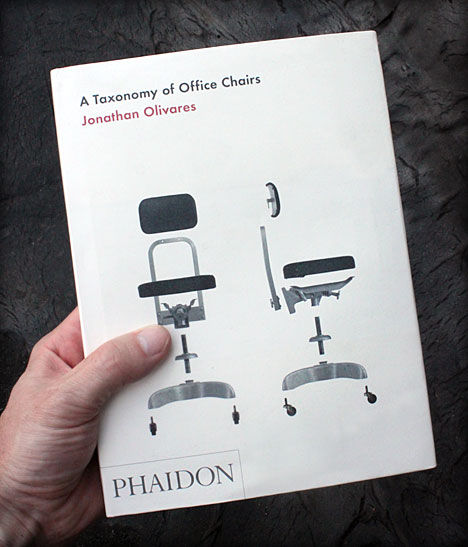 Our first introduction to the taxonomy of chairs by Jonathan Olivares was at the Phaidon Store on Wooster where a meticulously deconstructed chair hangs suspended in an exploded view of it's requisite parts in the window. The armrest, the back, the seat and the base all float away from the chair in a deconstruction of a chair, an appropriate metaphor for Olivares's Taxonomy.

In the introduction, he explains that natural objects have been the subject of taxonomy since man first tried to understand his environment. An early page shows the morphology of the leaves from Carolus Linnaeus' Hortus Cliffortianus, or if you're a baller, the real book and after a quote from Baudrillard's The System of Objects, Olivares goes on to explain that, "As far as [he] knows, this book is the first taxonomy of an industrialized object." It could have been the taxonomy of toasters or automotive engines, but office chairs seemed an ideal subject because of their close relationship with the human body and their mechanical complexity. Wow!

While car aficionados, trainspotters or objectophiles in general tend to have a highly detailed and hugely comprehensive mental library of specialty-related ephemeral otaku-like traits, that knowledge is rarely categorical. That is to say that while they might be able to distinguish a Corvette from a Corvair and explain the historical relevance of each, no one as of yet has ever tracked the "evolution" of a thing and categorized it based upon the classification on novel traits alone. For that reason alone, the Taxonomy of Office Chairs is a milestone of wonderment to us, precisely because a non-designer would likely find it soporific, just as I would upon hear someone rattle off baseball batting averages. 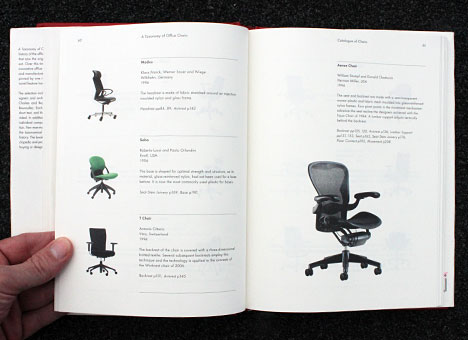 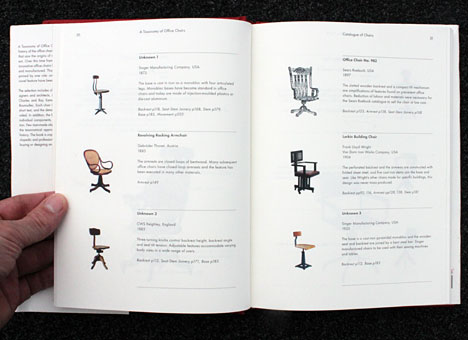 The book opens with an introduction explaining how Knoll sponsored of the project, though not with any particular bias upon the chairs they chose that we could discern. A team examined every detail of every chair produced on a large scale and then took only those which included one or more novel features. That culled set of chairs is presented along with full-color photographs in chronological order. Each picture includes a brief description, along with references to the novel features it embodies and page references to the detailed feature set section, which comprises the bulk of the book. After the splash photos, Chairs goes full on dork out. Sections like "armrests" show a series of line renderings detailing every variation of armrest height, attachment and articulation. For the base, this reviewer was surprised by the robust history of spring bases that bent out like baskets. 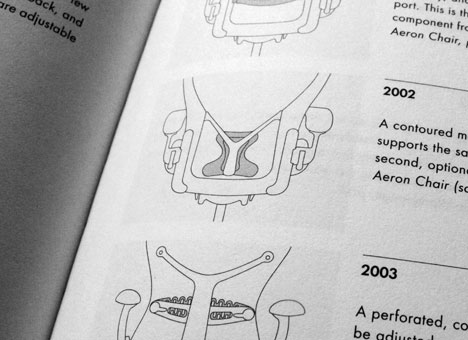 Most readers in design offices will have the benefit or the voyeurism of looking at the chair they're actually sitting in at the time and finding it in those pages. In my case it was the Mirra Chair (first perforated back designed to flex differently in different places); in your chair, perhaps something else. Chairs is clearly a watershed book. This reviewer also enjoyed the history, but desperately wanted to see genealogical diagrams, or to have hypertext links from one page to the next simply because the magnitude and complexity of the questions the dataset generated. 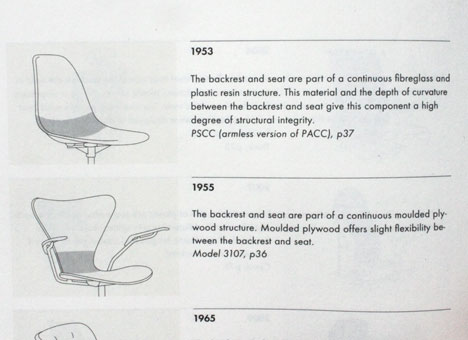 We have no doubt that this book will be an encyclopedic point of reference in every design office, and that similar undertakings might be of interest to designers of varied other projects. For design and architecture firms, this book is invaluable. As an individual making a single choice about seating, this computer-bound reviewer might suggest discarding the office chair in favor of the rolling exercise ball I occasionally sit upon to avoid repetitive strain. Interestingly after all of the history of seating presented, it concludes with anti-chairs that allow mobility like the work of Peter Opsvik (Capisco, page 52), with his history previously reviewed here. Take it one step further...and perhaps chairs should be discarded entirely in favor of work centered around heightened desks.