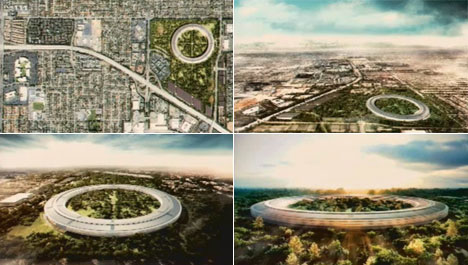 One of the things that fascinates me about Apple is that you can see them learning, see them building on what has come before. Watching the WWDC keynote, I was struck by how similar the swiping of screens in the new OS looks to swiping screens on an iPhone or iPad. The interface language on these previously ancillary devices have come to inform the operating systems of the main desktop machines.

The same sense of building on what's been recently learned is also apparent in the design of their new headquarters in Cupertino. With 12,000 people to house, the typical move would be to build a corporate park with a number of discrete buildings, but instead they've chosen to build one huge building shaped like a circle. If you're an architect, a red flag just went up, as you know that a flat piece of glass on a straight building is one thing and a curved piece of glass on a round building is a different animal entirely. "There's not a flat piece of glass in this building," Jobs states, before going on to add that they've learned how to "do" large sheets of curved glass through designing various Apple Stores around the world.

Jobs presented his plans for the new Apple HQ to the Cupertino City Council, and the full video of it is below. At 20 minutes it's not a quick watch but it's interesting, and the bulk of the presentation is from roughly 4:00 to 11:00.

Two more things we found interesting about the plans:

1) The current plot of land, purchased from HP, is about 20% landscaping, with the rest taken up partially by buildings and mostly by huge parking lots. Apple's plan is to transform the lot into 80% landscaping, by moving all parking underground.

2) Rather than operating off of the power grid and installing back-up generators, Apple is going to build their own powerplant, possibly fueled by natural gas or something green, and they will use the power grid as a back-up.

Lastly, by watching the City Council video I realized that Jobs practically teased the new HQ by mentioning, during the WWDC presentation, that the event had quickly sold out at 5,200 tickets. "This is the biggest place we can get," he said of the Moscone Center. "We wish we could sell more tickets, but we don't know where to have [this event] if we do." Well, now they do: Apple's new HQ will have its own enormous auditorium for presentations, obviating the need to travel to San Francisco and hold events off-site.