"Blaze," a bicycle light concept by Emily Brooke, a product design student at the University of Brighton, has been getting some buzz in the cyclo-sphere lately. The handlebar-mounted laser projects a bright green virtual bike lane in front of a cyclist in order to increase visibility, especially in automobile blind spots. 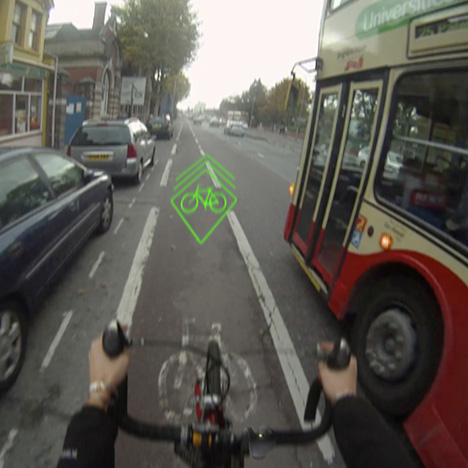 As of press time, this is the only image available. It illustrates the concept but leaves a lot to be desired...

Brooke explains her thought process:I wanted to tackle the issue of safety of cyclists on city streets by increasing the visibility, footprint, and ultimately the awareness of the bicycle. Eighty per cent of cycle accidents occur when bicycles travel straight ahead and a vehicle manoeuvres into them. The most common contributory factor is 'failed to look properly' on the part of a vehicle driver. The evidence shows the bike simply is not seen on city streets.

Even when lit up like a Christmas tree a bicycle in a bus's blind-spot is still invisible. With BLAZE, you see the bike before the cyclist and I believe this could really make a difference in the key scenarios threatening cyclists' lives on the roads. 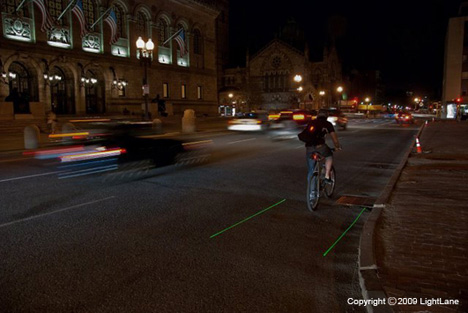 Many of the articles refer to Evan Gant and Alex Tee's "LightLane" concept (above), which projects a lane behind and to the sides of a cyclist (as opposed to in front of him or her). We got a first look at it when Gant and Tee entered it in a commuter cycling competition nearly two and a half years ago.

For her part, Brooke's concept has earned her a place in an Entrepreneurship Program at Babson College in Massachusetts. While "LightLane" hasn't made it out of the prototype phase, hopefully "Blaze" will move forward with the vigor that its name suggests. Of course, if it were up to me, the three of them would team up with Ethan Frier and Jonathan Ota of "Project Aura" to create the safest, most visible bike ever. 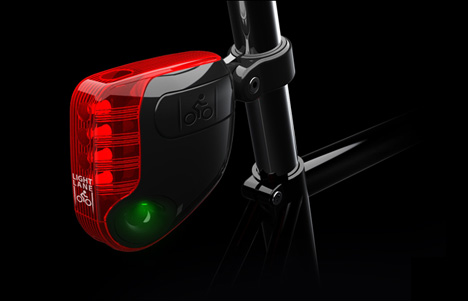 Still, in a case of what is surely more than mere coincidence, I also happened to see Gant and Tee's "LightLane" concept at the Art Institute of Chicago this weekend. I'd rather see it in situ, on the streets, but at least it's getting exposure, and it's interesting to compare each designers' disparate approaches to the issue.

While "Emily worked with road safety experts, Brighton & Hove City Council, the Brighton & Hove Bus Company and driving psychologists in developing BLAZE, an idea that has won her international recognition," Gant and Tee conducted their research independently. According to the Art Institute:A series of brainstorming sessions resulted in a range of ideas, some more guerilla-style such as attaching a can of spray paint to the side of a bicycle so that cyclists could paint their own lane as they rode along, while other ideas were more threatening, such as suspending a key from the side of the bike that would warn drivers not to get too close ("keying a car" being a common form of vandalism).

Meanwhile, Gant and Tee found that bike lanes "establish a well-defined boundary beyond the envelope of the bicycle, providing a greater margin of safety between the car and the cyclist." Since it costs $5,000 to $50,000 per mile to install bike lanes, there is an understandable disparity between the rise of cycling as a mode of transport and the existing infrastructure: "Instead of adapting cycling to established bike lanes, the bike lane should adapt to the cyclists."

Nevertheless, there's no guarantee that the bike lane represents the safest place for a cyclist to travel... which filmmaker Casey Neistat cheekily demonstrates in this semi-viral video from last week (a serendipitous response to the egregious violations in this video from just a few days prior, which I didn't have the heart to post).

While I do not condone the rampant salmoning (i.e. riding against traffic) in the "3-Way Street" video, Neistat's video demonstrates that the bike lane may not be the safest place to ride (let's not get too hung up on the fact that he's not wearing a helmet; that's entirely besides the point). In fact, New York law makes provisions for these instances:(1) Bicycle riders to use bicycle lanes. Whenever a usable path or lane for bicycles has been provided, bicycle riders shall use such path or lane only except under any of the following situations (bold text added): (i) When preparing for a turn at an intersection or into a private road or driveway. (ii) When reasonably necessary to avoid conditions (including but not limited to, fixed or moving objects, motor vehicles, bicycles, pedestrians, pushcarts, animals, surface hazards) that make it unsafe to continue within such bicycle path or lane.

I'll leave my own opinions out of the discussion, but readers are more than welcome to share their thoughts in the comments...