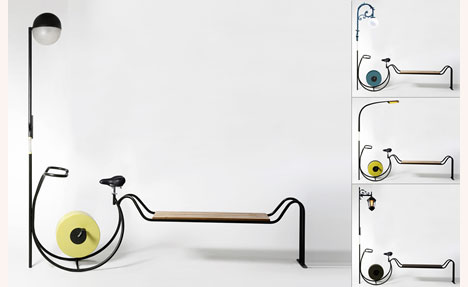 There was a recent preview of the year-end show put on by postgrad design students at Central Saint Martins in London, and Chiara Montgomerie from BD Online's "The Culture Blog" scored an invite. (If only I were London-based, invite or no I would've gladly pushed my way into that show and claimed to have been from a Core77 competitor if I got thrown out.)

Montgomerie wrote up her impressions of the show, and while several projects caught my eye, the standout was Bharat Bargava's public bench and lamppost, above, which relies on your lazy ass rather than the city to provide the juice. "The piece invites users to cycle for fitness," writes Montgomerie, "while being able to observe how their physical output can be transformed into electrical energy to power the street lamp."

I love the idea even though, sadly, I know no New Yorker who could be bothered to engage it. Our homeless prefer to sleep on benches in the dark, and I'm guessing the last thing a bike messenger taking a break will want to do is keep pedaling.

Those of you in London range can see the MA Industrial Design show from June 20th to the 23rd. The rest of you can read the full articleand see more projects here.