Well, almost: Lytro, a Silicon Valley startup, has been getting quite a bit of buzz for its new "light field" camera, which allows photographers to manipulate the focal length for any given image after the photo has been taken. While the technology has existed since the mid-90's, Dr. Ren Ng has taken his lauded dissertation research from the hallowed grounds of Stanford to nearby Mountain Valley, where he's managed to adapt the imaging technique—"light field" once meant some 100 cameras in a room— for consumer use under the Lytro moniker.

And what, exactly, is a "light field," anyway? The short description is that it captures every ray of light, deflecting off every object at every angle, in any given image. Where traditional camera lenses "simply add up all the light rays and record them as a single amount of light," the "light field sensor captures the color, intensity and vector direction of the rays of light."

The light field is a core concept in imaging science, representing fundamentally more powerful data than in regular photographs. The light field fully defines how a scene appears. It is the amount of light traveling in every direction through every point in space—it's all the light rays in a scene. Conventional cameras cannot record the light field. 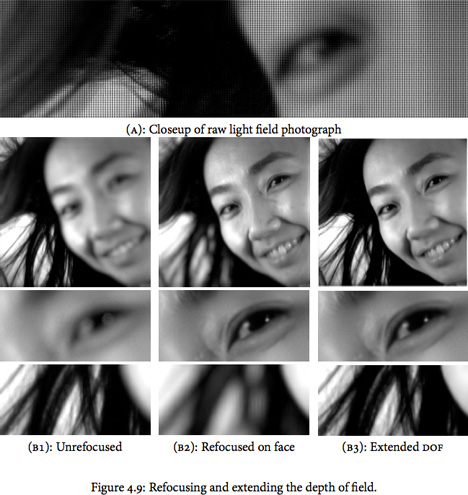 via Ng's dissertation (PDF)
Frankly, I'm not much of a photographer myself—though I do like to play around with manual focus from time to time—so I'm curious as to whether Lytro truly represents a step towards leveling the playing field for the art of photography: light field aside, one must still compose an image. Or is it the case that Lytro is introducing a much-needed element of composition to the point-and-shoot mentality that previously lacked this sense of refinement?
Michael Soo for Lytro

So is it a game-changer? We'll find out later this year, when Lytro releases more details about the what is already being hailed as the most significant advance in photography since the shift from film to digital (if not the 1800s). In the meantime—while Ng & co. put $50 million of fresh venture capital towards commercializing Lytro—check out some of the "living photographs" on their site (above and below):