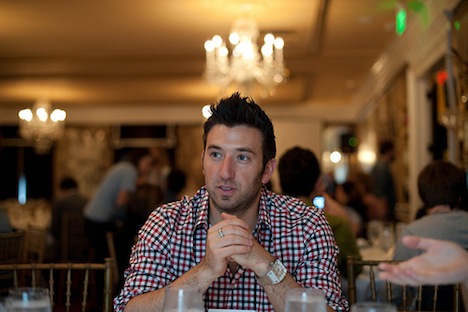 In anticipation of Device Design Day 2011, we've partnered with Kicker Studio to bring you a series where speakers from this year's conference reflect on six questions about design and their practice. D3 brings together visual, interaction and industrial designers for a multi-disciplinary conversation about the design of consumer electronics and objects with embedded technology.

This is our third installment of "Six Questions" with the speakers from this year's Device Design Day! We're excited to share some of Mike Kruzeniski's thoughts on being "just" a designer, the importance of storytelling and his love for the Nokia 3310.

Mike Kruzeniski is a Design Lead on the Windows Phone design studio in Redmond. Before joining Microsoft, Mike worked at the Design Strategic Projects studio at Nokia Design in Los Angeles. His focus has been on pushing the boundaries of mobile experience, exploring the language and cultural roles of user interface, and methods for taking product concepts to production.

Kicker Studio: What is the most cherished product in your life? Why?

Mike Kruzeniski: This is one of those questions that you feel like you're supposed to have an answer to, but nothing comes strongly to mind. Maybe I'm stuck on the word "cherished." I do have a lot of products that I really like. Some that I might even say I love, in that way the word love gets thrown around design. I love my Prius. I love watches, Alessi and Nixon in particular. I have a lot of shoes...but love my Converse All-Stars and John Fluevog's the most. I have a pair of classic Tom Ford sunglasses that I love. I love my Eames furniture. I have a large collection of mobile phones, and as far as products go, I spend more time with my phone and PC than anything (and maybe anyone) else. I just bought a new camera and so far that relationship is off to a very good start. But, I don't think of any of these things as "cherished." The emotional connection with them isn't strong enough to deserve that. Maybe that's being too literal with the question, but all of these things can be replaced. They will be replaced, eventually.

When I think about the objects in my life that I do actually feel a sense of "cherishing" for, there are two, but they aren't really products. The first is a painting that my wife and I bought together on our first vacation, in Bangkok. We met the artist and ended up drinking all night with him and his friends, despite neither us being able to speak Thai, or them English. The second is the ring that I proposed to my wife with, which I folded out of paper. Yes, paper. Both of these objects have great stories surrounding them and make me happy just thinking about them—and always will. Both are fragile, by their nature won't last, and are the only things in my apartment that I would actually feel a strong sense of loss for if they were damaged or lost. Both represent a lot more to me than just what they physically are. There is no newer or better version of those objects. And unlike a lot of other things their impermanence only increases their value, at least to me.

As a product designer though, that sort of sentimentalism and interest in stories often finds its way in to my approach toward design. I've always been interested in experiences where meaning unfolds, and products that aren't "done" but leave opportunities for a relationship and a story to take place. I'm still not sure it's something that can really be designed in, but it's worth trying.What's the one product you wished you designed?

The Nokia 3310 and Twitter. What I like about both of them is that they reduced emerging trends of their time (mobile communication and social networking) to an almost absolute clarity and simplicity.

Though the 3310 wasn't actually my first mobile phone, I tend to remember it that way. At least it was my first mobile phone that really felt right. Like all technologies in their early stages, mobile phones had mainly been comprised of complicated experiences and were sold on feature specs. But the 3310 was an impressively clear expression of what a mobile product should and could be. It was the kind of product that was so pleasant to use that you form some emotional attachment to it. It was one of the best selling phones ever, it was inexpensive, and was very early in the mobile market, so it was the first mobile phone for A LOT of people. I imagine that most of them probably look back on that product with a smile as well.

Similarly, Twitter took existing communication, interaction and networking concepts and reduced them to a very clear and simple experience. I respect their focus and how they've confidently avoided layering on extra features over the years. I really admire how they've grown around the the behaviors of their users but also elegantly guided users where they've evolved the experience. I love their approach to openness and how they've built Twitter to feel more like a platform than a product. I think that Twitter has become the most important evolution of communication since the mobile phone.

And their brand is just fun.

Both products are/were simple, focused, meaningful, have a sense of humor, well-made, beautifully designed and accessible. These are all attributes that admire and hope to bring to my own work.

What excites you about being a designer? Why do you keep doing it?

From the very beginning when I was just learning what design was, I've always liked the way design influenced my way of looking at and understanding the world. Once you learn it, you can't turn it off. Everything is at once a problem and an opportunity. I like the always optimistic mindset that design provides when approaching problems. I like the constant questioning and I like the attitude that most designers have of wanting to make everything around them better. I like the opportunities that design continues to bring: I feel like every project I find myself working on is more exciting than the last. As I grow, the opportunities for influence and impact in my work increases. And as a discipline, I feel like design is continually finding its way in to more interesting industries and settings. Our collective influence and impact is increasing. Of course design itself can't fix everything, but I do think that there is a role for designers in any of the hardest societal and industrial problems. The boundaries of what design is and does is always expanding. That's exciting.

When do you first remember thinking of yourself as a designer.

I took to the idea of being "a designer" very quickly in school. Design wasn't a profession that I had ever heard of growing up, but I went to Emily Carr University (an Art and Design school in Vancouver) right after high chool. My love for painting, sculpture and drawing led me there. But as much as I loved art, I didn't believe that I'd ever make a profession out of it. I didn't really know what I was going to do at Emily Carr. In the second semester of my first year though, I stumbled upon an introduction to Industrial Design class. I had to beg my way into the class since I had missed the sign-up date. When that didn't work, I showed up to the class anyway and eventually the Prof let me stay. As a kid, I was never very fond of math, but I always loved physics. So, the combination of applied problem solving, making and aesthetic discourse in design struck a chord immediately. At the same time came this almost painfully naive realization that EVERYTHING around me had—in varying degrees of success—been designed by someone somewhere. It was fun to explain that to friends and family, and even more fun learning to see that there were opportunities to improve and invent things everywhere. I think that's what eventually led me to the Interaction Design space. For products at the time, it seemed to me like the biggest problem that needed solving.

What's the most important lesson you've learned, and who taught it to you?

I first studied industrial design, then went to Umeå in Sweden to study interaction design. In between my two years at Umeå I took an internship at Microsoft. My first love for design came very firmly through the perspective of industrial design and products. Though I was really excited about interaction design, as a design discipline it still wasn't really clear what it was and I definitely had some trouble with the idea of not being an industrial designer anymore. During that summer at Microsoft I was really starting to struggle with what direction to take as a designer: Basically, was I an industrial designer or an interaction designer? Microsoft arranges mentors for their interns, and mine happened to be Horace Luke, who is now the Chief Innovation Officer at HTC. I remember explaining my career dilemma to Horace one day, and him asking me very simply: "What's wrong with just being a designer?" At first it was hard to believe that it could be that simple, but soon after, it melted down all mental blocks I had that defined or separated those disciplines. Discussions around concretely defining design disciplines started to seem like a waste of time. It's pretty clear that most great designers don't care about those divisions, and are happy to play in any space that catches their interest. That idea has guided my outlook on most things since then—first in trying to bridge interaction and industrial design, then graphic design. And more recently, working for Albert Shum at Windows Phone, we spend a lot of time thinking about Design in close relation to business and engineering. I've been very lucky to have a few managers now that are very open minded about what design is, and are always looking for ways to expand what we do. In a few years, I'm not sure that I will really even define myself as a designer anymore.

What are the 5 things all designers should know? 1. How to tell a great story 2. How to influence, inspire, and lead others 3. How to manage projects 4. How to critique, ask questions, and brainstorm 5. The basics: form, shape, composition, hierarchy, grids, color, type...

Core77 readers! As a special thank you, save 10% off registration until the end of today!! Register now with code FOC77!!