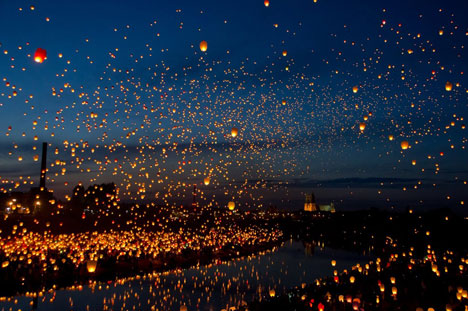 One week from today Americans will celebrate the country's anniversary with fireworks shows, and Core77's hometown of New York will have a huge one, as usual. But we've just seen something more participatory than fireworks, less fleeting, and arguably more beautiful: Citizens of Poznan in Poland celebrated the first official day of summer by releasing over 11,000 paper lanterns into the twilight sky, where they were carried away by the wind.

While New York would never be able to pull something like this off—citizens would complain about the clean-up, someone's something would catch on fire and people would start suing each other—we find this a beautiful and much more communal visual celebration than fireworks can provide.