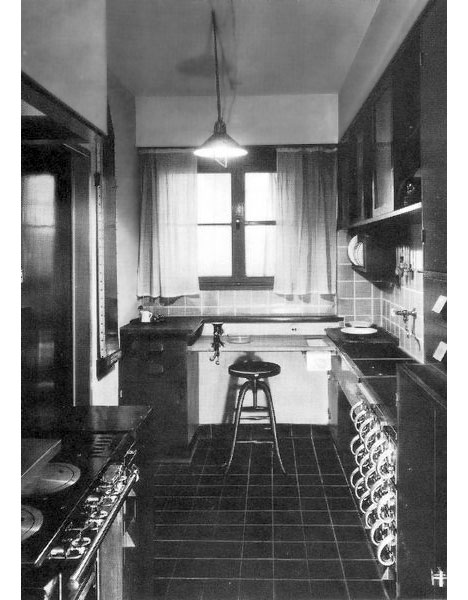 With Taylorism embedded in her mind and the emerging field of Scientific Management gaining traction, Christine Frederick opened the Applecroft Home Experiment Station in her home in New York, circa 1912. It was basically a kitchen laboratory where she tested different appliances and food preparation methods in a Taylorian quest to find the best way to perform a particular kitchen task. She incorporated Taylor's time and motion studies into her methodology and, like Beecher before her, began championing the simple idea of consistent-height work surfaces.

Around the same time she began writing a column for Ladies' Home Journal called "New Housekeeping," in which she not only revealed her test findings, but sought to explain Taylorism to housewives. The column was a hit, and the articles were later collected into a book called "New Housekeeping: Efficiency Studies in Home Management."

Frederick's book was translated into German in 1922, and eventually a copy made its way into the hands of pioneer Margarete Lihotzky, Austria's first female architect. (She was also the first female student at what is today the University of Applied Arts in Vienna, where she won a series of awards for her design work.) Lihotzky was also a fan of Taylorism, and when she was hired by German architect Ernst May for a Frankfurt-based project in 1926, she was well armed with a knowledge of Scientific Management.

In Frankfurt she met a man who changed her name, by marrying her and making her Margarete Schütte-Lihotzky. She subsequently changed the history of kitchens by giving birth to the galley kitchen.

The Frankfurt, Germany of 1926 had a housing shortage. Ernst May was the man called on to solve it by designing public housing units. The budget was tight and space was at a premium, as they would have to shoehorn 10,000 liveable units into the city. 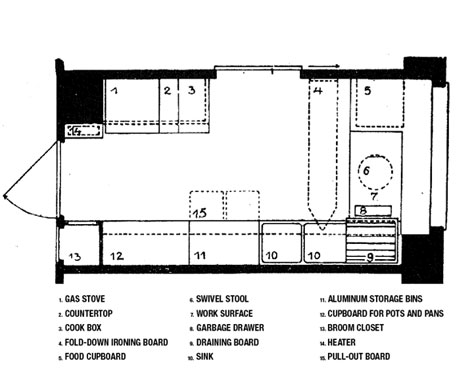 Lihotzky's contribution was the kitchen. She conducted detailed time and motion studies, incorporated ergonomic considerations and reportedly drew inspiration from the kitchen she'd seen in the dining car of a train, which was tiny and yet could produce enough to feed 100 people. Her subsequent design was dubbed the Frankfurt Kitchen. 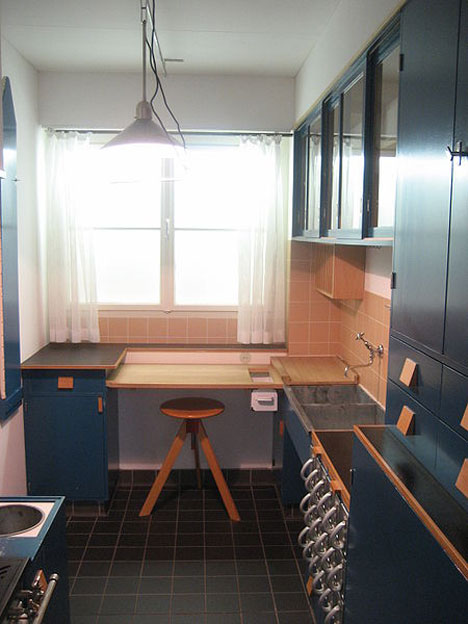 According to the MoMA,

The Frankfurt Kitchen was designed like a laboratory or factory and based on contemporary theories about efficiency, hygiene, and workflow. In planning the design, Schütte-Lihotzky conducted detailed time-motion studies and interviews with housewives and women's groups.

Each kitchen came complete with a swivel stool, a gas stove, built-in storage, a fold-down ironing board, an adjustable ceiling light, and a removable garbage drawer. Labeled aluminum storage bins provided tidy organization for staples like sugar and rice as well as easy pouring. Careful thought was given to materials for specific functions, such as oak flour containers (to repel mealworms) and beech cutting surfaces (to resist staining and knife marks).

The Frankfurt Kitchen must have seemed crazy at the time, because it came with a stove and everything was built in. Prior to that, if you moved into a house, a kitchen had a sink and if you were lucky, a stove someone had left behind. You had to furnish it with your own cabinets and devices. The Frankfurt Kitchen had it all laid out for you and fit everything you needed into a relatively tiny footprint. 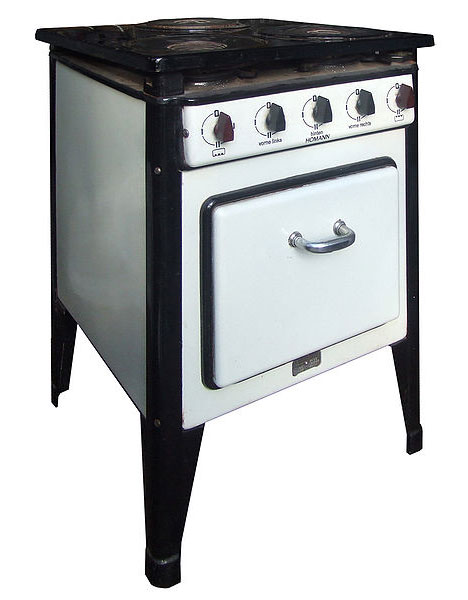 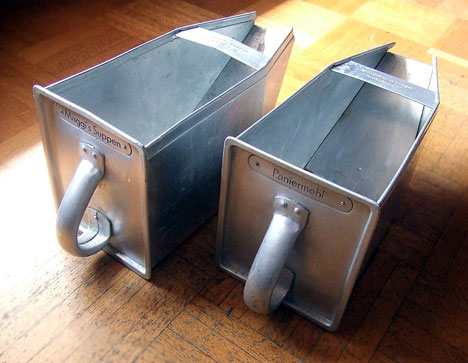 As with many new and radical designs, there were some problems. According to Wikipedia,

...The users of [Frankfurt] kitchens often had their difficulties with them. Unaccustomed to Schütte-Lihotzky's custom-designed workflows for which the kitchen was optimised, they often were at loss as to how to use the kitchen. It was frequently described as not flexible enough--the dedicated storage bins often were used for other things than their labels said. Another problem with these bins was that they were easily reachable by small children. Schütte-Lihotzky had designed the kitchen for one adult person only, children or even a second adult had not entered the picture, and in fact, the kitchen was too small for two people to work in. Even one person often was hampered by open cabinet doors.

Most contemporary criticism concentrated on such rather technical aspects. Nevertheless, the Frankfurt kitchen became a model for a modern work kitchen. For the rest of the 20th century, the small, rationalised work kitchen was a standard in tenement buildings throughout Europe.

You can read more about the Frankfurt Kitchen here and at the MoMA link above. And stay tuned for Part 5 to see how a German cabinet builder helped change kitchen design history.