By 1950 war was in the rearview mirror, things were getting back on track, and Germany held its second annual Internationale MobelMesse Furniture Fair in Cologne (yep, the IMM Furniture Fair of today). At the Fair, nearly 60 years after Friedemir Poggenpohl started up his cabinet shop, the company he'd left behind pulled the wraps off of the Form 1000.

This was the world's first unit kitchen ready to roll out of manufactories. Poggenpohl's interconnected cabinets were refined even further to provide a clean, monolithic appearance, as seen above.

The countertops flowed around a 90-degree bend that hugged the wall and provided tons of space while neatly integrating the sinks. 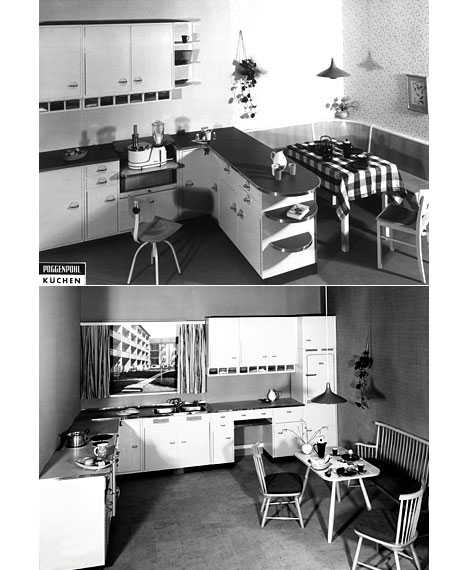 Subtle ergonomic touches like reverse-staircasing of upper cabinets made the topmost easier to reach. 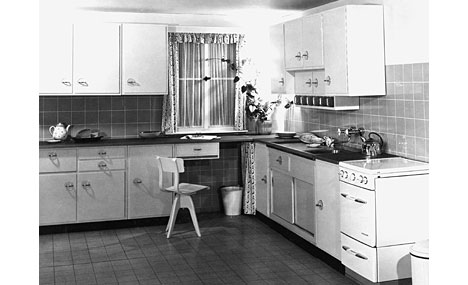 The design was a hit, and Germany began exporting Poggenpohl kitchens to neighboring countries following the Fair.

The Form 1000 cannot have gone unnoticed in America, as subsequent kitchen designs there will wordlessly testify, though it is doubtful that U.S. designers of the time would have attributed this look to a German company. It is important to remember that following World War II, a self-confident America was loathe to buy products from former adversaries, with brands like Volkswagen and Honda being ridiculed well into the 1960s and even '70s.

Nevertheless, Poggenpohl had clearly impacted the history of kitchen design. As a testament to the influence of this design, look at the photos and ask yourself if this kitchen would look terribly out of place today in 2011.

Poggenpohl had set the bar, and now it was time for America to take that bar and bend it into letters that spelled U.S.A. (That is what we Americans do, for better or worse.) An American trend had started in the 1940s that would explode in the '50s: A love of gadgets. Stay tuned.