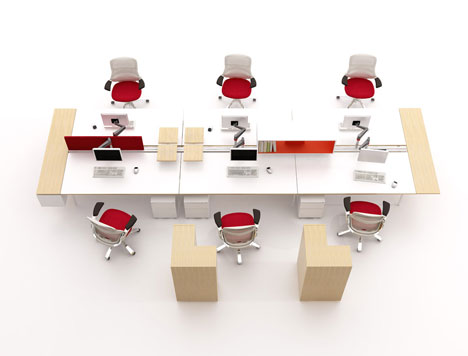 This year's Cooper-Hewitt National Design Award for corporate and institutional achievement was given to furniture design company, Knoll. The award is a timely vindication for the design-focused company, which continued to invest in design even as the economy tanked (Knoll stock price in the first quarter of 2009 sank to just over $5; shares are now over $20.) 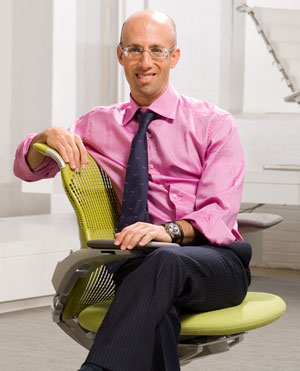 Andrew Cogan, left, has been CEO of the East Greenville, Pennsylvania-based company since 2001. I talked with him about the company's ongoing commitment to innovation, and he described how Knoll has learned to evolve and adapt along with the market even as it continues to emphasize the importance of design to the bottom line ("Workspaces," top, are a new introduction designed by famed New York-based company, Antenna.) An edited transcript of our conversation follows.

Helen Walters: Can you describe the research process at Knoll?

Andrew Cogan: Florence Knoll started the Knoll Planning Unit in 1946. She was well-known for trying to understand the problem clients were trying to solve for, particularly as they were moving into the modern workplace. She spent time studying what was going on in an office, how people interface with each other and equipment and tools. And we continue to do that to this day. We're very client-driven. We engage with a range of individual clients, looking at all the problems they're solving and we think about how furniture can play a role in that. We also do research on a broader level, so we think about a topic such as office seating and spend hundreds of hours filming people in office chairs to see how they sit and move, and that gives insight into designing products. Then we also do third party trend research looking at trends in the workplace. We bring all those insights together into our product design process.

Can you give an example of a client-based project?

We recently did a major program with eBay. They were trying to go to a more collaborative environment, with a lower height horizon, so we looked at how our products could facilitate that. It evolved into a very particular solution of a collection of products that met their needs, both in how they're working today and how they want to work down the road.

What does "lower height horizon" mean, and what are some of the other office space trends you're watching right now?

The lowering of the horizon is driven by social issues, of people wanting to collaborate and see what's going on more. It's also driven by environmental issues. LEED certification calls for more natural light to reach the core of a space and high panels interfere with the penetration of light, so we go lower. That trend is coupled with miniaturization and the mobility of tech. People are spending more time online and doing email and less time on the telephone, so you can create a smaller, more efficient environment. People don't want to feel like they're at some big dining table getting work done, so within a space you have different levels of privacy, adjustability and enclosure.Your most recent introductions include a conference table collection by Lehman Smith McLeish. The idea of the huge conference table is pretty old school. What made you think this was a good time for that line?

They're much smaller than the tables of old. They're not the 50 foot boardroom table. They're for groups of up to 12 and are really more meeting room than board room. You can integrate and access technology through the products: attach speakers for video conferencing, plug in iPads, project on a shared screen. What we do at Knoll is integrate technology into our product. Technology changes at a much faster pace than the furniture. A building changes every 30-40 years; furniture changes every 10-12 years, technology changes every 2-3 years. So we've never believed in the idea of designing furniture for tech. Instead, it's about accepting the technology that's out there and designing a table where people can come around and plug in whatever device they have to share the content that the meeting is about. 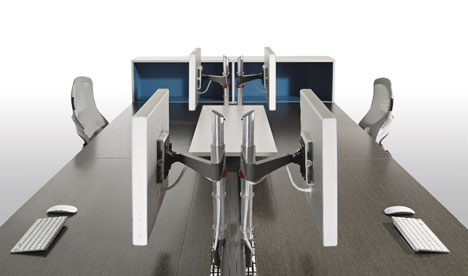 Design is so complex these days that we're arguably moving away from the individual, heroic designer and toward more collective approaches that cater to design systems rather than design artifact. Agree?

Iconic, heroic product always has a role at Knoll. [Richard Sapper's "Monitor Arm" is shown, above.] Look at the work of Frank Gehry, whose work is iconic. We work with the Rodarte sisters who create a heroic [textile] product. We are not going to sell a ton of it and it's not integrated into our office portfolio but we do believe in it and we continue to invest. Yet the mainstay of the business is office environments, so to that extent we need to orchestrate the roles of several designers. That means we share research and have designers meet together periodically to work on the part of program they're attacking as well as working individually—so groups such as Antenna [in the United States] or Formway Design in New Zealand are aware of what's going on. We believe in working with the best talent wherever they are. We don't put designers in a building and say 'design.' We go to the best talent in the world to take on a design project.

How do you manage all those moving parts?

The important thing at Knoll is that all the pieces come together or it could be cacophonous. At [industry showcase] Neocon, you'll see showrooms where all these things come together and it's a mess. We're focused on coordination and orchestration. Florence Knoll did that; a lot of her solutions were rectilinear and square, which she learned from Mies [van der Rohe], and then she added the organic, so you had a crisp desk and a Saarinen womb chair. It's a mixture of foreground and background. With Antenna we have the square, crisp desk, then with Generation/ReGeneration [a line of chairs from Knoll], we have organic, elastic products to bring humanity into the space.

But, practically speaking, how do you juggle all of this?

There aren't a ton of us who do this. We're getting back to a billion dollars in sales now [net sales tallied $220.9 million for Q1 of 2011], but there's still a core group that leads the shared vision of what we're trying to do in individual workplaces.

How much of what you do is directly driven by your customer?

20-25% is customization for clients. When they want to do something quickly, when we don't already have a solution, we can respond in a matter of weeks. And we constantly monitor how those individual requests break down. If we see patterns, that suggests there's something lacking in our standard offer and that might kick itself to 'should we look at a permanent solution for that?' So our work is both client-based and architecture/design-based. It's a constant feedback loop of specials and standards.

So your focus is not always going to be at the bleeding edge of design?

You don't have to be the first mover in some cases. It's good to see others try things out. What Knoll is historically terrific at is watching and then finding the right way to pounce. Take cubicles: we weren't the first but we came in with tremendous force and refinement. We also don't do a lot but we try to do everything well. We're less about speed than thoroughness. The workplace evolves very slowly. We're not GE. We're not in high tech. This is more gradual and evolutionary. Companies don't throw out their workplaces, they constantly upgrade them. So we try to ensure that everything we design integrates with what we've already done. Of course we end up creating new platforms, because you can only extend things so far, but even those work with the things we've already done.

About Helen Walters Helen Walters is a design writer and editor, currently working as an editor and researcher at Doblin, a member of the Monitor Group. Until July 2010, she was editor of innovation and design at Bloomberg BusinessWeek. She's the author of five design-related books and also contributing editor to British design magazine, Creative Review. She tweets. Read more of Walters' work at the Core77 columns!