ACADIA (Association for Computer Aided Design in Architecture) announced the winners of this year's Design and Fabrication competition. Hosted in conjunction with Brooklyn-based fabricators FLATCUT_, the challenge seeked out innovative geometric forms that push the limits of design through the exploration of integrative material strategies for digitally fabricated assemblies. Awarded across three categories, Furniture, Lighting and Partitions, this year's winning projects displayed an interesting array of innovation including unique joinery solutions, expandable design options and the use of complimentary materials.

RECIP is a modular furniture system comprised of mutually reinforcing sets of interlocking rubber panels laminated to heavyweight felt batting. The project draws on the inherent material properties of both rubber and felt to produce a structural system that is capable of both moments of rigidity and moments of flexibility in the same assembly. Thanks to its inherent adaptability, RECIP can be reconfigured to function as a chair, a table, a bookcase, a spatial divider, and any number of other applications.

The project relies on digitally enabled means of fabrication in order to minimize waste and maximize structural integrity. Machining patterns of v-grooves and cuts in the rubber produces a surface that easily folds into the peaks and valleys of the teeth that comprise the locking mechanism for the assembly. At the end of the lifecycle the project can be fully recycled. Designed by Alison MacLachlan, Bryan Gartner and Richard Cotter, all students of the University of Calgary's Faculty of Environmental Design. 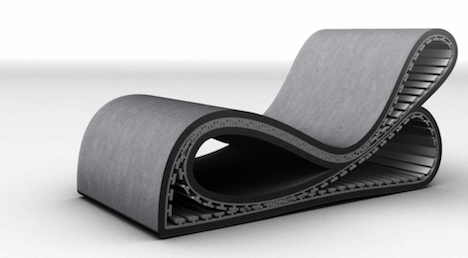 LUMINESCENT LIMACON is inspired partly from the Dutch Ruff, or flamboyant linen collars considered fashionable in 17th century Europe, as a vehicle for the manipulation of light. Defined by the polar equation-based Limacon curve, the roulette curve rolls at various speeds to generate precisely choreographed profiles that are combined vertically to construct a number of formations. Variables can be calibrated to accomodate and produce a host of different lighting conditions and affects depending on environmental factors.

To achieve both the lighting affects and the geometric configuration, the light is composed of 3form Ecoresin. When folded and nested, the ecoresin ruffles are laced together with an associative woven lattice of aircraft suspension cable, which, when combined produce a combination of tensile and compressive forces for rigid structural stability. Design by Andrew Saunders, an Assistant Professor of Architecture at Rensselaer Polytechnic Institute in New York. 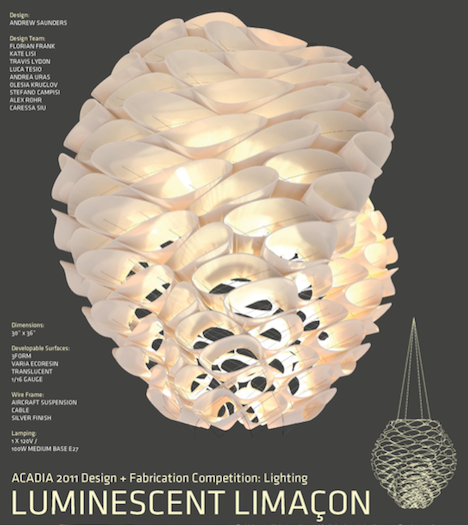 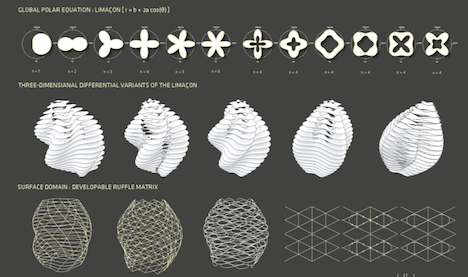 HYPERLAXITY is a system of hexagonal parabolic ligaments composed of aluminum and silicone. The system is secured in compression by the tensioned silicone ligaments which connect all of the rigid aluminum members. Each part is necessary in order to maintain a cohesive assembly. Rather than resolve connections with hardware, HYPERLAXITY is driven by each materials' intrinsic qualities. Integrated connections are achieved through a number of custom elements. Locating tabs in the aluminum compression members are secured through holes in each pair of triangular aluminum plates. Connections between one plate and another are achieved using v-shaped clips which also employ a locating tab detail to create a pinned relationship. Slits in the silicone sheet allow the material to stretch over and wrap the locating tabs of the aluminum profiles. Held in place by this hexagonal silicone network, an aluminum ring its center span keeps the sheets in tension. Designed by Elizabeth Boone and PROJECTiONE.