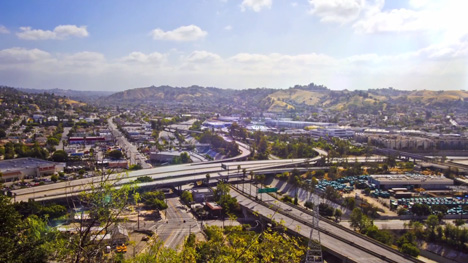 It's L.A.'s version of that Times Square shot from Vanilla Sky: The city bereft of its traffic monster, here shot by filmmaker Ross Ching rather than Cameron Crowe.

Carmageddon was the name given to the expected traffic apocalypse created by last weekend's shutdown of the 405, and Ching captured recently revisited the anti-Carmageddon on video. [EDIT: The original is from last May; he posted the new one on Thursday, in anticipation of the weekend closing. Thanks Alissa and Brit.] Good thing he got there early—the shutdown was supposed to last until Monday, but workers finished demolishing the Mulholland Bridge (the reason for the shutdown) 17 hours earlier than anticipated.