It's Hip to be Square

UPDATE: Mystery half-solved; the bike is based on the BauBike, a 2009 design by Michael Ubbesen Jakobsen... 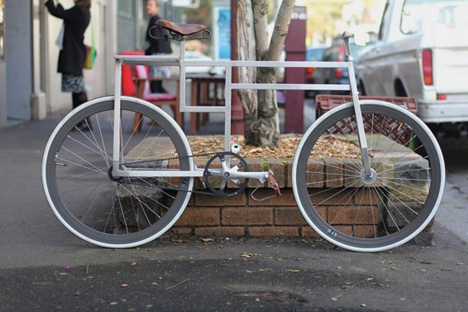 I recently came across images of this mysterious custom bicycle frame at Saint Cloud, an Australian fixed-gear shop. It's something like De Stijl turned into a bike; Le Corbusier might call it a "machine for riding." (In other words, it's the opposite of these.)

The head tube appears to be the only non-right angle in the entire frame, such that the straight-bladed fork comes in at around 10°. (The chainstays, seatstays and fork also appear to be angled at the ends out of functional necessity.) Other notable features include zero bottom bracket drop, concealed bolts and fork ends, a rear rack and presumably a custom threaded headset... though the more I look at it, the more it seems like the whole thing is an optical illusion. 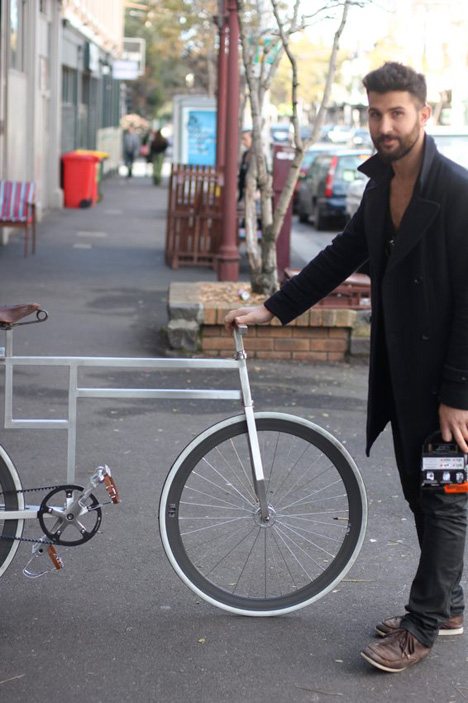 Still, perhaps the most incongruous aspect of the bike is what appears to be a vintage Brooks saddle—and the matching leather straps—though I imagine a steel rectangle would cause some gnarly saddle sores.

Besides wondering whether there is any advantage to using square tubes, I can't quite discern the geometry (no pun intended)... and I'm just curious as to "Why?"

It's Hip to be Square