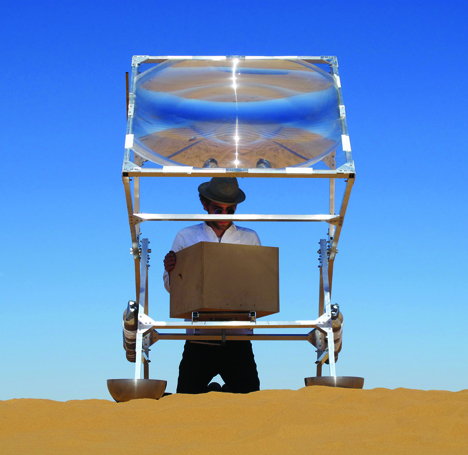 Energy: In the developed world it is ubiquitous, essential, invisible and seemingly abundant. And we have an ever-increasing hunger for it; in fact, a veritable dependence. Our evolving need for electrical power goes back to the 1880's, when a "War of Currents" was fought over how to supply electricity. Alternating current (AC) had the ability to travel over distance, but was infinitely more dangerous; direct current (DC) was safe, and useful for charging batteries, but hard to transport. Nikola Tesla's AD won the day, leading to the widespread installation of our modern electricity infrastructure. We have adapted over time to this convenient energy source, whose true threat became apparent only in recent years.

Distant power plants generate electricity by burning fossil fuels or creating dangerous by-products, emitting increasing amounts of CO2 with little ability to respond to fluctuating need. As a result of this, designers and engineers have latterly dedicated their abilities to drastically increasing the efficiency of energy-guzzling devices, but due to the apparent abundance and relatively low cost of energy, these improvements are vastly overshadowed by the exponential growth, over the last sixty years, in the number of consumer products that are dependent on energy and the number of consumers who are able to buy them. Ironically, many of these products are devices requiring re-charging, that would far better suit a DC power supply. It is clear, therefore, that changing the way we generate and use electricity are equally—if not more important—than the drive to improve efficiency and that rethinking the infrastructure that supplies our energy is an absolute necessity.

In his introduction to Dott 07 (Designs of the Time), John Thackara said: There's a truly gigantic design opportunity here. Someone has to redesign the structures, institutions and processes that drive the economy. Someone has to transform the material, energy and resource flows that, left unchecked, will finish us...Are we happy to let Accenture or McKinsey do it all? I don't think so.

To many people, infrastructure is the most unfamiliar territory for design activity because it moves furthest from design's traditional role of creating objects. It seems rather to be the preserve of disciplines such as finance, politics or engineering. Designers are now challenging this, showing that their skills can be of enormous practical value. This is not a matter of supplanting other areas of expertise, but coordinating discussion between them, visualizing problems and possibilities, prototyping solutions and putting the focus on end users to ensure real needs are met. It is about design navigating and managing complex networks of interdependent factors quickly and cheaply. It is also about design promoting the adoption of new behavior by making it desirable.

In recent years, students from different departments at the Royal College of Art have been considering this issue and coming up with some interesting solutions. Some of these have turned into fully-fledged businesses.

In 2006, design team Jon Sawdon Smith, Greta Corke and Richard Woods realised that the existing tool for helping users understand their electricity consumption was insufficient, providing feedback in numbers that meant little to the average energy user. They re-designed the smart meter to create the "Wattson," which translates watts into pounds spent, delivering the message in green characters that become redder the more you spend. Made available on the desk of the mayor of a town or the facilities officer of a large corporation, this could have an enormous impact. 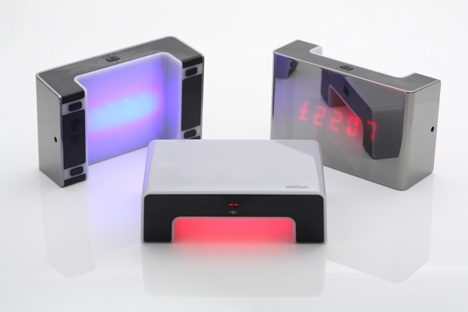 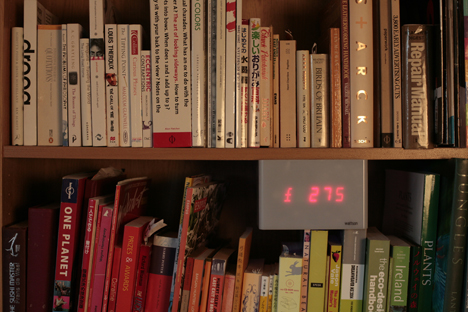 Another group of students, Ross Atkin, Chris Holden and Edward Murfitt took this step one step further, with their project Potential Energy. The project explored the hypothesis that electricity scarcity will almost certainly be part of all of our futures, with every UK household having a smart electricity meter with a two-way communication link to their supplier by 2020. Potential Energy exploits this opportunity to change the way people relate to electricity; making a difference to the environment and their wallets.

The group explored the past, the future and far away places to learn how people deal with scarcity in many contexts. Potential Energy is based on key insights gleaned from this journey. It proposes three electricity tariffs, each with a novel interface model, such as the Energy Jar, which foresees a future in which energy is rationed, and displays a daily availability of power disappearing with use, encouraging consumers to change their behavior by continuously engaging them with their energy use. 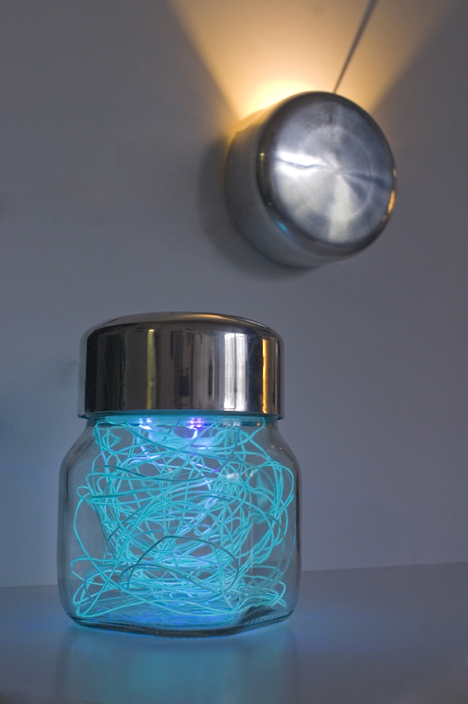 The Energy Jar displays a daily ration of energy disappearing as it is used.

Virginia Gardener's approach to energy took a very different approach, considering how energy might be supplied to the developing world without mimicking the infrastructural errors of the developed world. "Loowatt," in fact, is a waterless toilet system that converts human waste into energy. The toilet uses a unique sealing mechanism to package feces and urine into an odorless cartridge, within a biodegradable lining material. The cartridge is emptied once or twice weekly into an anaerobic digester. The digester converts human waste into natural gas and fertilizer, commodities that pay back the community. "Loowatt" was incubated as a start-up business by Design London, and the first fully functional "Loowatt" system is currently being tested. 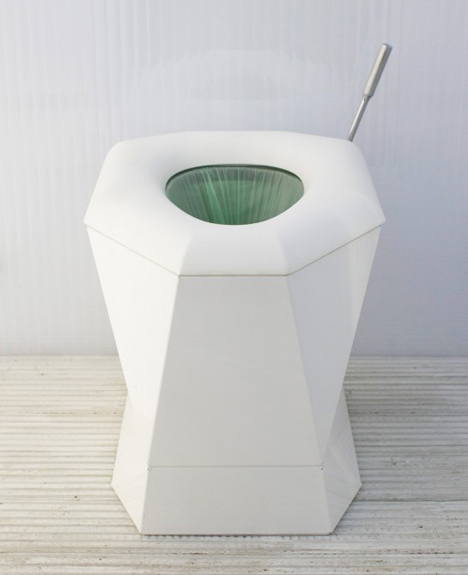 Dejan Mitrovic, Mike Buffington and Damian Palin similarly looked at health issues in developing countries where energy is scarce, considering that surplus heat in the form of dying cooking fires could be sufficient to make contaminated water drinkable. Their project, MyWater, took as its starting point the fact that an estimated one billion people in the world do not have access to fresh drinking water. Bangladesh is one of the countries most influenced by climate change, and its population is in need of clean, safe drinking water. MyWater is an appropriate low-cost technological solution for decentralised desalination in Bangladesh. 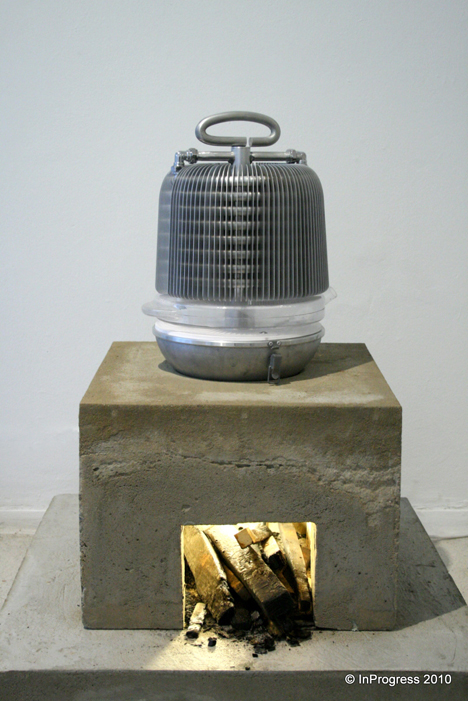 In a similar vein of addressing two issues simultaneously, product design student Lisa Johansson designed a distillation system that can convert food waste into bio-ethanol, enabling communities to achieve a degree of energy independence while reducing the amount of food waste going to landfill. 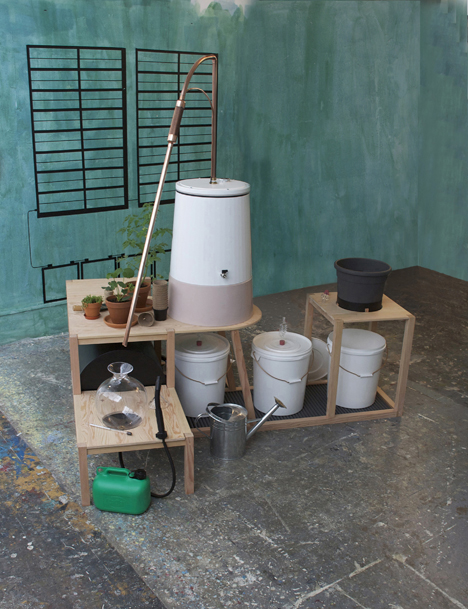 Controversially, Design Interactions student Oliver Goodhall looked at the need to reconsider nuclear power. "If we are facing a global energy crisis, our solutions will need to be dramatic, free-thinking and "anti historical", approaching the problem of our continued survival without reliance on the earth's dwindling non-renewable resources". The premise of Nuclear is Good. What Will It Take to Convince You? is that historical judgements will need to be consigned to history. This project takes a frank and strategic look at the future, stating that there needs to be a fundamental rethinking of how we approach energy production in the face of climate change. "The nuclear renaissance," claims Goodhall, "offers a clean, near-limitless energy solution that could allow us to meet CO2 emission targets without going short as consumers, but science has consistently failed to put forward a convincing argument." 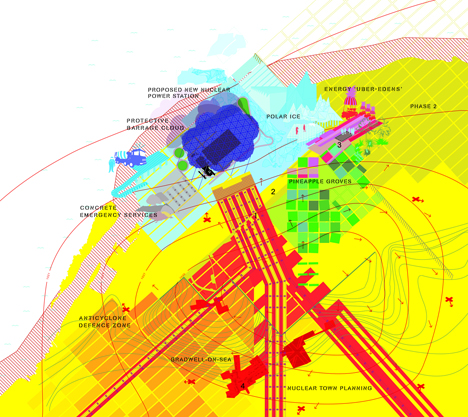 Finally, from this year's graduating projects, Markus Kayser's "Solar Sintering" machine certainly stands out. In a world increasingly concerned with questions of energy production and raw material shortages, this project explores the potentials of desert manufacturing, where energy and material occur in abundance. Sunlight and sand are used as raw energy and material to produce glass objects, using a 3D printing process that combines natural energy and material with high-tech production technology. The designer says: "Solar Sintering aims to provide a point of departure for fresh thinking about the future of manufacturing, and to trigger dreams about the full utilization of the production potential of the world's most efficient energy resource—the sun."