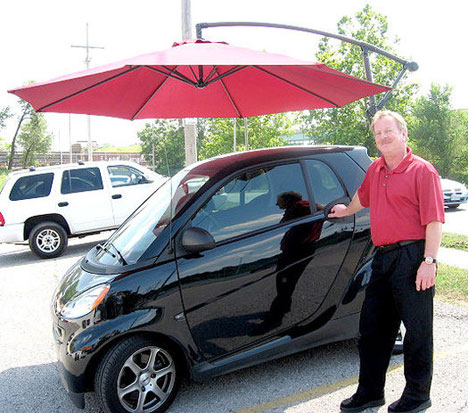 The amount of heat collected by a car in a summertime parking lot is amazing, and it's a shame no one's figured out how to harness that energy. Instead it wastes energy, as we put the A/C on full-blast with the windows down and try not to touch anything metal.

Kansas-City-based industrial designer Michael Staley might not be harnessing that power, but he's at least devised an interesting way to keep his car in the shade independent of location. Staley built a rig that attaches to his car's trailer hitch and supports a standard patio umbrella.

Staley bought the red patio umbrella last year on eBay, but it wasn't until this summer—motivated by burning his fingers on his car's steering wheel after work—that he started tinkering with parts he had in his workshop. The collapsed system fits in his car, as long as he doesn't have a passenger.

Might not be practical in its current iteration, but if this is version 1.0, we're looking forward to 2.0 and 3.0.