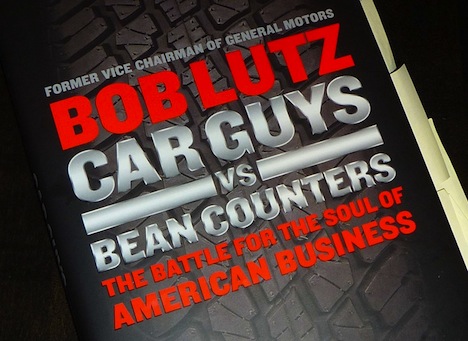 GM has routinely been singled out in the last two decades as an example of a bloated enterprise that is so focused on maximizing today's profit that it sacrifices its very future to do so. According to Bob Lutz, that is a fairly good description of GM when he arrived in 2001 as Vice Chairman in charge of product development. In his book, Car Guys Versus Bean Counters, he chronicles the very wary GM of 2001 through it's first still-born turn-around, it's acquisition by the American and Canadian governments and it's new born success since 2009.

It might seem that a book written by a businessman about how to turn around a business would have little to say about design. In fact, it is clear that Lutz has only a small understanding of design. However, he consistently argues for its position at the front of product development through-out this book, from the horrible failures of the '80â€²s and '90â€²s to GM's incredible success of the last few years. 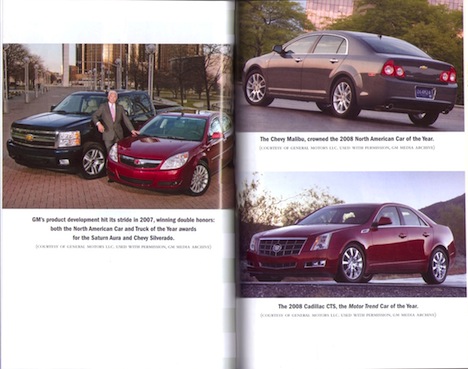 To start with, Lutz reminisces on the some of the early super-star designers that GM made: Harley Earl and Billy Mitchell. Earl is responsible for creating the GM styling department. After working as a coach builder for years, Earl was hired to design the 1927 LaSalle (a now defunct GM brand). It was such a success that GM president Alfred P. Sloan decided to create the GM art and color section with Harley Earl as its chief. Earl's success and brilliant work got him all the way up to a Vice President in GM, the first designer to become a VP in a major corporation.

Billy Mitchell took over from Earl in 1958. Mitchell continued a GM prominence in automotive styling, as well as design's leadership role in defining products. Lutz recounts the story of Mitchell sending a man to Ferrari in Italy, buying a brand new Ferrari for list price, flying it back to Detroit where Mitchell instructed GM engineers to remove the Ferrari V12 and put it in a new Pontiac Firebird concept car he was working on. Mitchell then called the chief engineers down to the GM proving ground. As the Ferrari Firebird V12 circled the track, with it's engine screaming, Mitchell told the engineers, "That's how the car should sound!"

However, as GM continued to evolve, the design department lost it's flamboyant leaders, with Mitchell retiring in 1977. After which, inspired by the successes of Toyota and Honda, GM leadership became obsessed with efficiency and repeatability. In the 1980â€²s, executives with a purely business background were placed in charge of development projects. All decisions started to be based on metrics and complicated mathematics rather than the emotional touch that successful products always use.For example, long term planning decisions began to be based purely on metrics. Worse yet, because they were dreamt up by MBAs and accountants, the metrics lacked any relation to the real motivations of consumers. Lutz challenged one group, asking how they missed the niche the PT Cruiser filled a few years earlier. The group responded that they had in fact predicted it: "Multi-place monospace is in our chart." Lutz responded that the description would never lead to the fashion driven retro-styled success of the PT Cruiser.

As this kind of decision making dragged on, it took a toll on the designers. Lutz recounts hearing of a chief designer becoming physically ill during a project, so disgusted were they at all of the compromises that the executives in charge were forcing. Eventually, the designer had to take nearly a year off to recover!

In spite of this loss of spirit, Lutz doesn't blame designers, saying of Wayne Cherry, GM's VP of Design, "Designers are artists, and artists, by and large, are gentle souls and have little or no taste for harmony-destroying conflict." That fits in pretty close to what I've seen working with corporate designers. However, as Bill Buxton from Microsoft likes to say, "Designer rhymes with whiner." Corporate designers (me included) tend to complain a lot, but we always believe we can inspire the organization with our work rather than outright confrontation. Unfortunately, at GM, this was not the case.

Another aspect of the decline was, ironically, a focus on quality. However, as Lutz points out, an absence of complaints does not equal quality. To illustrate, he describes the way the paint engineers had reduced the sheen in GM's paints in order to hide the normal small paint quality problems (runs, drips, etc.) at the expense of the visual impact of the car. The engineers pointed out that GM had the lowest number of complaints about paint in the industry. However, the dull paint was uninspiring.

Luckily, Lutz was the kind of executive to turn product development around. Lutz was always a product-centered executive, working his way around many big players: GM Europe, Ford, Chrysler and finally his role as chairman. Lutz was brought in by GM CEO Rick Wagoner specifically to turn around GM's dismal products. Lutz demanded and received the powers he needed: ability to terminate any duds in the current pipeline and being placed in charge of all of the powerful product development executives.

Lutz's biggest challenge was weening GM off of the metrics and get it back in touch with emotions. "The error with traditional product planning methodology is that it crowds out art, creativity and spontaneous invention. It assumes that automotive consumers are highly rational people who will perform analyses and elaborate feature comparisons before making their purchases," Lutz writes of the situation. The comment reminded me one of GM's biggest mistakes: the Pontiac Aztek. 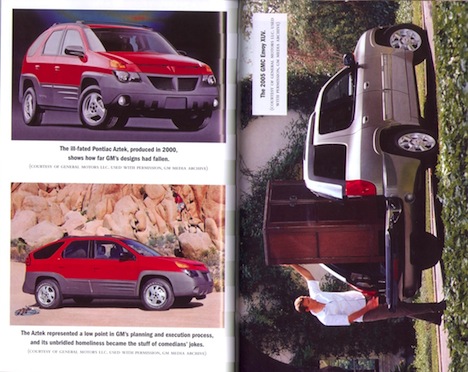 I've long argued that the Aztek was the perfect concept that could not have been executed worse. The proof of that is the Nissan Xterra. Both vehicles were based around the concept of supporting customers who have a lot of outdoor sports hobbies who want a vehicle that can transport there gear out to the mountains and rivers and then act as a home base. The Aztek performs this activity, perhaps better than the Xterra. However, the Aztek wears its cost on its sleeve: based on an aging mini-van platform with a wheezy motor and large flat (i.e. cheap) body panels. It reminds one more of a electric wheelchair than exotic crafted outdoor gear that it was intended to carry. The Xterra tapped straight into that outdoor inspiration with its chunky design and great details, like the Swiss army knife looking roof rack and integrated first-aid kit.

Such cost-cutting was rampant in GM. Of course it was, because non-design aware executives were making the critical design decisions. Lutz reversed this by making the designers the last word in styling decisions. One example was on the Chevrolet Impala. The designers wanted to add a chrome surround around the side windows, but executives wanted to delete it as un-necessary and expensive. The chrome stayed and the Impala became a quiet success at GM.

Lutz also drove to close the perceived quality gap with GM's competitors. For example, he called on the engineers to improve the panel gaps, which had once been described as being so large that a horse could make love to them. Surprisingly, the remedy required very little investment. It was just that the "standard" had been accepted for so long, no one thought of changing it!

The rest of the book chronicles the more political side of Lutz's campaign: the development of GM's own hybrid, the Chevy Volt and an insiders look at GMs takeover to become "Government Motors" from 2009 until 2011.

Overall, I highly recommend the first eight chapters of "Car Guys Versus Bean Counters" to all designers. It's an inspirational read that reminds us of how important our profession is and that we are experts too. It's also a great book to drop into your company's President's mailbox if you feel they are becoming too focused on that kind of narrow idea of "quality" as being an absence of complaints. Lastly, read this book if you are a gearhead!