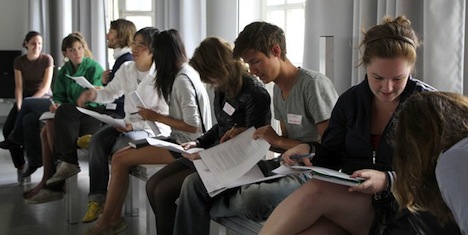 Sticks + Stones Sticks + Stones, a collaborative project, gathers graphic design students from diverse geographical regions to explore their similarities and differences, to examine their perceptions and misconceptions of the "other," and to create a greater understanding of their responsibilities as creators of visual messages.

The rhetorical strategies in visual communication strongly influence how we think, vote, spend and live. In a global information culture where designers assume the responsibility not only to serve client interests but to be pro-active, ethical citizens we all are the beneficiaries. The principle axiom driving Sticks + Stones is that the more communication designers know about our similarities and differences, whether real or imagined, the better we can shape responsible expressions for increasingly diverse populations. Our first, and most critical constituency is the project's student body. Even amid the complexities of inter-cultural relations and the large scope of the Sticks + Stones agenda, it's vitally important to begin at the level of existence for the individual student and to build a model of the designer/citizen who is able to distinguish the universally ethical from that which is relativistic and culture-bound.

The project's primary investigators, Ann McDonald, Mark Biddle and Audra Buck-Coleman, were scattered across the Unites States when the award announcement was made: Audra watched the live broadcast on her computer and Ann listened to the broadcast via her cell phone. Mark was off-grid during the announcement. We called and emailed each other and our students the fantastic news when we heard that we won. It was quite an exciting moment for this project, and we were eager to share it.

Our success in Berlin soon yielded an invitation to a similarly themed collaboration hosted by Shandong University of Art and Design in Jinan, China entitled "Family & Growth." Students and faculty from the United States' schools traveled to China last October to participate in this project. The culminating exhibit bore the marks of the Asian perspective on Sticks + Stones' core themes.

We definitely plan to repeat the success of the 2010 Sticks + Stones project with another international collaboration. We are investigating potential collaborations with immigration-themed museums and venues, but we have not yet finalized the details.