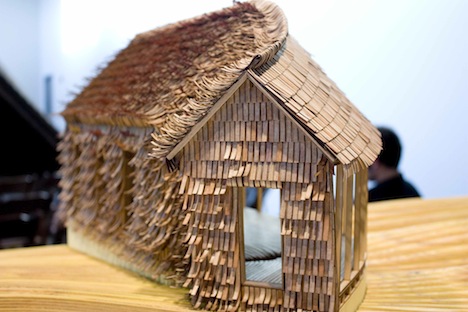 Images and Reporting by Carren Jao

Casual passerbys stop in their tracks, fascinated by the shingles that curl without care in SCI-Arc's current exhibition of Jason Payne/Hirsuta: Rawhide - The New Shingle Style.

A partial reproduction of a planned Utah renovation, Jason Payne, principal at Hirsuta and SCI-Arc alum, attempts to "pervert" the shingle-style architecture, or rather, swerve it. 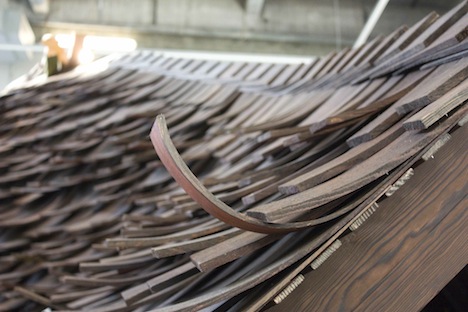 Payne intentionally attached 1/2" thick shingles "improperly" on only one side of a residential project. Each shingle was unfixed at the bottom with the grain oriented horizontally rather than vertically to encourage "curling." On the other side of the residence, everything was attached according to conventional wisdom. The result is a house literally with two faces. One, wild and feral; the other, staid and reliable. In short, a contemporary twist on a classic architectural style. 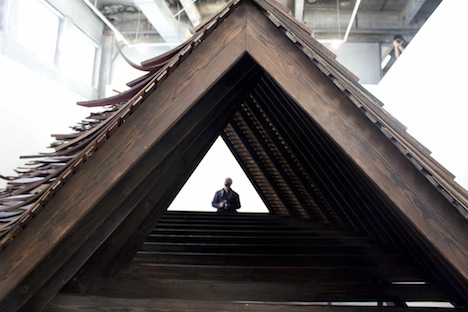 Rawhide is an outgrowth of Payne's growing dissatisfaction with smooth and bald surfaces.

Building surface as "hide," however, seems a fresh new way to push the dialogue of cladding toward and expanded array of associations and models less well-known to the discipline. Possible interpretations abound: where the skin is bald and shaven, the hide retains its think fur. If the skin's geometry is immediately and completely apparent, that of the hide only flirts with visibility, and only then after the luster and texture of its hairiness has been combed through.

Like the architect's own hairstyle, the shingles on one side of the reproduction is anything but smooth and predictable. Shingles merrily flip this way and that, as if caught by a sudden gust of wind. "The point is not that hair is the wave of the future," says Payne who likens the result to bearskin or hide, "but how do you bring extra-disciplinary subjects into architecture."

Payne also did away with the Utah schoolroom's original bilaterally symmetrical silhouette. By curving it on the southwest side—where over 90 percent of storms pass through in the area—Payne intentionally added more impetus for his unusual shingles to curl and weather. As each season passes, the irregular shingles will transform one side into an increasingly full "hide" for the home. 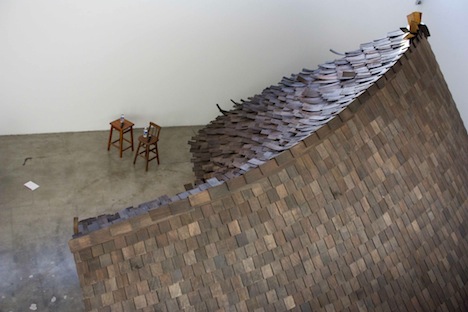 Though, like a haircut, the benefits of Payne's experiments with shingles are purely cosmetic, the results are a visual treat and a refreshing change from the usual play on surface texture.

Rawhide: The New Shingle Style is on view through September 12th.