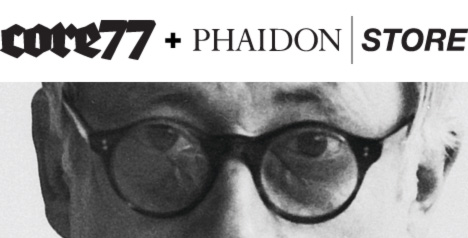 Hey you! That's right, we're talking to you.

Enter the Core77 + Phaidon "Good Design Is Long Lasting" Design Challenge and your sketch will be included in our Dieter Rams product line on view at the Phaidon Store in New York City. PLUS, you'll be entered to win a copy of the SOLD OUT book, As Little Design as Possible: The Work of Dieter Rams.

Doors are at 6:30; Panel begins at 7 Cocktails to follow RSVP: store.soho@phaidon.com with the subject line "Dieter Rams."

The exhibition runs from August 10–24; don't forget to send us your drawings by August 8th so they can be included in the the exhibition! Complete details on the contest can be found at http://core77.com/phaidon. 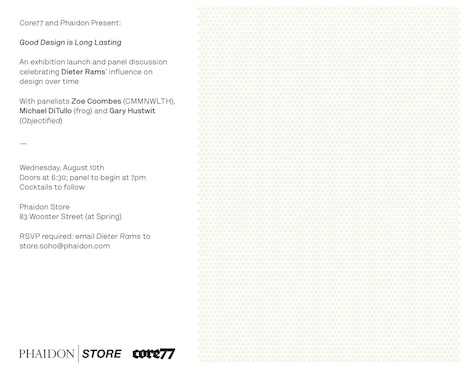 About the panelists:Zoe Coombes Zoe Coombes is a New York based designer who in 2005, along with her husband and creative partner David Boira, established the internationally recognized furniture design studio, 'Cmmnwlth'. Recent clients include the MoMA, Warp Records, and the American furniture label, MatterMade. Recently featured on the cover of The New York Times 'T' Magazine, Boira and Coombes' were presented as some of New York's 'hottest new talents', and Cmmnwlth as one of America's most exciting design studios working today.

Michael DiTullo As a creative director at frog, Michael DiTullo is a passionate advocate and experienced practitioner of design. He has worked with a diverse array of companies such as Intel, Google, Procter & Gamble, Honda, Nike, Converse, Burton Snowboards and Harman Kardon and has products in production in the housewares, consumer electronics, automotive, medical, eyewear, timepiece, fashion and performance footwear industries. DiTullo is a contributor to Core77.com and was most recently featured in the book,

Dieter Rams: As Little Design As Possible (Phaidon). Michael is frequently a featured speaker at universities and design conferences and often a juror for international design competitions and awards.

Gary Hustwit Gary Hustwit is an independent filmmaker based in New York and London. He has produced six feature documentaries, including

I Am Trying To Break Your Heart, the award-winning film about the band Wilco; Moog, the documentary about electronic music pioneer Robert Moog; and Drive Well, Sleep Carefully, a tour film about the band Death Cab for Cutie. Hustwit worked with punk label SST Records in the late-1980s, ran the independent book publishing house Incommunicado Press during the 1990s, was Vice President of the media website Salon.com in 2000, and started the indie DVD label Plexifilm in 2001. Hustwit made his directorial debut with Helvetica, which has been screened in over 200 cities worldwide. Hustwit is also the director of Objectified, a documentary on product design.