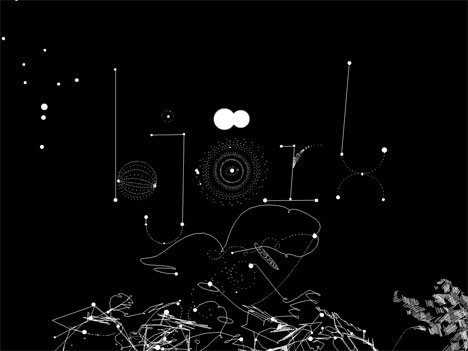 We love it when creatives play with the tenuous lines between physical and virtual experiences. Björk recently dove deep into this sort of exploration with the release of her newest album, Biophilia, as a suite of iPhone/iPad apps—leaving us with a (growing) treasure trove of interactive goodies. She collaborated with artists, designers, instrument makers, software developers (M/M Paris, Scott Snibbe) and others to create the production, based in themes of nature and technology, all with music as the guiding principle.

Björk's music itself has grown organically over the years to incorporate greater complexity and symbolism, continually testing the boundaries of art, music, and technology. With Biophilia, Björk pushes herself and the concept of an "album" to the limit, creating a multi-faceted system for iPhone/iPad users. The album itself is an application (the 'mother' app), and each song is its own app with various interactive capabilities. (Only 2 songs are available at the moment - "Cosmogony" is free with the mother app, and "Crystalline" is $1.99.) 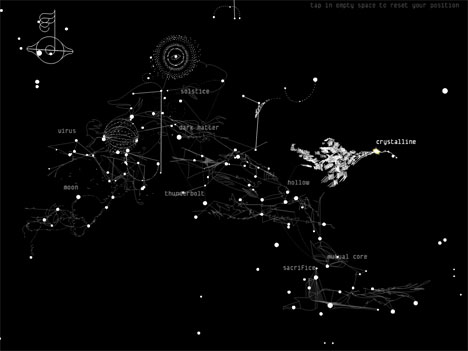 The Biophilia/"Cosmogony" app serves as the 'home' for the whole system—which, appropriately, is rendered as an interactive astrological system/hub for delving into the different galaxies of songs. The "Cosmogony" song introduces the album suite, complete with an introduction to the concept of the album by David Attenborough, famed nature film host (providing instant nature-geek cred to the project). 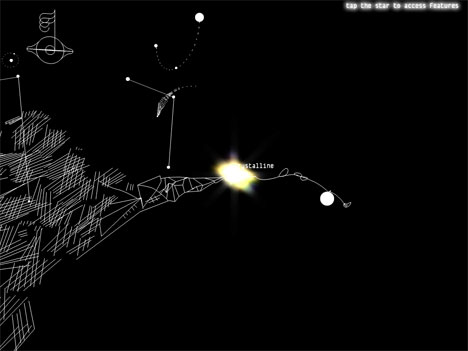 Each of the two songs available now, "Cosmogony" and "Crystalline," can be explored through a variety of options. Put on headphones, and with the iPad, the experience of any of these options can be engulfing and mesmerizing. The interactive elements of each song relate to the song's subject and structure, adding depth of visual, interactive and educational elements expertly matched to the sound and meaning. Additionally, colors and shapes were designed specifically to represent instruments and tones. 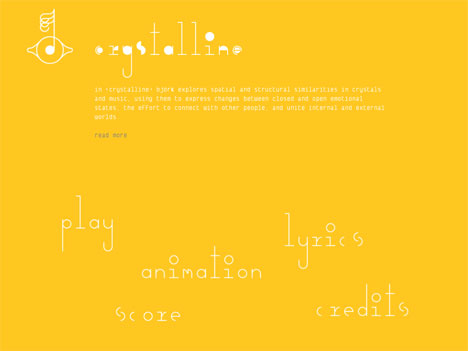 With "Cosmogony," select "Song" to play the song while a visual animation takes you on a trip through a galaxy created by M/M(Paris). Select "Animation," and a series of colored geometric shapes connected by lines move across the screen as the song plays. You can touch and mold these webs, condensing and abstracting them, but the music stops when you do. The "Score" option takes users through the score by showing the tablature and lyrics as the song plays. 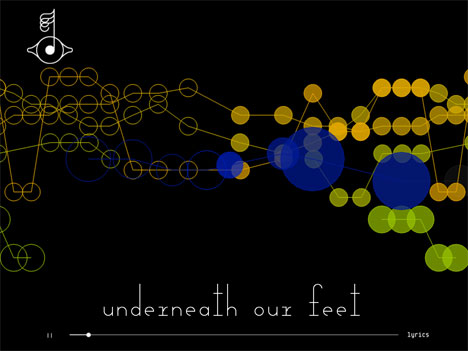 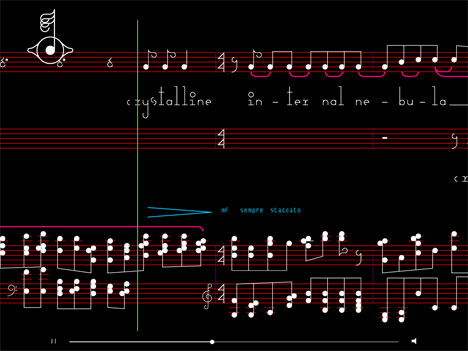 The most interactive and interesting option so far is the "Play" element for "Crystalline," a game in which users journey through geometric tunnels collecting crystals, to build a crystal of their own. The experience of moving and shifting the iPad to play the game, with the song providing the soundtrack, is wonderfully engaging and a great way to see/hear/play with music. 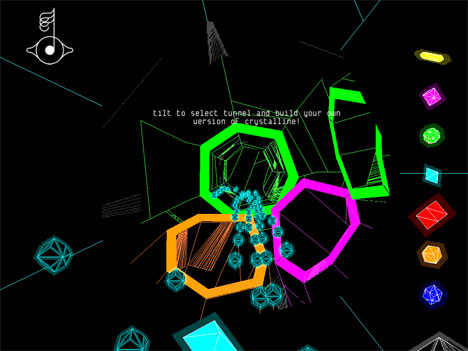 But wait! The complexity and collaborative nature of Biophilia doesn't end with the app. In creating the music for Biophilia, Björk commissioned the creation of several new musical instruments. They include four 10-foot pendulum-harps created by MIT Media labs graduate Andy Cavatorta, a 10-foot pin barrel harp (the Sharpsichord), and a Gameleste, a midi-controlled pipe organ and celeste re-fitted with gamelan bars. (Video of its creation here). Björk also recently released a new, lush video for "Crystalline" (below), created with long-time collaborator Michel Gondry.

And of course, Björk re-designed the whole touring experience, planning on six-week residencies at nontraditional venues in eight cities through 2014. The residencies will include curated exhibitions featuring instrument and app demonstrations, with an educational component teaching kids song composition and the basics of musicology.

If all this isn't enough to keep her busy, Björk also created an actual physical album (gasp!) for all the music artifact obsessives out there (who have an extra $812 to drop). A limited edition of the album includes an oak box with: 10 chrome-plated tuning forks, one for each track on Biophilia; a cloth-bound Biophilia Manual; essays and the actual album (on CD) with extra tracks. 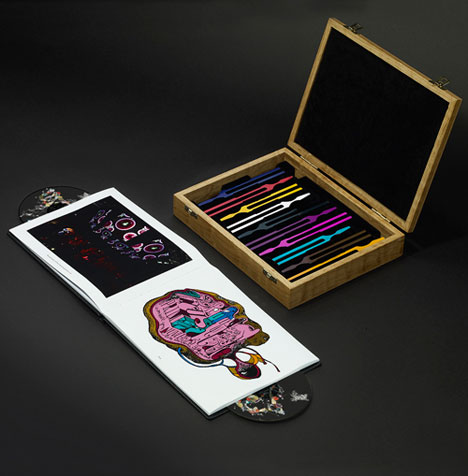