An Industrial Designer with an Unusual Client: The Dark Side of the Force 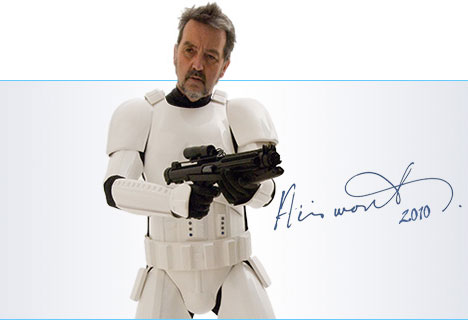 Imagine being a British industrial designer in the 1970's, and an artist buddy hired by an upstart American director asks you to produce helmets and costumes that the bad guys will wear in some intergalactic space epic. Andrew Ainsworth, an ID'er whose dual mechanical engineering/industrial design background enabled him to design his own plastic molding machinery, took the gig and cranked out the original Stormtroopers for George Lucas' Star Wars. 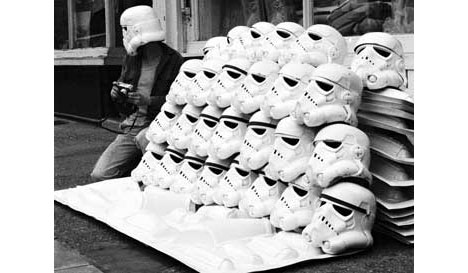 Andrew's task was to take his friend [artist Nick Pemberton's] clay model and Ralph McQuarrie's concept drawings and sculpt the moulds which would form the iconic white plastic helmets worn by the Stormtroopers in ANH. Andrew recalls "The concept drawings from Ralph McQuarrie suggested that the Stormtrooper was a futuristic being that had evolved through continuous genetic modification, and perhaps able to operate in adverse pungent climatic conditions. The helmet would therefore be able to filter noxious gases and the armour be so flexible that it could have actually grown on the character that way—much the same as an armadillo has natural armour."

It was obvious to Andrew that no joins or fabricated parts should be seen, the character should be homogeneous and so the head must flow into the body and be undercut to disguise any suggestion of an actor inside the costume. The surface of the character was to be hard and protective, but flexible with a smooth, slick finish. The drawing suggested a silver, metallic look. Producing a prototype with all these features would be a challenge, given the non-paying, speculative nature of the job.

Here's a present-day video of Ainsworth whipping up one of the helmets in clay:

An Industrial Designer with an Unusual Client: The Dark Side of the Force