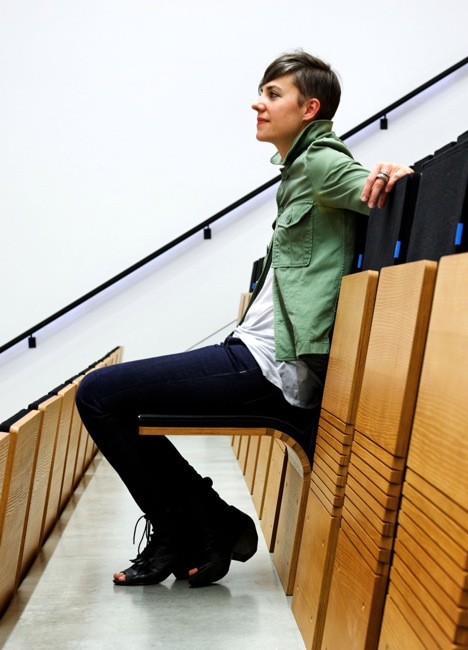 The Jumpseat is a super minimal seating system for auditoriums that fits in a fraction of the footprint of typical stadium or theater seating, and uses a unique hinge mechanism to minimize material use.We have an auditorium space in our headquarters that seats around 150. It has a beautifully minimal interior that would make traditional stadium seating look out of place, so for its first months of use, audience members sat directly on the concrete risers.

After several months of relative discomfort, we began investigating standard stadium and theater seating, with little success. Existing options clash visually with the clean white walls, unfinished wood and bare concrete of the building interior, and the narrow risers make it difficult for people to pass those already seated. We realized that the environment called for a new kind of seat—something that doesn't just serve the space, but significantly breaks with traditional standards of event seating. 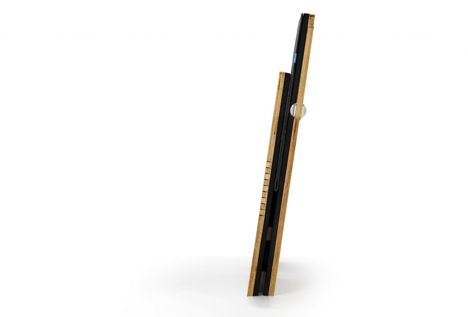 Core77: What's the latest news or development with your project? We are currently working with a manufacturer to license the JumpSeat and also developing accessories for the chair. We hope the chair will be available in early 2012.

What is one quick anecdote about your project? One of our goals was to make the chair as flat as possible, because the risers in our Auditorium were so steep. We wanted to maximize the pass-through space so that audience members could easily get to the middle seats. The eureka moment came when we considered using individual slats of wood with a slight gap between pieces, that when then properly reinforced, formed a bendable hinge strong enough to hold a person. The lead designer on the project went straight to the shop to do a small, rough prototype and as soon as we bent the slats to test the strength, we all knew the reinforcement would be enough strength for a seat.