Prasad Boradkar's "Designing Things: A Critical Introduction to the Culture of Objects" 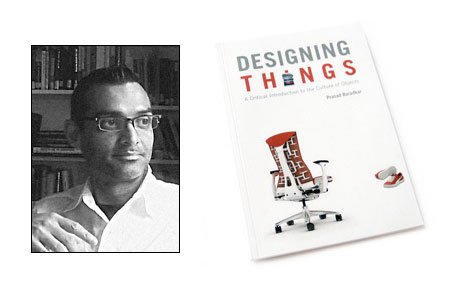 Two months ago, Prasad Boradkar quietly released Designing Things: A Critical Introduction to the Culture of Objects, a book on design and design studies that seeks to connect objects and theories.

When and why did the turntable morph from playback device to musical instrument? Why have mobile phones evolved changeable skins? How many meanings can one attach to such mundane things as tennis balls? The answers to such questions illustrate this provocative book, which examines the cultural meanings of things and the role of designers in their design and production.

Designing Things provides the reader with a map of the rapidly changing field of design studies, a subject which now draws on a diverse range of theories and methodologies—from philosophy and visual culture, to anthropology and material culture, to media and cultural studies. With clear explanations of key concepts—such as form language, planned obsolescence, object fetishism, product semantics, consumer value and user needs—overviews of theoretical foundations and case studies of historical and contemporary objects, Designing Things looks behind-the-scenes and beneath-the-surface at some of our most familiar and iconic objects. If Boradkar's name looks familiar, you may recognize him from one of his TED talks; if you're a student at ASU you'll also recognize him as an Associate Professor/Coordinator of Industrial Design, and he's also the director of ASU-based think-tank/design lab InnovationSpace.

"Designing Things" is currently available on Amazon in hard copy. Sadly, there's no eBook version yet available; fittingly this book about objects exists, at least for now, only in physical form.

Prasad Boradkar's "Designing Things: A Critical Introduction to the Culture of Objects"