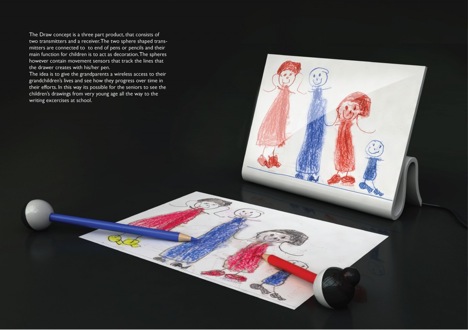 The Draw project is a study on the subject of cross generational communication. It is a concept that relies on the natural communication tools between the young and the elderly.

I am really interested in finding out natural ways of doing the chores of a daily life. In this project I wanted to see if it's possible to challenge the existing methods of wireless communication. The target group was set to be the seniors and their grand children. I wanted to find a simple and easy to understand form of interacting. Drawing is an universal communication tool that especially children take great pride in when they succeed in creating a picture after tirelessly putting a lot of effort in it. This will to show and share their original works made me think of a way to bring the hobby of drawing to the 21st century's wireless world. 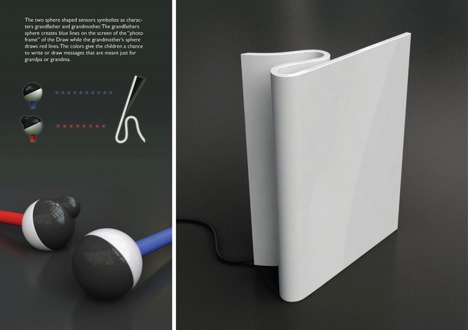 To be brutally honest as the project was a self-initiated short term design exercise, the concept hasn't really taken off in any sense nor was it meant to do so. That being said I wish to return to it in some shape at some point in the future. For now I guess I would happy if anyone found it inspirational as a concept and was able to draw some inspiration from it to fuel their own projects.

I guess it would have to be the incident after receiving this award, when a friend of mine asked me oh-so-politely how long did it take me to use the extrusion tool of a 3d software to create the final shape. Less is more, I suppose. 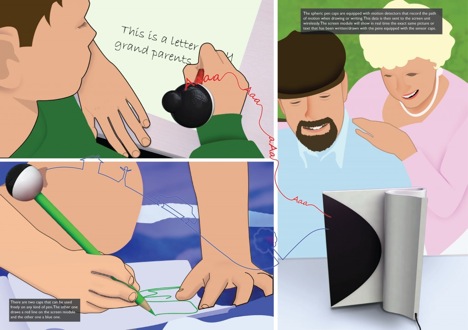