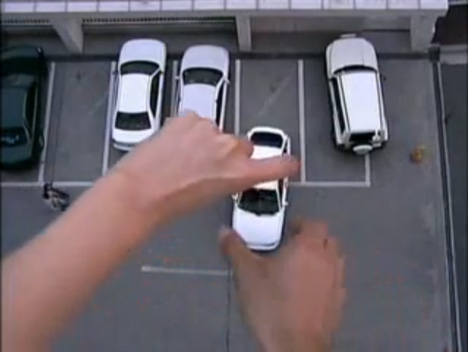 Berlin-based artist June Bum Park's amusing short films are something like an urban planner's version of The Kids in the Hall's "I'm crushing your head" bit:

Silly or profound, I cannot stop watching them. "WHO ARE YOU TO PLAY GOD?" chortles one YouTube commenter. A more intelligent analysis comes from ArtNews:

In his short films... June Bum Park plays around with... shifts in scale: everyday scenes such as parking a car, constructing a building, or crossing a road are animated by gigantic hands (the artist's own), and people and objects turn into playthings of a higher power. The manipulations appear tiny, their movements seem pre-determined, and all the figures do not let themselves be distracted from their goal. Cleverly they evade the intruder's hands and continue on their way with the determination a column of ants. June Bum Park re-organizes the realm of human beings through the film medium. Repetitions, with slight adaptations and shifts in scale create a new environment, transferred onto virtual images, which then expose the structure of that environment.