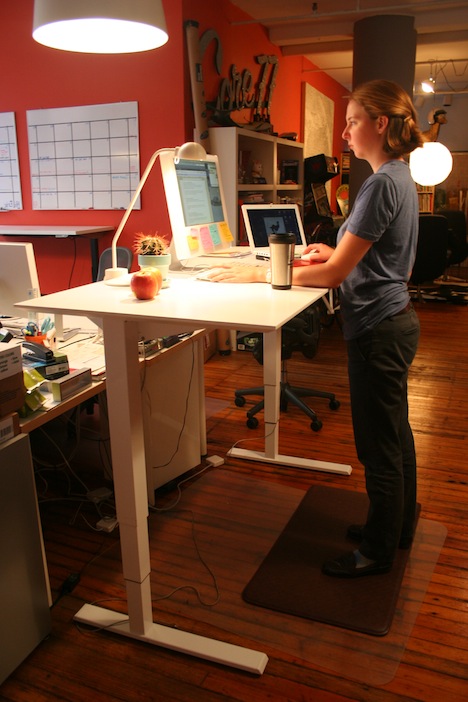 Practically any desk would have been an improvement on what I had before Float: two 18"x36" rolling tables set at a right angle. Compared to this diminutive workspace, transitioning to the Humanscale Float Sit-Stand Height-Adjustable Table (with an expansive 30"x60" tabletop!) was like moving from a pre-war studio apartment to a High Line penthouse.

Float's minimal base is backset and consists of two heavy telescoping legs made of recyclable steel. On trend with similar sit-stand desks, Humanscale eliminated the crossbar so my shins were safe from the hazards of leg crossing. The table supports are spaced far enough apart to accommodate wheelchairs, yoga balls, Aerons, or what have you. Rather than automating the height adjustment mechanism, they chose instead to create a unique counter-balance system that allows the user to move the tabletop up and down by pressing a lever and applying minimal force. No motor. No cords. The counterbalance can be finessed with a removable crank so the height can be adjusted with ease whether your desk items weigh 0 lbs or 120 lbs (average is 20-25lbs). 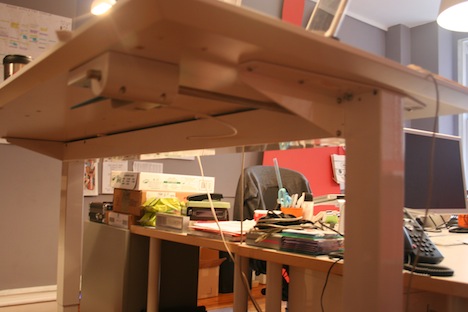 The pneumatic tube controls the counterbalance action in the legs.

Unlike most other sit-stand desks, Float's tabletop is interchangeable and can accommodate worktops ranging in length from 42" to 72" and width from 24" to 30" as well as the worktops of other manufacturers. Humanscale even allows clients to purchase the base alone if they would like to supply their own tabletop.

The top I used is made of white laminate that was elegantly minimal-looking but made me keenly aware of desk grime and coffee rings. Its beveled edge added a nice touch of lightness to the sturdily constructed table. Float isn't slated to go to market until November March 2012 so the full range of options has yet to be revealed but we do know the desk will be available in white, silver and black finish options.Humanscale will also be offering some excellent sit-stand accessories including monitor arms that allow for further customization and proper monitor placement at all desk levels. Also available is a keyboard platform that can be mounted to the underside of the tabletop to not only free up surface space but also accommodate users on the lower side of the height spectrum (a sit-stand for kids! kidding). The keyboard platform has full range of tilt, depth and height adjustment and retracts beneath the table. 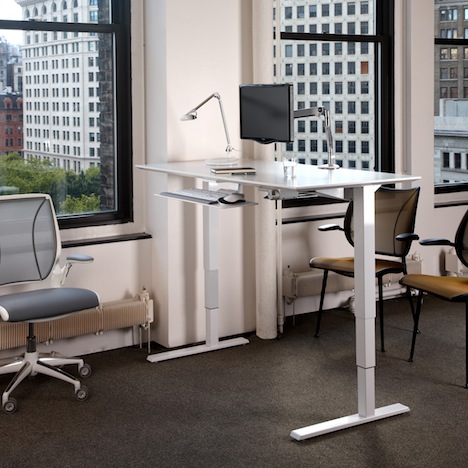 Adjusting the height was incredibly easy. All I had to do was stand, pull up on the lever located on the underside of the tabletop, and gently lift the table to the desired height. It only took a few of seconds. Lowering the table took the same lever action with a slight downward pressure on the tabletop. There is also a safety mechanism that locks the position if too much weight is on the table so it won't come crashing down. 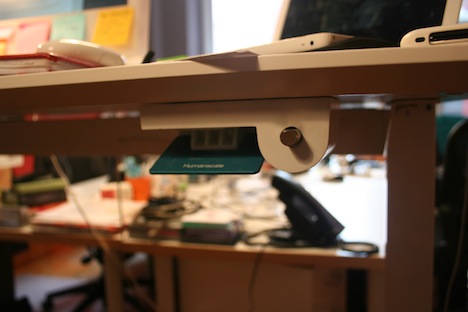 An unexpected bonus was being able to raise the seated workspace height above the typical 30-inch tall stationary desk. Why are we expected to conform to one-size-fits-all furniture when everyone's bodies are shaped differently? It was also surprisingly nice to be able to raise or lower the desk by just a few inches when I wanted to lean while standing or focus on my laptop vs. the full monitor.

Humanscale has been emphasizing Float's "one hand height adjustment" but honestly, it is easier to make the transition with two: one hand on the lever and the other hand applying the raise/lower force. Perhaps, for me, it was just intuitively odd to lift a desk from one side.

One of the more luxurious features is the amount of legroom when sitting. I tend to cross and re-cross my legs a fair amount and have sported many a bruise from hitting my knees and shins on hidden crossbars. Float was magnificently free of leg-crossing peril. I also prefer the L-shaped supports to my four-legged Knoll desk at home. Because Float's supports are toward the back of the table, the cantilevered top does actually feel more float-y than something with legs at all four corners. And the cantilever gave it a better profile when extended to the standing position. 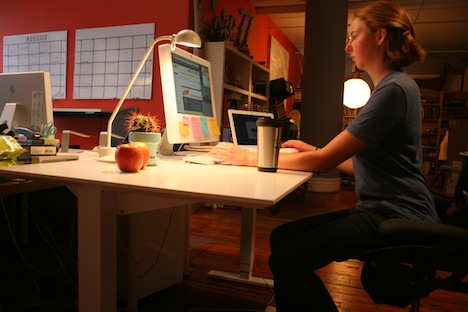 I thought that I would use the standing feature more than I did. Even after I became accustomed to working while standing I probably didn't stand for more than a third of my workday—though I liked using the height transition as a mental break between tasks. For me, the difference between the typical seated desk and the Float sit-stand was definitely more mental than physical. While reviewing the desk, I choose to stand on Imprint Mats "Comfort Floor" mat (anti-fatigue mat reviews are forthcoming) and I never felt fatigued by the desk but when I had to do more focused brain-engaged tasks, my impulse was to conserve energy and sit down. Data-entry and email checking were best done standing.

The enormous size of the tabletop (30”×60”) made me feel rather dominant in the space when standing and I would probably not choose such a large work surface if I was going to purchase a Float.

It wasn't until examining a rival sit-stand that I fully appreciated Float as a non-electric table. I despise the aesthetic chaos of power cords. Overall, the desk is simple and elegant and I must confess to feeling a slight futuristic thrill every time I adjusted the height.

Float is available from Humanscale in the United States beginning March 2012.