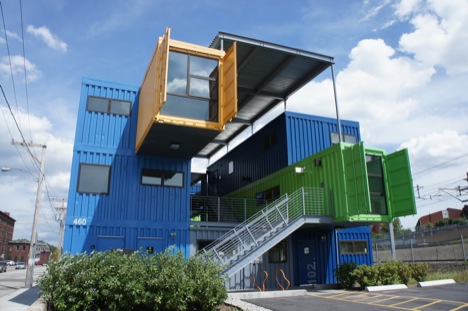 We sat down with Joe Haskett of Distill Studio to talk about his extremely successful shipping container building, the Box Office, and other projects in the works.

Core77: What are your goals as an architect?

Joe Haskett: I feel that there's a lot of disservice that architects and designers have been doing over the course of the twentieth century—that we're the ones who can solve a lot of the problems that we've created. It really finds itself in the form of energy efficiency and sustainability. The decisions that we make and the people that we aggregate together to make these decisions are critical. I think we've been doing poorly in that as architects and designers.

I really wanted to look at the process of architecture. Looking back at the way architecture's been practiced before, it was typically in a vacuum between owner and architect. An owner would come to an architect and in order to keep costs down at the beginning they'd ask us not to bring in a bunch of consultants. What would happen is that architects would make a bunch of assumptions without bringing in people who would know [the effects of their decisions].

What I'm trying to do with Distill Studio is to perform an integrated design process. People have been doing this for a while, but it just kind of expands and opens up that front end of the project. It brings in all the stakeholders and decision makers. It really asks the questions first rather than later, because when you ask these questions when it's too late you're definitely going to spend more money. And the project is going to suffer - that's the most important thing. The way that Distill Studio approaches buildings is looking at them as ecosystems. When you look at nature, it's a closed system. It doesn't have any of these outs. "Oh, we're just not going to account for that." We try to look at them as an opportunity to not only make better projects, but to try and solve some of the larger issues that we face as a country and globally. 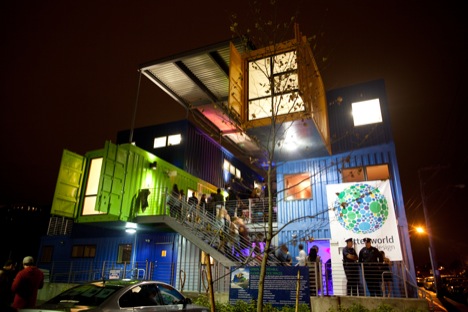 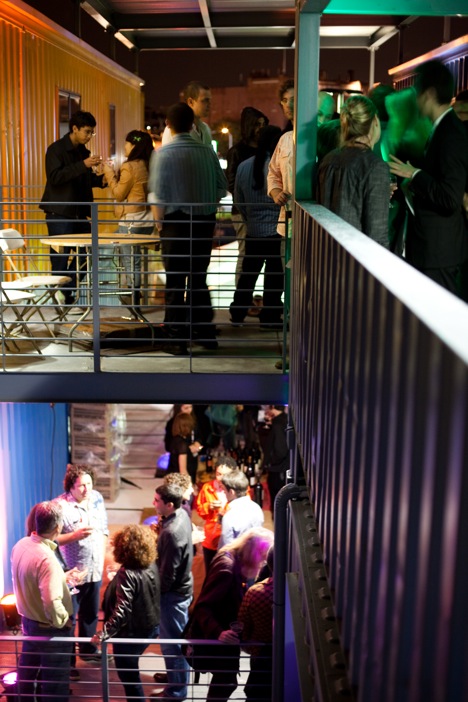 How did you get involved working with shipping containers?

We had designed a building that was going to be more typical, that was going to be energy efficient. We were looking at a LEED certification. But the economy tanked and the owner was like, "I can't afford that." So it really put us in gear to figure out a way to approach building and design from a different way. We looked at pre-fab and modular and ended up looking at these containers. We didn't set out to do a container building; we kind of backed into it.

What kind of consultants do you usually work with?

We've had a couple of what I call "pow-wows." You invite people who are in the building continuum: architects, designers, mechanical engineers, electrical engineers. But one of the most important factors in that group are the banks. A lot of the time people will get all that together and then they'll go to the bank. If we're going to change the way we design and build, it really depends on the banks and how they lend and the terms they will lend upon. Because, if they're scared, they won't lend. If you're trying to propose something that seems off the wall or overly unique, they get scared. If they get scared, they don't lend...These pow-wows try to bring in the bankers who lend the money to green light these projects and expose them to some of the decisions and the thoughts that we're having as designers and people who are interested in the environment. 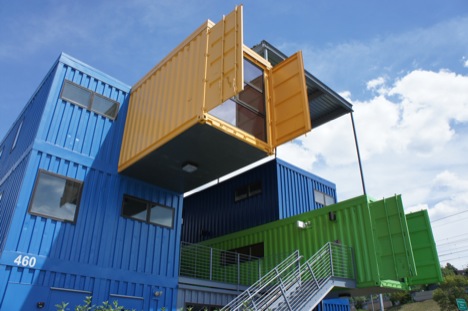 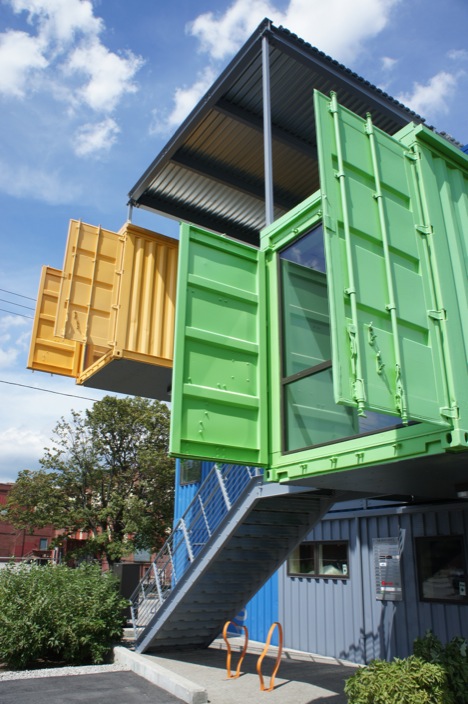 One of the moments I love about this particular project are the cantilevers we have...I was in an integrated design meeting. I had the cantilevers and was pushing them out a little bit...If you look at [model railroad] 1/8th scale containers, they are to the detail. So we used those. A typical cantilever can be pulled out a third. [The structural engineer] says, "I know you have it out five feet but let's go like thirteen feet four inches," which is a third of a container. We can eliminate two column lines and now we can support the stair. That move, pulling it out that far, really put in motion this whole design. It really came from a static design to a much more dynamic, kinetic design. That was because the structural engineer was at the table listening to me... That for me really highlights the integrated design process. 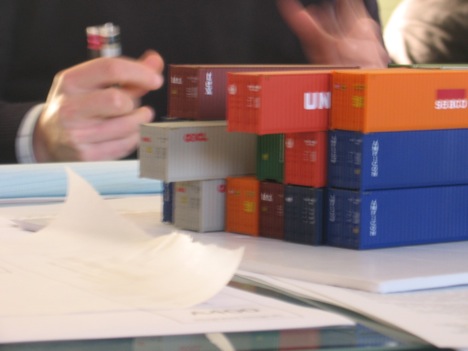 Is the Box Office a one-off? Would you want to do more shipping container buildings?

My concern was using containers as a form of architecture was going to be looked at as a folly. As the project came together and it really started to gel, it became much better than I anticipated. But the way that it aggregated and the way that light hits it and the way that it performs... you can't know that till you're actually in it. As far as doing other buildings, we've had a lot of people come to us.

When you look at container architecture, [Puma City] is one that comes to the top. But we're trying to develop something that's not so temporary, but something that is permanently impermanent - moveable buildings. 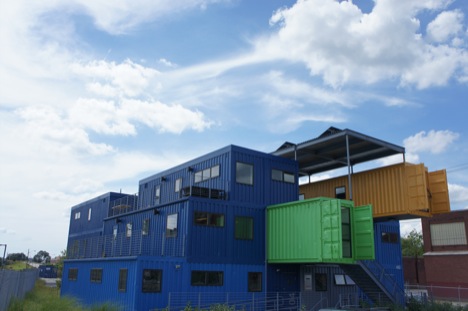 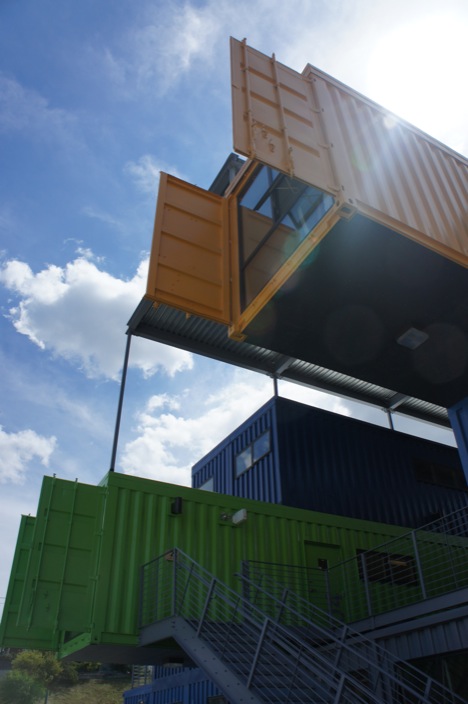 Are you OK being pegged as the container architecture firm?

Using the container has been much more gratifying from a design standpoint. There are ways to aggregate it differently...You know it really doesn't bother me at this point.

We're also working on a multi-family home. This starts to dovetail into the idea of something that's moveable... One of the things we've been looking at is the idea of underutilized space. Peter Case [the developer of the Box Office] and I responded to an RFP put out by Brown and RISD. They were targeting small start-ups. Out of about sixty companies, we ended up winning it. RISD put on a studio for a full semester based upon our idea which was the idea of a single container being something that could be designed, mobile, be operational within eight hours, and move anywhere you want around the world. What happened in the course of that semester is that market demands shifted, and then it wasn't so much of a single container, it was a larger scale building.

One of the other things we're developing is an interim step architecture. Something that could come out and land. A building that could be aggregated in a week, that could be there three or five years, but could leave whenever they wanted, when that hundred-year bricks-and-mortar building wanted to come in. We started a new company called UBIGO [pronounced "you-be-go"]—so it's the idea of "go anywhere, go everywhere." 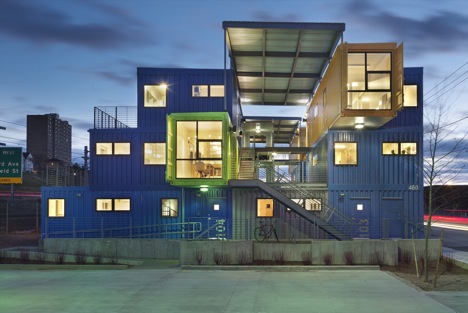 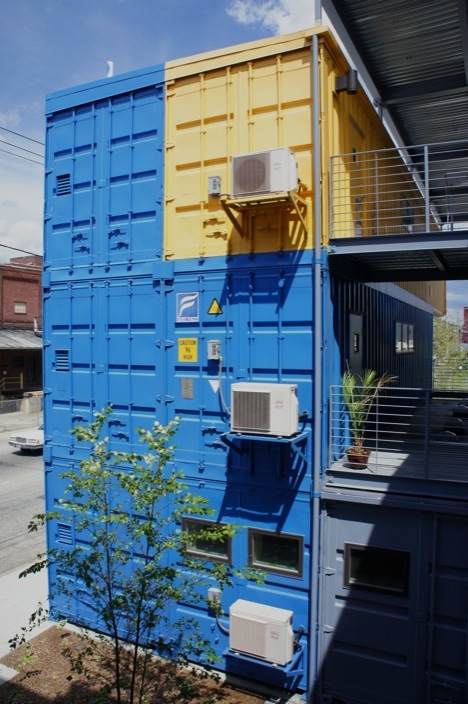 The "truth window" is the only location where stickers were left on the shipping containers.

Have you considered doing any disaster relief work?

We've dabbled into it, but what we've found is that the disaster relief arena - there's a lot of people working in it. There are a lot of people who are much further along than we are. It can be a bureaucratic nightmare. If the right project were to come along, we'd definitely be interested, but the barrier to entry is so great.

[My old boss] had this thing where he said, "you never wake up as an architect going, 'You know what, I figured it all out.'" Every day you come and think about design and sustainability, and the challenge is always great. For me that's the exciting thing that really keeps me going.

The thing that really gets me up out of bed is: what are the things we can do to not just look at form and how form physically manifests itself in the built environment, but how can we help a crumbling infrastructure? How can we as architects go into different realms where most designers don't think is the realm we should be working in? If you look at design and how it can impact your daily life, [infrastructure systems are] the realm where we can really help and affect things in a better way. Don't be afraid to look at what some of us may consider mundane design, what is typically the purview of an engineer.