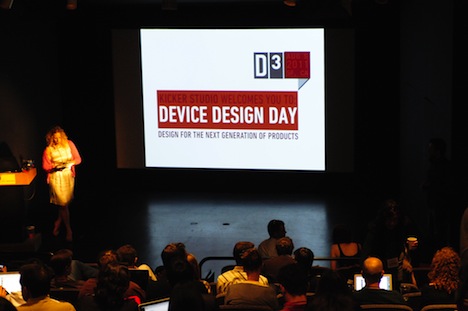 For the second year running, Kicker Studio's wonderfully alliterative Device Design Day managed to be a great advert for small, compact and focussed conferences. Taking place over a day in the beautiful surroundings of the San Francisco Art Institute campus, the conference aimed to unite interaction and industrial designers in a conversation around the crafting of physical products. The overall theme emerging from the various presentations was an exploration of how meaning is truly created in product experiences, whether through mediums such as aesthetics, touch and gesture, intelligence and emotional cognition, audio design or by fundamentally rethinking the relationship between people and objects themselves.

Ammunition's Robert Brunner opened proceedings with a presentation that explored this world of meaning surrounding a product and how that ultimately adds to the importance that people imbue in it. He looked at how stories are woven both in the world of branding and marketing of a product as well as in the physical and software interaction design itself, using a couple of Ammunition's more well-known projects to illustrate this point, the most relevant being Beats by Dre. This turns out to be a really good example of how much more impactful a product can become once we understand the story behind its development—how a piece of the artist we might aspire to be (in this case, Dre's preferred sound profile) can become embedded in the devices we buy.

After Liz Bacon of Devise braved no less than two fire drills to deliver an overview of considerations and opportunities within the burgeoning field of medical device design, it was NASA's Cori Schauer who provided the first real geek tickle of the day with a look at how the environment and technology at Mission Control at Johnson Space Center has evolved over the years—think lots of screens, blinking lights and big tactile clicky buttons, all surrounded by charts and graphs that are decipherable to a select few.

Aside from the sheer general awesomeness of gaining even a tiny insight into a cloistered environment such as this and the requirements and considerations for designing to support situations where there is zero margin for error (and where such error leads to, in a best case, a very expensive loss of equipment), there were just a whole slew of interesting anecdotes and photographs of tools that remain in use even when supposedly better, more modern tools have been introduced. Hearing Schauer's observations and her thoughts around how to introduce change into an environment with high emotions at play—"it's our friends up there"—was truly fascinating.Willow Garage's Leila Takayama continued the theme of topics guaranteed to hit a particular geek sweet spot: robots. Presentations about robots that I've seen previously have all tended toward the theoretical, which can be great, but there is only so much discussion around robotic ethics that one can endure. So it was fascinating to see someone from a well-funded company that is actually engaged in creating robots that are real, shipping products, and to hear the types of design challenges that Takayama faces while she tries to build robots that fulfill real needs and withstand the tests of the market. One particularly interesting point was how to create emotional engagement between humans and machines that share some sort of human physicality. Takyama and her colleagues are working at ways in which to expose the internal workings of robots to build emotional affinity by imbuing a robot with more human characteristics—having it scratch its head when its unsure about something—has proved to strengthen the bond with its owner. Leila also demoed a sound library that Willow Garage developed in conjunction with a sound designer from Pixar (that is open sourced and available for download, here.)

After lunch, Mike Kruzeniski from the Windows Phone team shared his thinking around introducing stylized elements to a product experience—not just creating an experience to have general appeal but how we might begin to craft interactions that speak to a more intentional specific aesthetic sensibility. The recent, deliberately text-centric Windows Phone UI is a perfect, recent example of this.

Continuing the theme of audio design that had bubbled up in a couple of the previous talks, Jawbone's Karen Kaushansky then discussed the challenges surrounding designing spoken word feedback systems—devices that talk back. This outlined another emergent area that the designers of tomorrow's products will have to consider more and more and Karen also drew a series of insights from her long experience of working with speech technology at Microsoft.

Charles Goran of T-Mobile then gave an entertaining talk on the legacy that the once-wildly popular (so popular that Jay-Z even featured it in one of his videos) early versions of the Sidekick had left at the company, and how the essence of the original product was distilled into a series of design "pillars" and and brand "drivers" within T-Mobile that drove the creation of the hardware and software for the latest Android-powered Sidekick, resurrected earlier this year. 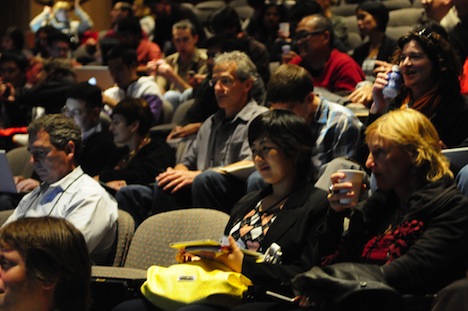 Kicker's own Jody Medich then spoke on a subject that in the last couple of years has become more of a pressing concern for interaction designers—how to make the newer technology, that encourages us to touch it, even more tactile.

And the conference closed with a Branko Lukic, who gave an enlightening talk centered around his idea of the NONOBJECT manifesto: a way of rethinking the paradigm of user-centered design by fundamentally seeking to redefine the relationship between people and the objects they encounter and use.

At the closing party (held also to celebrate Kicker Studio's third year in business, which is no mean feat for a small company in the current economic climate), the cocktail discussions revisited the question of how these very different aspects of product and interaction design create meaning and how we, as designers of these products, might get to shape more stylized types of physical and software interactions while crafting the stories that surround them. And, as far as the success of the conference is concerned, being provoked in this way is all that an attendee could ask for.

Ben helps to lead Methodâ€™s interaction design team in San Francisco. His twelve years of experience span working within teams large and small, both in-house and consultancy, and from startups to corporate behemoths. Ben has worked on projects with many different areas of focus, beginning on the web but expanding to include mobile, brand, application, strategy, product and service. Prior to joining Method, Ben has spent time at Adaptive Path, IDEO, Twitter, Samsung, UK-based service design pioneers live|work, and Oyster Partners, a big British web agency you'd probably only remember if you still have the scars from the first dot bomb.

He teaches, currently at the California College of Arts, has written for Interactions magazine, Core 77 and FastCompany among others, and has spoken at a few different places like South By Southwest, Design Engaged, Webvisions and UX Week. He is also involved as a mentor with the Designer Fund, and has served as technical director on the committee of the last few Interaction conferences ('10, '11, '12 and '13) for the Interaction Design Association. Ben's work has been recognized by the IxDA's Interaction Awards, the BAFTAs, the Spark and the Pixel awards.