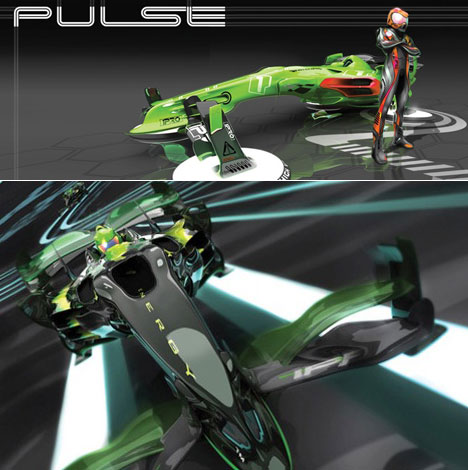 Harald Belker is a California-based industrial designer specializing in concept vehicles for Hollywood, and he's worked on everything from the Batmobile to the lightbikes from Tron and the race cars in Iron Man 2. Belker's recently-released graphic novel/coffee table book, Pulse, is a collection of futuristic vehicle renderings tied together by a fictional narrative:

PULSE features Harald Belker's vision of the future of racing...In 2035, private conglomerates have harnessed magnetic levitation (Mag-Lev) to create trains that get people from place to place in a fraction of the time.

To advertise the cutting-edge technology and sheer speed of Mag-Lev, events were held with a handful of machines and fearless racers. Within a few years, PULSE Racing Grand Prix were hosted in major metropolitan areas with the funding of the cities. The world of Pulse racing is introduced and illustrated via elaborate drawings and digitally rendered futuristic vehicles while telling the story of an adventurous young man thrown into the whirlpool of an all encompassing and physically grueling sport. 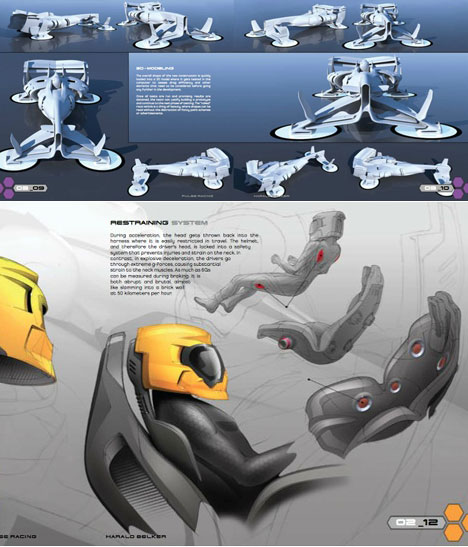 The inclusion of Belker's ID-style renderings inject this sci-fi tale with a modicum of plausibility, along with nifty concepts like his restraint system (above) that appears to anchor the driver to the seat via electromagnets. (I have no idea if the science is sound, but I'd opt for that over a seatbelt any day.) "Entertainment design," writes Belker, "gives me room for the unlimited exploration of new ideas without the drawbacks of real-world application." Escapist ID, I like it.