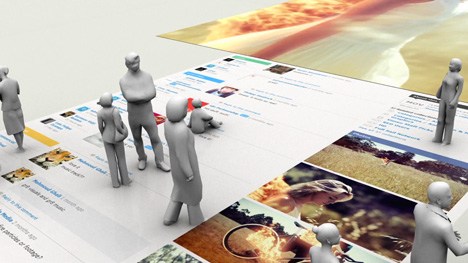 Greg Tran recently completed his degree at the arvard Graduate School of Design, where he won the Thesis Prize for his research on "Digital 3D," a fascinating, if highly theoretical, exploration of the future of augmented reality.People assume we have digital 3D already but this is a fallacy. When you rotate your model on ascreen or watch a Pixar animation is actually just a digital 2d REPRESENTATION of material 3d.What people are calling 3DTV and 3D movies are just a form of shallow depth or Bas Relief, not true digital 3D.

The critical/operative imperative of the digital 3D is that there is a subject moving through space. The digital 3D is in its beginning stages, but will evolve in a similar way to the digital 2D. The digital 2D began as a specialized, singular medium which was largely used for documentation purposes, but has evolved towards personalization, interactivity, fluency and distribution. 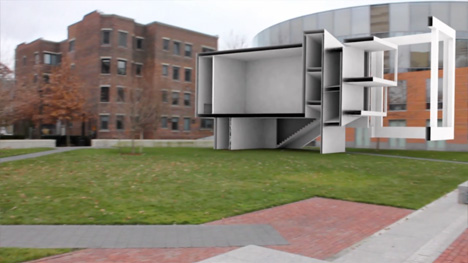 True digital 3D—if (or when, according to Greg's account) it becomes a reality—would essentially blur the line between web sites and real-life ones, including social networking and communication. Tran reimagines the traditional Graphical User Interface as an architectural feature in itself, envisioning a future in which these staid sci-fi tropes will eventually allow for more fluid interpretations of digital 3D-activated interior and exterior spaces.

The full 18-minute version is after the jump...

It's heady stuff for sure, maybe a little more than lunch-break fare, but it's not so much that Tran bitten off more than he can chew; rather, it's a coherent vision for a digital future, where a virtual architecture is not just artificially superimposed on reality but exists as a tangible, interactive framework embedded in space and time.Architecture's ability to mediate spatial and perceptual experience has historically been tied to the inherent qualities of material form and function. However, our lives have become colored by immaterial stimuli as well.

As the material and the digital collapse, potentials for art and architecture are created... New forms of visualization and overlay remove digital tools from the abstract to give them qualities of scale, context, procession and human perspective. This evolution provides an alternative to virtual reality/complete digital immersion and can alter the trajectory of the digital paradigm form a synthetic, universalizing network to a sensitive site-specific condition. 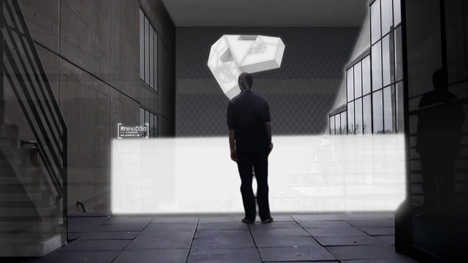