Flatspotting - Wooden Bicycle Frames: "Furniture On Wheels," or Something More? 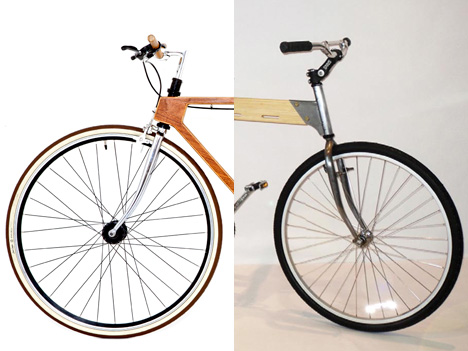 A pair of wooden bicycle frames recently turned up in the ol' inbox, I can't help but take the opportunity to compare and contrast the two designs. 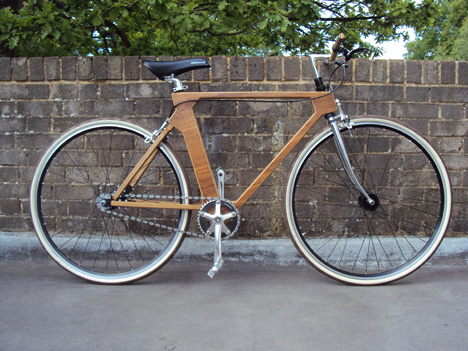 The "Wooden Bicycle" is the first product from Flat Frame Systems, who eventually hopes to produce furniture as the company grows. Their first offering was actually inspired by a television program that Chief Designer Michael Cubbage saw as a child, featuring a futuristic motorbike that had a flat frame as opposed to tubes. (Since then, he's honed his design skills as a technical illustrator and car stylist for GM South Africa.) 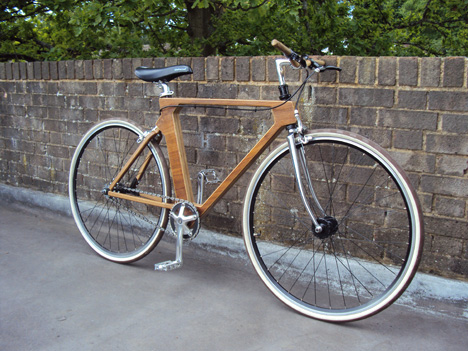 The product description notes that "a wooden bike is the most comfortable bike to ride, as it is slightly flexible," and that it is at least nominally more sustainable that metal bicycles: lest we forget how plants work, the designer reminds us that "while the tree was growing it was absorbing carbon dioxide." 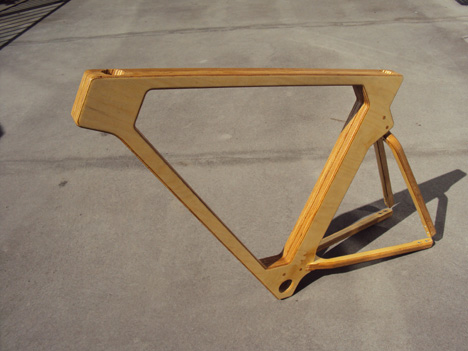 While the frame itself is based on a traditional diamond frame, notable features include a thicker head tube and seat tube, not to mention the flattened seat- and chainstay clusters. As with Jose Rivera's "Ice Cream" flat-pack bicycle concept, it is unclear to whether this there is a functional reason for the skeumorphic form; if not, it might as well look like this.Indeed, considering Cubbage's focus on the aesthetic of the materials, it should come as no surprise that he goes so far to call them "furniture on wheels":The frame is made from "Engineered Wood," which is similar to plywood, but the timber laminates are thicker and can be made from: Beech, Ash, Maple and Oak. The bike frame can also be covered with a high quality veneer (from a 1000 species of trees)...

The bike frame will be "bespoke" and the timber will be unique to each customer along with its numbered and date frame and certificate. 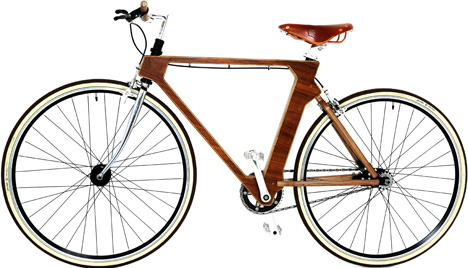 Cubbage founded Flat Frame Systems a year ago; he is pleased to present the fruits of his labor at Tent London 2011, at the Old Truman Brewery on Brick Lane, from September 22–25. 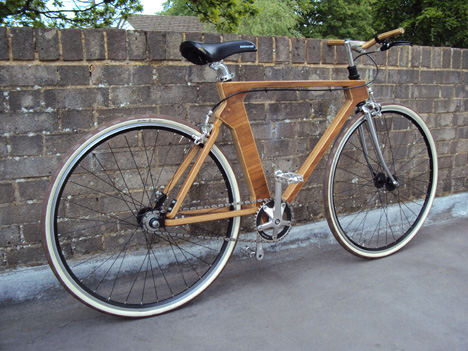 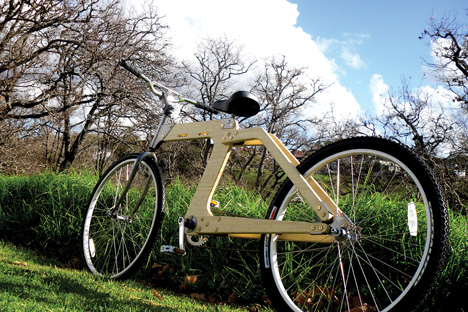 If its (somewhat awkward) name is indication, Paulus Maringka's "Greencycle-Eco" is more ambitious in its design philosophy: it's a pre-fab, flat-pack transportation solution for Third World countries.Taking into consideration production costs, the design pattern of Greencycle-Eco reduces the number of component parts to three different forms with two sets of identical parts being repeatedly cut out using CNC from a bamboo based panel product.

(For the record, the Flat Frame Systems bicycle frame is also CNC-cut.) 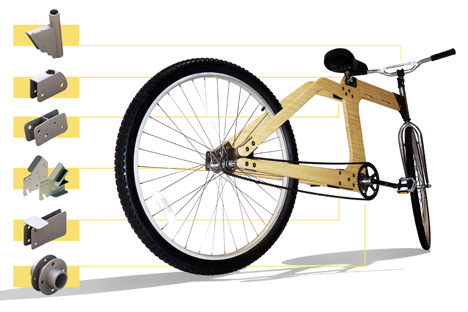 Insofar as the final product is Maringka's thesis project, there is a much deeper—200+ pages deeper, if you must know (PDF)—backstory to his flat-pack bicycle frame.High technology has the connotation of high cost and is normally associated with sophisticated products. Greencycle-Eco explored the use of current technology to help reduce the production cost in order to make it affordable to farmers and the lower income demographic group in Third World Countries, while the strategic design thinking and model can be applied to any First World Country to achieve greater sustainability. 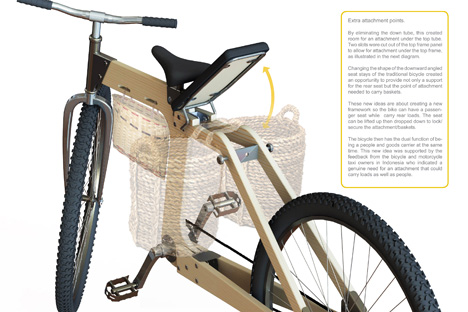 We've seen a similar low-cost transportation solution by Brooklyn's Bamboo Bike Studio, though the "Greencycle-Eco" differs both for its extensive background research and flat-pack aspect. 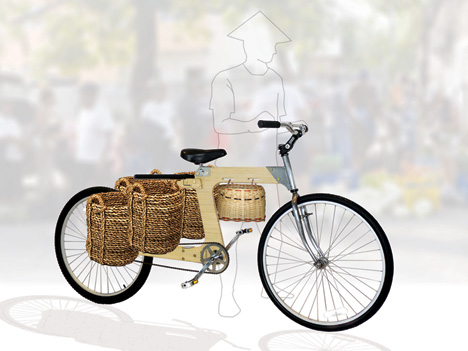 "Standard bamboo panel measuring 1200 x 2400mm can provide enough parts for eight bicycle frames which can be cut out in a short amount of time and reduce the production cost considerably." 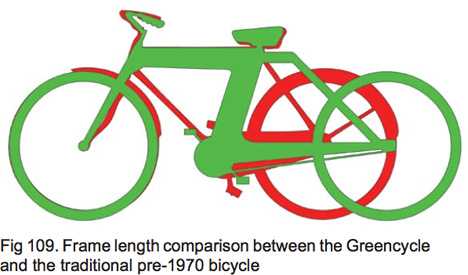 Unlike Rivera's aluminum cutout and Cubbage's more traditional form, Maringka's design is a ways off from the traditional diamond frame: a single inverted L-shaped piece of bamboo serves as the body of the bicycle, serving as both the top tube and seat tube (there is no down tube). The bicycle has no bottom bracket drop, while extended seat- and chain-stays add a bit of versatility:Changing the shape of the downward angled seat stays of the traditional bicycle created an opportunity to provide not only a support for the rear seat but the point of attachment needed to give the target user freedom to develop or customize their bicycle and turn this humble people mover into a form of transportation which better suits their needs and wants without compromising its functionality as a form of transportation or operational safety. 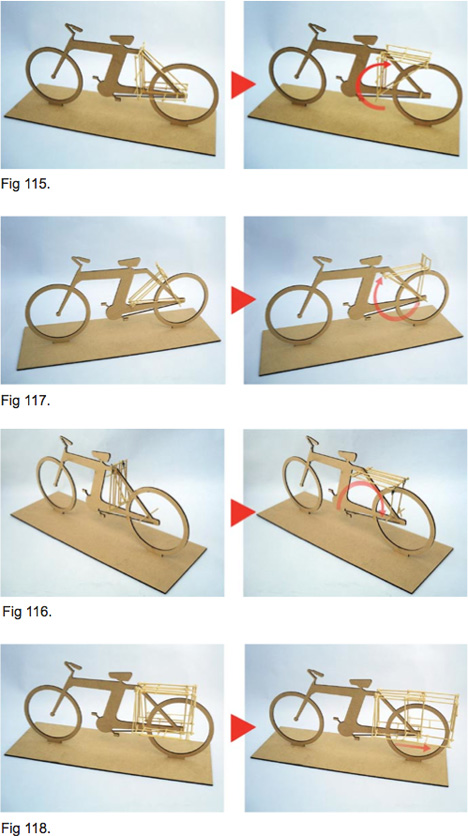 I'm not going to pretend that I've read all of Maringka's research, but he's nothing if not thorough:Bamboo was introduced as a bicycle frame material in 1894 (English patent number 8274) and was shown at the London Stanley Show (1894) where it caused a sensation. These bamboo bicycles were advertised as being lighter and 'better than steel". Twelve models were offered by the company before it closed down in 1899.

Flatspotting - Wooden Bicycle Frames: "Furniture On Wheels," or Something More?