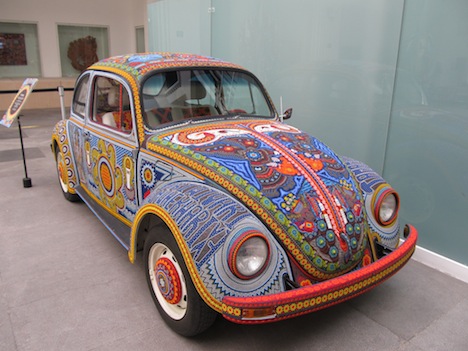 El Vocho as shot by Adrienne Bard in Mexico City.

Combine the iconic Mexican culture expressions of the psychedelic Huichol and a Volkswagen Beetle or El Vocho as Mexicans have nicknamed it—and you get El Vochol, a beaded VW bug. This dynamic manifestation of indigenous folk art is being used to promote the artisan heritage of the indigenous Mexican communities to an international audience.

El Vochol was first commissioned by the Association of Friends of Museo of Arte Popular in Mexico City to elevate the work of traditional artisans in the public sphere both nationally and internationally. The project took on a greater message to the world: indigenous work is not to be forgotten, and in fact, celebrated. Sonya Santos of the Museo says, "People all over the world are responding in a fabulous way....They are all surprised by the magnificent work." 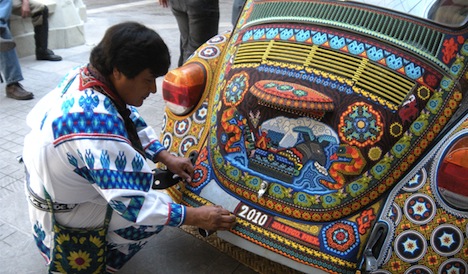 The Huichol, or Wixaritari as they call themselves, are known in Mexico for their intricate bead work lain into beeswax by needle one bead at a time to cover entire objects such as bowls and figurines. The Wixaritari live in the Sierra Nevadas of Western central Mexico and are praised in folkloric markets for their colorful and spiritual works of art produced mainly for tourism. The symbols represented in the bead and yarn work reflect their deep centuries-old shamanic traditions, with veneration to principal deities of corn, deer, peyote, and the eagle. El Vochol is a celebration of culture new and old and offers an opportunity to experience folkloric art in a modern art setting. With VW as canvas,the peyote-trip inspired bead work is propelled to pop culture form.The painstaking magnitude of the project used 2,277,000 beads to cover the body of the car with a special heat-resistant resin. Francisco Bautista, a community elder, designed the cosmic characters on El Vocho, depicting symbols and ritual elements of an individual's inner spiritual journey. Two leading Wixaritari families contributed to the project over a seven-month period.

El Vochol is a welcomed example of how an art form can evolve through time and still maintain its integral substance. This contemporary manifestation of Wixaritari bead work is a spirited campaign in the discussion of "What is Art?" Here, we see that art institutions can create a convergence of tradition and modernity in colorful triumph. By fall, El Vochol will leave Mexico to embark on a global tour, first stopping in Paris and come next year, it will be shown at the Smithsonian in Washington, DC.