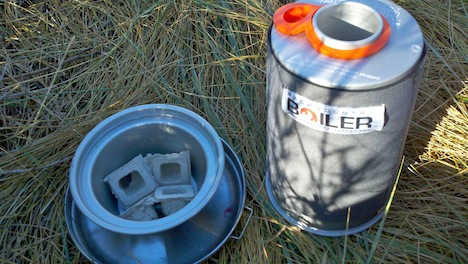 When beginning to build my Ride the Talk campaign for need-based scholarships for the students of MCAD's Sustainable Design program, I stumbled upon a cool Kickstarter campaign for the Backcountry Boiler. Devin Montgomery, a young designer turned entrepreneur, raised three times his Kickstarter fundraising goal with the help of over 500 backers to turn his sustainable design concept into reality. I was immediately enamored by Devin's product that is, "a light and simple way to carry and efficiently heat water in the outdoors using just about any fuel that you can find."

When I decided to "ride the talk" I contacted Devin about making a boiler donation to my trip and he was immediately receptive. Nary 24 hours before I left for Miles City, I received my Backcountry Boiler (#199!). Without the time to put the boiler to the test before I left home, I was a bit nervous about how it would work on the road. Before I ran out the door I quickly read the directions that explicitly said not to discard the recycled cardboard packaging and box, but to instead to use it as fuel for the boiler once in the backcountry. I took his word and grabbed the recycled paper cubes and stuffed them along with a lighter and the boiler into my panniers (bicycle saddle bags). 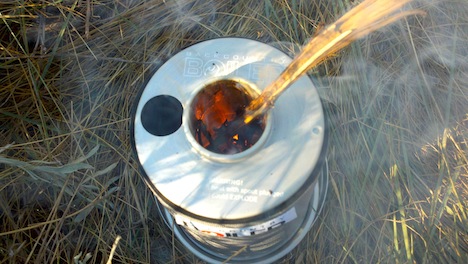 I am happy (and relieved) to report that I have used the boiler daily to make hot drinks, soup, oatmeal, etc. It is easy to use, extremely lightweight (weighing in at just over 8oz!), and boils water insanely quickly. With only a small handful of dry grass, twigs and small branches I have been able to boil water within a few minutes. I love this boiler because I don't have to build a campfire (an especially bad idea in Montana's fire-prone late summers) and I don't need to worry about finding and carrying traditional fuels like gas, Coleman fuel, propane or butane. There's no fear of running out of fuel or fuel leakage, and no extra weight. 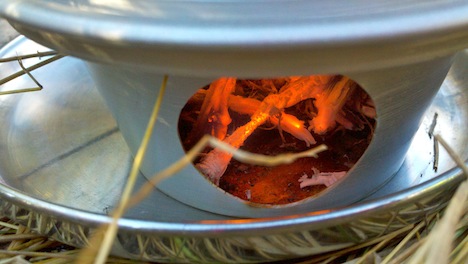 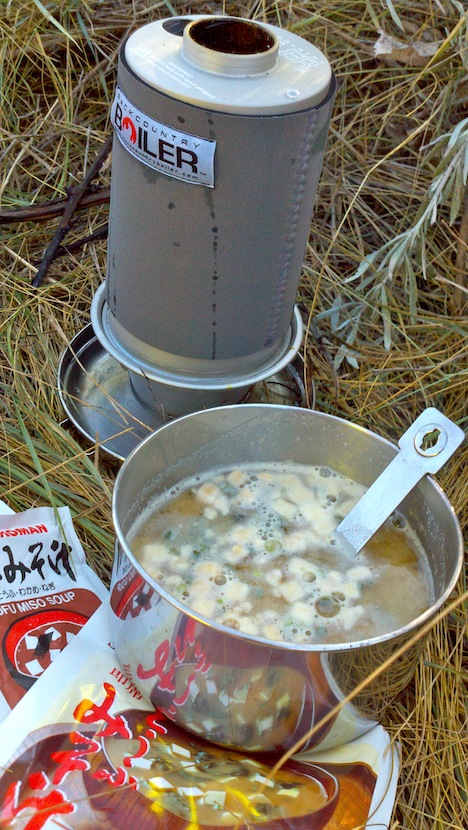 After using the boiler I can safely say that a lot of thought and critical design choices were made to deliver this long-lasting and lightweight product. Devin did an amazing job at balancing simplicity and quality. It's beautiful and multifunctional (both carries water and boils it). From a sustainability perspective, every material choice was thought about carefully and critically, from the boiler itself to the package it arrived in. You can learn all about Devin's product-development process and see videos of him hand-making Backcountry Boilers on his back deck and the Boiler in action at theBoilerwerks.com.

I interviewed Devin a bit about his process as a designer and entrepreneur, and what his hopes are for the future as the owner of Boilerwerks.com.

Cindy Gilbert: How long has it taken to get from product concept to market?

Devin Montgomery: A long time, since this really started as a hobby. From first fully functional prototype to first sale was about 18 months. From refined concept to regular availability, it will have been almost, wow, four years.

What made you decide to become an entrepreneur?

The Backcountry Boiler—an accidental first product—did. It started as a hobby, but the process of taking an idea, bringing it to life, and seeing others draw utility and inspiration from it is amazingly gratifying. Going through that creation process once makes me want to do it again and again.

Why are you concerned about the sustainability aspects of your product(s)?

If there's one industry in which the need for sustainable design is most obvious, it's the outdoor industry. When the whole point of a product is to enrich the way people experience the natural world, it would be absurd for the product not to be made in a way that helps preserve that world. There's just no other way to honestly do it.

What is your vision for your future as a new entrepreneurial designer?

I want to create things that are made well enough that they last a very long time, are designed well enough that people wish they would last even longer, and that are just fundamentally worth all of the costs (monetary and environmental) that come from making them.