About 150 miles south of Miles City lies a place, "conveniently located in the middle of no place." It's called Alazada, Montana, and is home to the Stoneville Saloon and not much else (there is also a convenience store and post office). The Saloon is a place that one must really visit in person to get the real story but I'll do my best to portray why, despite first appearances, the Saloon is doing it's part to be a bit "greener" and is a safe haven of friendliness.

I was delighted to find some form of civilization after 65 miles of riding without shade or access to food or water (or any amenities for that matter)...did I mention that there are no trees from Broadus to Alazada, MT? I was a bit wary that I would roll up to find another ghost town as was my experience with Volburg, MT, a couple of days earlier. I wouldn't say the Alazada was hopping by any means but there was a Saloon and it was open. 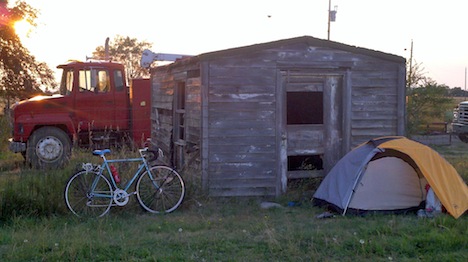 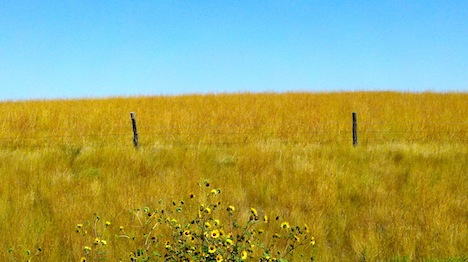 En Route to Alazada, Montana
En Route to Alazada, MontanaI entered the dark bar to find a heavily tattooed bartender with long bleach blonde hair smoking at the bar. (I would later find out that her name was Diane, she was an artist, and that was her tiger-striped jeep parked out front.) "What'll ya have, Hun?" she asked me in a throaty voice. I was so hungry and thirsty I couldn't decide as I looked over the menu spelled out in plastic letters above the bar. All sounded so good yet so bad for me, not to mention the planet. Then, I stumbled upon her locally-raised and harvested bison and venison burgers. Yum. Yes, please. And, add a local microbrew from Missoula. Thanks. 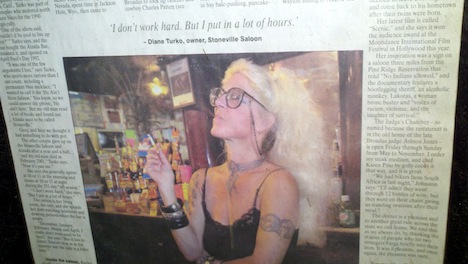 As I waited for my food to arrive I began poking around the establishment. Let me tell you, it could take someone a lifetime to look at every fragment of days gone by in the joint. Everything from mining antiques to Harley paraphernalia to the collection of antlers outside. The Saloon took "reuse" and "repurpose" to a whole other level. 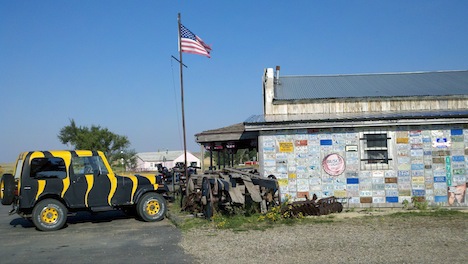 One entire side of the building was sided-in used license plates. A pair of bent motorcycle handlebars stood at the ready over the urinal. The walls of the women's bathroom were papered in the hot guy posters from my youth. The floor was covered in sawdust (to keep the dirt down) from the local sawmill. The list goes on. 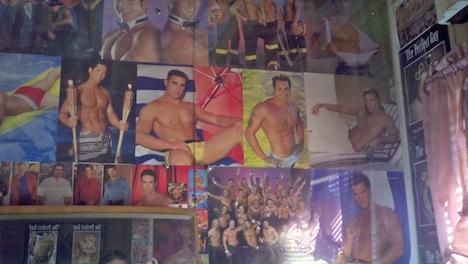 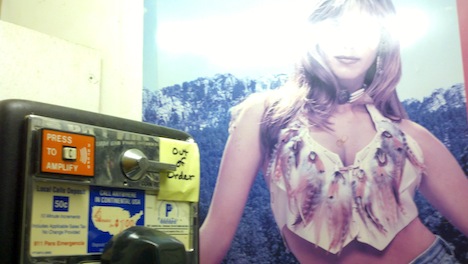 As the day wore on, more and more travelers passed through, mostly bikers headed home from or toward Deadwood, South Dakota, although I did meet a couple from Minneapolis. I was honored and amazed at how many bikers told me I was tough for Riding the Talk. (We were sitting on the bar's "Liar's Bench," so maybe I'll take the compliments with a grain of salt.) 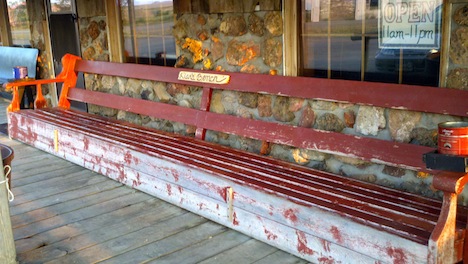 As I watched the stars come out and the moon rise before crawling into my tent beside the old abandoned shack outback, I thought about books and how you simply cannot judge them by their covers. Kindness, generosity and sustainability efforts are thriving in the least expected places, even conveniently located in the middle of no place.