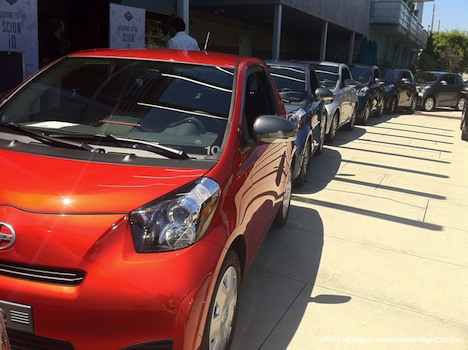 The Scion iQ is a cool and zippy car. The thing is tiny. At 10 feet long, I put it in unimaginable parking spots. At around $15K, it will have a tiny price. And the thing has a tiny, tiny turning radius—it can turn on a 13 foot dime (12.9 according to their marketing materials). While I laughed at the idea at first, when I test drove the car...it really became a talking point. Everyone went out and did donuts in tight alleys during the test drive. It delighted all of us, and we talked about it a surprising amount.

The big idea: It's like a Smart car, but solid-feeling, zippy and nimble. Several people commented that when they turned around while driving, there was the thought "where is the rest of it?" because it really felt like a full-sized car. For a side-by-side totally unplanned comparison, see below. 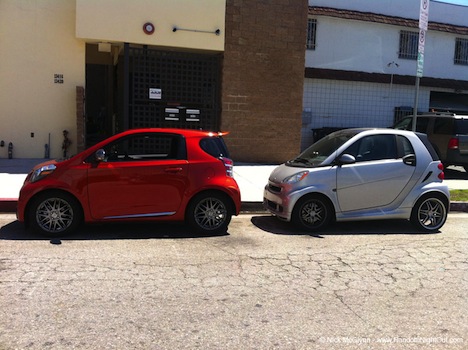 What did they sacrifice for the size? Obviously, there is no way you can get 4 people and their bags in this. But in contrast with the Smart Car, Scion made a clear choice to make this what they call a 3+1 car. It seats two people and some bags very well. But you can get a third person, behind the passenger side. You lose most of your cargo space (You have to choose one or the other) but you can give a ride to 2 friends. I think it should be called a 2+1 car, but that's just me.

How do they do this? With a quick peek under the hood, we see that they moved the differential in front of the trans-axel, making a longer wheelbase and consequently a larger interior, possible. In the pic below, you can see that the wheels are super close to the front bumper. 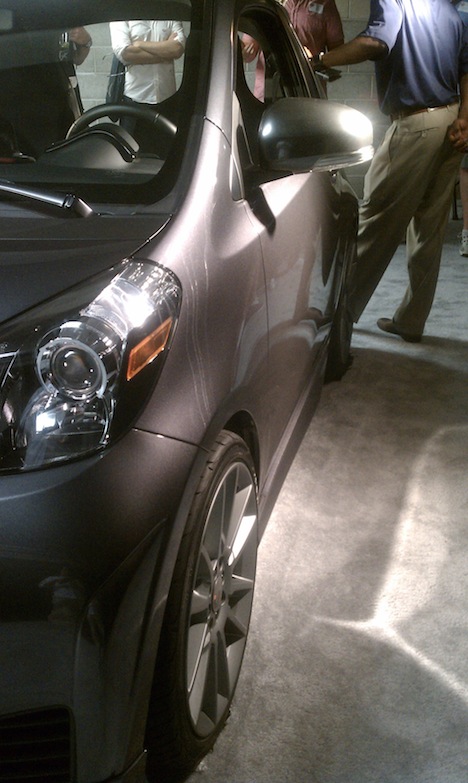 Another invisible change is moving the gas tank from the rear of the car to the front, and flattening it out, leaving more room for cargo and people in the back.They've also made the car fairly wide at 66 inches. That, with the large, square cut doors and broad windshield, it feels pretty comfortable and roomy inside. One visible innovation is the thinner front seats. Although many people didn't notice, the seats are about 2 inches thinner than regular seats, but are just as safe and just as comfortable. Those two inches make a big difference to the passenger in the back.

By putting the "glove box" under the passenger's seat, they gained some inches, to allow the seat to be staggered forward, allowing that passenger to sit comfortably in the back.

The car is filled with design details meant to evoke an upscale car, some of them overdone, but most pleasant. I loved the turning lights on the side view mirrors, and the way the wheels fit snugly into the front of the frame's curves. The model above also had the sweetest rims of any of the vehicles we saw that day. The door handles and center console have a manta ray-inspired theme—glossy black plastic curves and tapers in several places. The photo below is from a press archive—we were playing with more recent models. The details may still change once they're in full production. 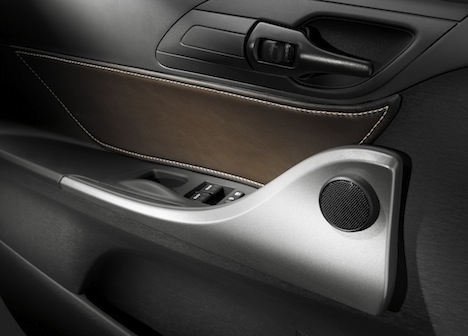 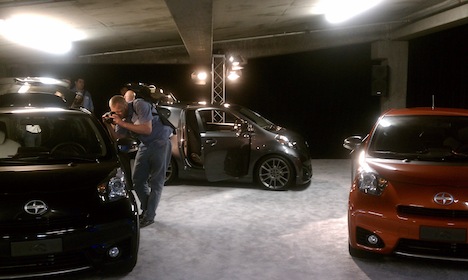 I felt that the red highlights on the edges of the Manta Center console made it look too "stuck on" for my taste (see photos above and below for details)...I wanted to see more integration. But the Scion staff presenting it loved the red trim—and pointed out how it matched the very cool red stitching on the steering wheel...which, by the by, was flattened on the bottom to give more leg room.

Outside, the lines were clean and simple...however, I didn't like the snubby finish to the line of the hood. You can see the curve of the hood responds to the logo...but in an imperfect way. 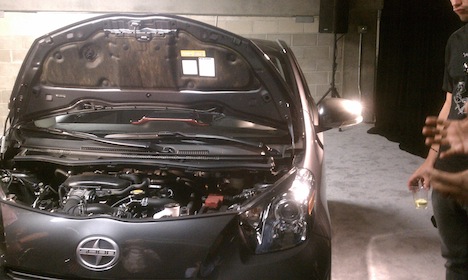 Some models we were shown had optional rear spoilers. The spoilers made a huge difference in the look of the car, broadening its stance and visual weight.

These were pre-production vehicles, so the fit and finish you'll see in the final version next year will change.

I was lucky enough to be included on a short list of people who got to attend the Scion iQ Press Reveal in Manhattan Beach, California. So I boarded a plane and spent 2 days with 24 other design bloggers being wined, dined, and educated about the Scion brand and outlook. Oh, and we also got to hear Mark Mothersbaugh speak.

Kicking off the event, Jack Hollis, the Vice President of Scion explained the brand and its strategy to us: Scion's purpose is to get young people into the car market, in service of the larger Toyota-Lexus universe. He was not interested in selling the most cars, just selling them to the right person.

One way they do this is by having much shorter product lifecycles than traditional car manufacturers. This keeps the line fresh—you can't buy the same car as your older brother did 6 years ago. After 3-5 years, the car is gone...so get them while they're hot, yes? The likes of Ford and GM will keep cars and platforms around for ages...Scion never wants to have a Honda Civic or a Ford Taurus.

They showed us internet videos they hoped would go viral, print ads in formation and promotional 3D movies and interactive spaces that would all go towards defining the attitude and desirability of the vehicle. The 3D movie was, in the middle of the (short) show, enhanced by a bubble machine. There were 3D bubbles in the movie, and real bubbles in the air. It freaked me out for a second and got a laugh from the audience. The movie isn't online yet, but was an awesome pastiche of a variety of visual styles, tied together into surreal and very cool stereographic world. Look out for it...

Scion tries to make buying a car easier for the young entrant into the market. They have one simple base price and one basic configuration—so you know what you're getting for the price. They call this Mono Spec. All you have to do is choose your color. There isn't a CX and a CXi and CXltd. But Scion accessorizes the hell out of their vehicles, meaning that you can easily pay more than the base price, tricking it out with floor mats, sweet rims and spoilers.

As the sun set, Mark Mothersbaugh of '70s band Devo came on stage for an interview followed by a Q+A session. Mark Mothersbaugh is a cool cat...and still crazy after all these years. I enjoyed hearing him talk about Devolution and seeing how much being a dad changes a man and his outlook. Who wants to be on tour all the time when you have a family? 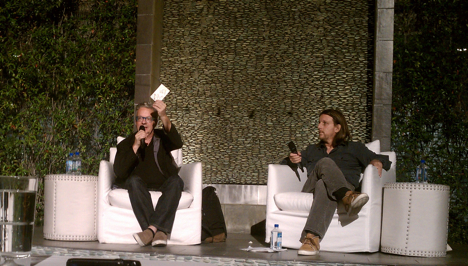 What does this have to do with Scion? Ostensibly, nothing. But one thing I learned about the Scion brand is that they really do invest heavily in the arts as part of their marketing efforts...music and visual art is really core to their brand identity. At the end of the event, I felt like I had met the car and the people behind it.