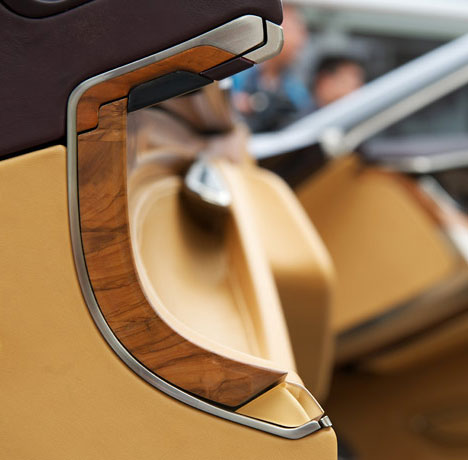 Cadillac's Ciel concept car has a dashboard and seatbacks with wooden accents. At first you think "Big deal, I've seen that before"; but look closer and you realize the wood isn't veneer—it's solid. 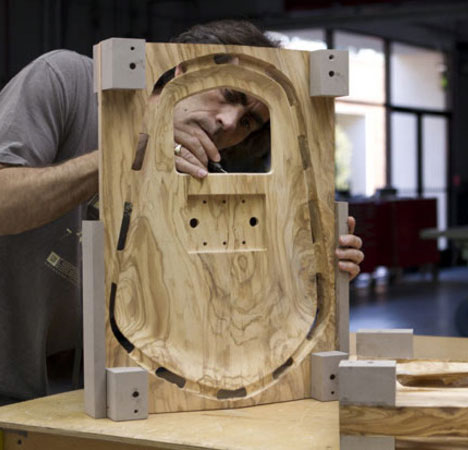 CoolHunting's got the skinny on how GM's Global Design Studio, combining old and new manufacturing techniques, CNC'd the crap out of some rare, 300-year-old olive wood after running it through a 70-year-old planer:The journey began on a beautiful planar [sic] from the 1940s, which took on the 30" wide trunk with ease. The planks were sanded, photographed, and aligned on a gantry mill (a large platform designed for cutting planks) with their outer skin still on. Registration holes were drilled, and XYZ coordinates taken. The planks were then replicated in Alias's Autostudio using texture and planar maps, which enabled Alessando to analyze the grain and develop a very intricate map of from where each piece would be cut. An incredibly complex 3D puzzle, each piece needed to be cut around the tree's knots and splits while also ensuring that the grain direction and tree ring orientation matched. There was only one trunk to work with, and every piece had to be accounted for.

To those concerned with sustainability issues, the tree died a natural death, so to speak; it had fallen in a storm rather than being cut down for the purpose. And while three-century-old trees aren't likely going to become a fixture on Cadillac's mass production line, it's neat to see the manufacturing attention lavished on this one.