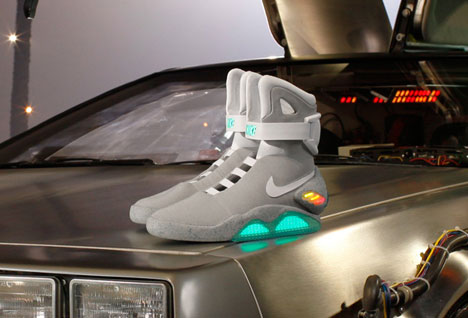 The sneakerworld is abuzz with news of the 2011 Nike MAG, modeled after the self-lacing kicks Michael J. Fox wore in Back to the Future 2. Only 1,500 pairs are being made, sold exclusively through eBay, with the net proceeds going to The Michael J. Fox Foundation for Parkinson's Research. 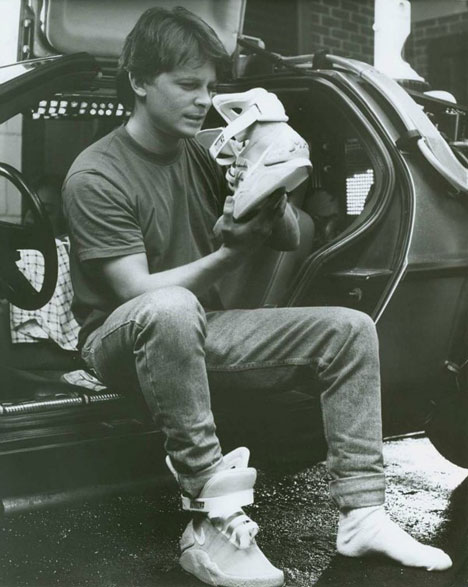 The MAGs are physically modeled after the ones in the movie, though sadly, they lack the cool self-lacing feature; there are rumors that a Nike exec has hinted that it'll be available in 2015, but it's not clear whether he was joking or not, as that was the year the movie took place.

Why, you ask, are they called the MAGs? The original technician who worked on the sneakers actually seen in the movie gave the story to Sneaker News:Back in 1989 I worked in the Nike Sport Research Lab as the Electronics Technician. The original BTF2 shoes for the movie were built by hand in the Nike Sample Room, and I was the one who designed and installed the electronics for them.The lights in the side of the midsole and the Nike logo on the ankle strap are electro-luminescent panels, and there is an array of six randomly flashing LEDs on the side of the heel that were never visible in the movie

They were originally called "Slamball Shoes," and that's what most people called them around Nike. There was supposed to have been a scene in the movie in which Marty plays Slamball, a game like 3D racquetball where the participants wear magnetic shoes which allow them to climb up the walls. That scene was never shot because the cost of building a huge room on gimbals to create the effect was too great.

The REAL name of the shoes in Marty McFly's world of 2015 was the "Nike Mag" because of their magnetic properties, and that's what is molded in the back of the heel.

At press time the auction bids, which can be viewed here, were in the $2,000 range.