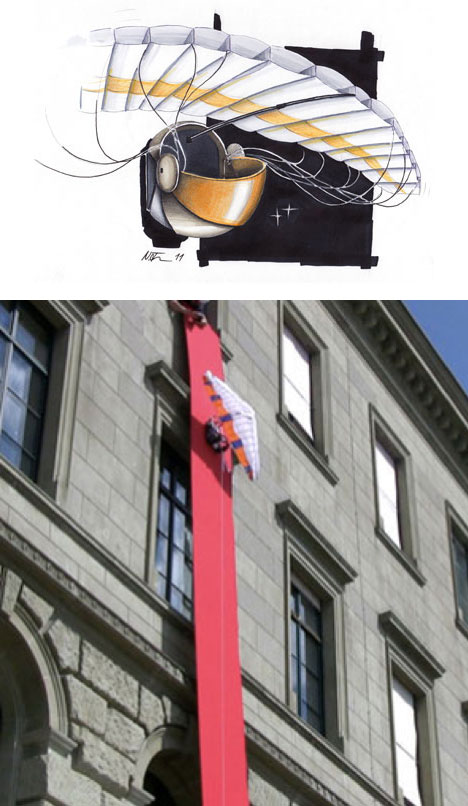 While you've heard of Disney's Imagineers, you've probably never heard of Disney Research. That latter organization is a collection of research labs that partners up with schools like Carnegie Mellon and the Swiss Federal Institute of Technology (ETH), providing a kind of decentralized creative skunkworks.

Their latest project (this one done in conjunction with ETH and not Carnegie Mellon) is the Paraswift, a robot that travels upwards via a climbing mechanism, then releases itself from the vertical surface and floats downwards through the air via paraglider. A team of industrial design, mechanical engineering and electrical engineering students at ETH helped develop the robot, which was designed for "technology with entertainment factor," though it will hopefully be paired with real-world applications someday. "Our robot should not just inspire from a technical point of view," write the students. "Together with industrial design students we are intent to bring function and design together."

Video of the jump after the, um, jump...

Okay, just thought of an application: Forget Disney's theme parks, I want to see the Paraswift adapted for use by Manhattan restaurants and take-out joints. The 'bots can climb buildings, delivering lunch directly to my window, then sail back down to street level. While I'll look silly yelling "Hey, you forgot the duck sauce!" out of my window at a paragliding robot making its descent, at least I won't have to tip the guy.