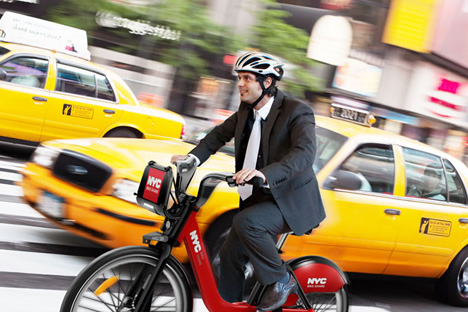 Yesterday, the transportation world was abuzz with the news that New York City had finally selected Alta Bike Share for the city's forthcoming bike share program. The Portland, Oregon transit company runs similar programs in Boston and Washington, D.C., which have 61 and 110 stations respectively; the NYC program will be an order of magnitude greater in scale, with 600 self-service, solar-powered stations for 10,000 bikes—which is certainly ambitious, but not even close to Hangzhou's 50,000 bike system. (According to Wikipedia, there are currently 468 subway stations in New York.)

At launch, which is currently set for summer 2012, the program will extend from 79th Street in Manhattan down to Park Slope and Bedford-Stuyvesant in Brooklyn (no definite borders given). Naturally, "options for additional stations in other boroughs are also being explored." The fee will be "under $100" annually for 24/7/365 access to bicycles in the system; trips longer than 30-45 minutes will incur minor fees as well.

If these details seem a bit vague, it's largely because the bike share program is still a work in progress, pending input from local communities, user testing, etc. The official website—where New Yorkers can suggest station locations, whether or not they're within the initial range—is nyc.gov/bikeshare. (Streetsblog reports that in the past 24 hours, since the site went live, "people have suggested more than 3,200 station sites and submitted more than 13,000 up or down votes on them.") 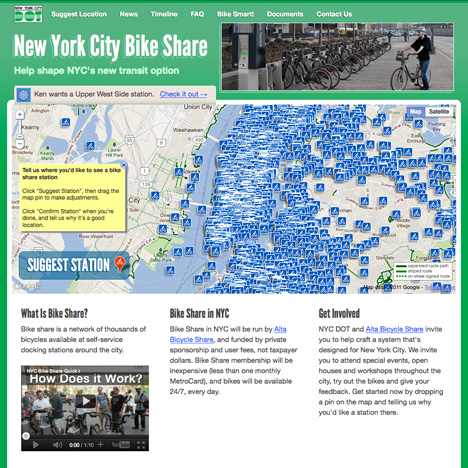 Promo video after the jump:

The City's Transportation Commissioner Janette Sadik-Kahn, who was recently the subject of a lengthy profile in the Observer, made the announcement yesterday:

Read the press release here (PDF). For a second opinion, The New York Times has a slightly more pragmatic, if not outright pessimistic take on the bike share program. 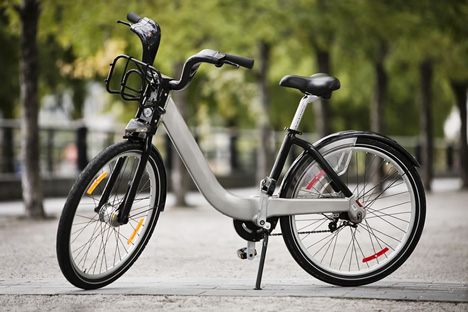 via Streetsblog, who also have more details about the business end of things.