Small in the City: VW Up and the Aston Martin Cygnet

Small city cars are a constant fascination of designers. Perhaps it's the challenge of creating a desirable car with a very limited budget. Or, perhaps it's our constant search for something a little different. In any case, this summer has seen two of the most significant small car releases in years. These are the VW Up and the Aston Martin Cygnet. One represents maximising a limited sales price, the other one tests just how much customers will pay for a pint size car.

The VW Up is based on a 2008 concept car of the same name. The concept featured a rear engine, just like the original VW Beetle. The design also looked back, but not quite so far. The design is a welcome return to the restrained, proportion- and detail-driven VW designs of the late 1990s (Passat & Golf in particular). 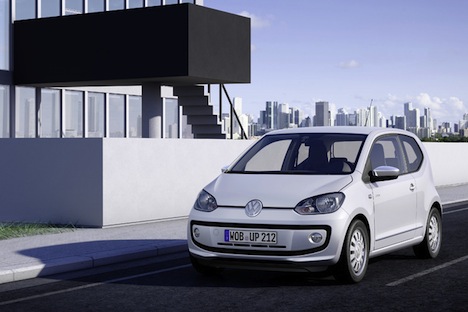 The production of the VW Up was converted to a conventional front engine, front wheel drive layout. Luckily, the crisp styling remained, albeit modified. It features ultra-short overhangs in spite of only increasing demands of safety on cars. Unique features include an all-glass rear hatch, which beautifully integrates with the rear lights. Also, the front bumper appears to float inside the wide grille, a wonderful graphic touch. As for the interior, VW has bettered their consistently high quality interiors with technology and space. The Up concept featured the rear engine layout to liberate as much passenger space as possible. The VW engineers managed to save this space in spite of the layout change. Also, VW will feature a tablet-style multi-media system called "Maps+more". The interface is housed in a removable tablet that sits atop the dash. It will feature downloadable applications and information. 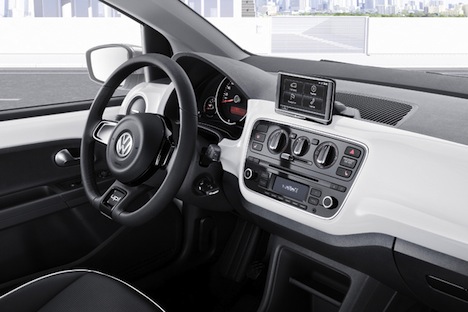 VW has high demands for the Up. They will sell it globally (possibly even the US) to replace their ageing Lupo, which was cute, but never the class leader that the Up promises to become. VW hopes this can punch sales up to 1.5 million. Prices will be around 8,500£ (for perspective, the larger Toyota Yaris starts at 11,000£).

At 35,000£, the Aston Martin Cygnet is clearly oriented towards a completely different market. The Cygnet is the result of multiple forces acting on Aston Martin: increasing European emissions standards and the challenge of expanding their model range away from their large sports coupes. For years, Europe has been threatening minimum fleet emissions standards. They would work similar to the US CAFE fuel economy standards—an average of all the cars offered by the manufacturer adjusted for sales volumes. This wasn't a problem when Aston Martin was a member of the Ford group, where it's large sports cars would have been offset by Ford Fiestas. But now that Aston is on its own, it needs to find a way to bring its emissions down or pay large penalties and restricted sales in their principal European market. Aston decided to make lemonade with lemons by selling a micro city car to offset their larger cars. 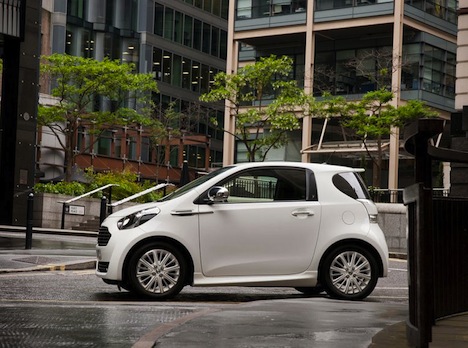 Instead of trying to develop their own small car—an insurmountable challenge for such a small company—they decided to go shopping for a solid base. They found it in the unique Toyota Scion iQ (I like to pronounce it "ick" in protest of the lack of creativity in Toyota's marketing department). The iQ is one of the smallest cars available, barely longer than a Smart, but featuring a wild 3 seat layout (two in front, one behind the passenger seat which can be moved forward of the driver). It also features the ultra-low emissions that Toyota is known for.

The Aston design starts when the rolling chassis gets to Aston-Martin's Gayson, England factory. New bumpers, lights, hood, wheels, sides skirts, a rear spoiler and door handles get bolted on. After that, it get the same 7-coat hand finished paint job of any other Aston. The design vastly improves on the Toyota, which was always a bit odd with its mix of odd proportions and avant-garde surfacing. The Aston substitutes the surfacing for a wide and classy aluminum grille in front and a pair of swoopy tail lights. 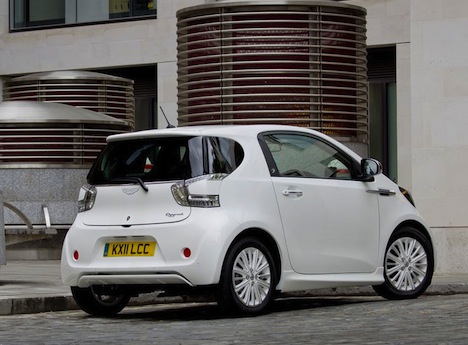 If the exterior seems radically reformed, the interior is absolutely unhinged. Aston covers every inch in hand-bag quality leather and alcantara—including the headliner! The door pulls, gear lever surround and armrests are replaced with bespoke metal parts. It all adds up to an interior that is certainly deserving of the Aston Martin name.

So far, Aston has orders to fill their first year forecast of 1,500 cars.

Fans of small cars be warned—exciting times are here!

Small in the City: VW Up and the Aston Martin Cygnet